The eternal christ in the cosmic story 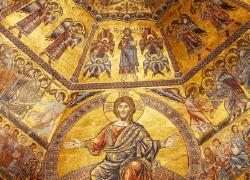 Fr. Richard Rohr is a Franciscan priest of the New Mexico Province. He founded the New Jerusalem Community in Cincinnati in 1971, and the Center for Action and Contemplation in Albuquerque in 1986, where he presently serves as its founding director. He is a regular contributor to Sojourners and Tikkun magazines, and the author of books such as Everything Belongs: The Gift of Contemplative Prayer, Things Hidden: Scripture as Spirituality and Adam’s Return: The Five Promises of Male Initiation.

He is a sought-after speaker and retreat giver. Themes he addresses include the integration of action and contemplation, community-building, peace and justice issues, male spirituality, eco-spirituality, and the cosmic Christ. In this section, NCR’s Rich Heffern talks with Rohr about this last subject, how Jesus fits into the new universe story.

Heffern: At Christmas Eve Mass in my parish every year I hear the proclamation of the genealogy of Jesus, Christianity’s central figure, stating that all of creation is only a few thousand years old. I wince when I hear it because of the update we got that is the cosmological story science has been telling us for the last hundred years. It’s Christmas though, and I want Jesus, together with the update. How does Jesus fit into that new story from science that tells us the universe is 14 or 15 billion years old and our Earth at least 5 billion years old?

Rohr: Much of Christianity has made Jesus Christ into a denominational savior figure while others have looked upon his saving grace as limited to a few who meet strict qualifications. But what about creation as a whole? How far back and forward in time does the Christ figure extend, and who exactly is Christ?

Christian scripture, in fact, gives us Jesus’ place in that history counted in billions of years if you look for it -- in the prologue to John’s Gospel, for example, or in the Pauline hymns of the letters to the Colossians and Ephesians, or in the opening of John’s first letter. All speak of Christ existing from all eternity. We just don’t see those references. They’ve never been unpacked for the majority of Christians, and we don’t have theology to know how to see it.

Christ is not Jesus’ last name. The book of Acts says God has raised up Jesus and anointed him as the Christ. Our new awareness of the cosmos’ vastness and unimaginably ancient history is forcing us to rehear those scripture texts. It’s exciting good news. The Jesus we now have, the Jesus we participate in, are graced by, are redeemed by, is the risen Christ, the eternal Christ. The word “Christ” means “the anointed one,” and that anointment by God includes us and all of creation.

The Gospels are about the historical Jesus. Paul, however, whose writings make up a third of the New Testament, never talks about that Jesus. He is talking about the Christ. Jesus is the microcosm; Christ is the macrocosm. There is a movement between the two that we ourselves have to imitate in our life and walk, the resurrection journey.

Western Christianity has plucked Jesus completely out of the Trinity. The historical Jesus has become the new monotheistic God -- God the Father for all practical purposes. Once you no longer have a Trinitarian view, you no longer have a dynamic view of God. When you emphasize Jesus apart from the Father and Holy Spirit, then creation is just an afterthought or a backdrop to a limited salvation drama, “an evacuation plan to the next world,” in Brian McLaren’s phrase. We become preoccupied with those last three hours of Jesus’ life, when we get the blood sacrifice that gets us humans saved, our ticket to heaven punched. Protestants are somewhat worse than we are on this, to be honest.

The real trump card of Christianity is not just that we believe in God. The mystery we are about is much more than that: It’s that the material and the spiritual coexist. It’s the mystery of the Incarnation.

Once we restore the idea that the Incarnation means God truly loves creation then we restore the sacred dimension to nature. We bring the plants and animals and all of nature in with us. They are windows into the endless creativity, fruitfulness and joy of God. We assert that we believe in the sweep of history, humanity and all of creation that Christ includes.

Incarnation is already redemption. Bethlehem was more important than Calvary. It is good to be human. The Earth is good. God has revealed that God has always been here.

It’s a Franciscan approach, and indeed was the theology of key Franciscan figures like Duns Scotus and St. Bonaventure. It will increasingly become mainline spirituality as we become more comfortable with an expanded view of the mystery of Incarnation in the cosmos. If we Christians had taken this mystery seriously, we would never have raped the planet like we do, never have developed such an inadequate theology about sexuality.

What does the Resurrection mean in this more cosmic view?

Resurrection fits into this shift in point of view beautifully and necessarily. Jesus died, Christ arose. That’s precisely what the transformation is -- Christ’s consciousness untied from a specific place and time.

When I was studying systematic theology back in the 1960s, my professor put it this way: If a video camera had been present at the moment of Jesus’ resurrection, we would not have seen a body leaving the tomb but probably a vast flash of light as that limited human body that contained Jesus became identified with something beyond space and time. It’s a way to understand the Resurrection. That’s why you and I have access to Christ. It’s why Jesus can say he is with us until the end of time and available everywhere. You can see the New Testament’s Resurrection stories saying precisely that. The angel asked, “Why are you looking up to the heavens for him?”

The opening of John’s letter tells us that, in Jesus Christ, what existed from the beginning is now reachable, touchable, knowable, seeable and lovable. We humans can’t fall in love with a concept, with something that is just pure energy. The gift of the Incarnation is that we have someone now we can see, touch and love.

Also, until we saw Jesus we couldn’t imagine what God was like. We come at God inductively. Start with Jesus then we know what the heart of God is like. Then we can move backwards to the cosmic Christ who exists from the beginning. Then we live in a coherent universe where there is no division between the natural and the supernatural. That’s the unique message of Christianity, that there is nothing God is not available to.

“From the beginning” means from the time of the Big Bang 14 billion to 15 billion years ago. Duns Scotus said the first idea in the mind of God was the Christ, and what the Christ means is the confluence of divinity and physicality, spirit and matter. When the material and spiritual worlds coexist, we have Christ. Medieval icons always depicted Jesus Christ holding up two fingers, proclaiming in fact, “I am fully human and fully the son of God at the same time, and I hold these together. My divinity does not cancel out my humanity.”

The Vatican last month hosted a meeting of the world’s scientists to discuss the possibility of life elsewhere in the universe and the implications of that for Christian theology. When you think of how our idea of Jesus would fit into a universe possibly teeming with life, an image comes of Jesus trudging across the light years lugging a cross.

If we don’t have a more developed theology of the cosmic nature of Christ, then if the discovery of extraterrestrial life happens -- and there’s a good chance it will -- we will be in major trouble.

If Jesus becomes more the Christ, does he also become more remote from us?

Just the opposite: Everything that happens to Jesus must happen in our individual souls as well. The Incarnation means the divine indwelling is not out there, over there. It happens within us. This movement from Jesus to the Christ means that the same anointing that was given to Jesus is given to all of us. That’s why he didn’t say, “Worship me.” He said, “Follow me.” We’ve projected more onto Jesus than he ever asked for.

Also Jesus didn’t move from Jesus to the Christ without death and resurrection. And we ourselves don’t move from our independent, historical body to the Christ consciousness without dying to our false self. We, like Jesus himself, have to let go of who we think we are, and who we think we need to be. We have to become the naked self before the naked God. That will always feel like dying. We need to know, experientially, that naked, undecorated self is already and forever the beloved child of God. Jesus’ life is also our life.

Carl Jung called Christ the archetype of the soul. Jesus came forth from God, was initiated in baptism, went through a normal growing up then developed a ministry, was rejected, suffered, died and ascended -- returned back to where he came from. We all go through that journey of transformation that returns us to where we began but with a freer consciousness.

We’ve turned Christianity into that evacuation plan for the next world. The term “cosmic Christ” reminds us that everything and everyone belongs. We’re all unworthy but the mystery of the Incarnation means the divine indwelling is in all of us. We’re indeed the body of Christ. God’s hope for humanity is that one day we will all recognize that the divine dwelling place is all of creation. Christ comes again whenever we see that matter and spirit coexist. This truly deserves to be called good news.

Rich Heffern is an NCR staff writer. His e-mail address is rheffern@ncronline.org.

Spirituality | The eternal christ in the cosmic story

Walk the walk: a vocation of justice

Love can shine through our evolving faces

The commonplace magic of Spring