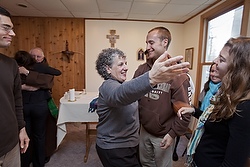 Susan Slavin reaches out to her fellow lay missioners during her commissioning service at the Franciscan Mission Service house in Washington Dec. 2. The Mass included a "call to mission" and blessing as Slavin readies herself for her first assignment in Nairobi, Kenya. (CNS photo/Nancy Phelan Wiechec)

WASHINGTON -- In the sparse chapel of a house tucked in a Washington neighborhood, a 62-year-old New York trial lawyer pledged to devote the next two years of her life to serving those in need in Nairobi, Kenya.

About 12 people in the congregation at the headquarters of the Franciscan Mission Service prayed for Susan Slavin as she vowed to "share the good news by living, praying and working with the poor."

"It doesn't get better than this" said Slavin at the end of Dec. 2 Mass while she hugged everyone.

For some, her enthusiasm could seem surprising. After all, she is about to leave behind waterfront property on Long Island, her law practice of 25 years and the most challenging aspect for her -- a 3-month-old grandson -- to live without luxuries, away from friends and family while facing new challenges thousands of miles away.

But Slavin is confident this is something she is called to do.

She said it was hard to leave her law practice but she knows she'll come back. It will be really hard to leave her grandson but she intends to talk to him daily and even read books by Skype, an Internet phone service.

What may be the most difficult adjustment for Slavin is knowing that during the next two years she won't have all the answers. As a lawyer, she's accustomed to cut-and-dried explanations and if she doesn't know them, she looks them up. But the law books and research materials won't help her in her mission role.

What will help, she thinks, is the three months of training with the Franciscan Mission Service that she described as being "harder than law school and studying for the bar."

During the mission "boot camp" she and other up-and-coming lay missioners not only learned practical aspects about the work ahead but also studied the Bible, Catholic social teaching, advocacy work and ways to effectively serve others.

Slavin is equipped to depart Jan. 18 with lessons learned from these seminars and also from the handful of missionary experiences that brought her to this moment.

In an interview with Catholic News Service right before the commissioning Mass, Slavin said the idea of doing missionary work took root for her 10 years ago when she was asked by her pastor at Our Lady Queen of Martyrs in Centerport, N.Y., in the Rockville Centre Diocese, to chaperone teenagers from her parish on a short mission trip to West Virginia.

The priest might as well have asked her to go to Africa since it was such a foreign concept to Slavin, a single parent of two grown children with her own law practice. Little did she know the experience would exceed her expectations and only make her want to do more.

She then went on short medical mission trips to her parish's sister parish in Nicaragua and a one-month mission to Mississippi with Franciscan Sisters and another month in Kenya with Maryknoll Lay Missioners.

Still wanting more, she looked for other mission opportunities in the book "Response," a guide compiled by Catholic Volunteer Network that lists available volunteer opportunities with Catholic and other Christian programs.

Franciscan Mission Service jumped out at her from the catalog because of the appeal of St. Francis and the group's two-year time commitment. She said she was not alone in finding the mission group this way.

Kim Smolik, executive director of Franciscan Mission Service, said most of the volunteers are either in their 60s or their 20s as both are at stages in their lives when they can more easily take two years off. Often couples sign up together.

Two other volunteers about to begin their two-year stint with Franciscan Mission Service are Michael Redell and Kitzi Hendricks. The two, in their 20s, had their commissioning Mass Dec. 4 and will be sent to Bolivia Jan. 12.

Hendricks, 22, is a recent graduate from Creighton University in Omaha, Neb., and Redell, 26, is a former basketball player with Western Michigan University who spent the previous year teaching and coaching at a school in Alaska.

Both have had some mission experience that made them, like Slavin, only want to do more.

For them, the choice to do mission work did not involve leaving a lot behind, but it was definitely a countercultural decision to postpone a career, or in Redell's case, "turn down a job" he loved.

Hendricks faced concerned questions from family members about what she would do when she finished this work and how she would make money to pay off student loans.

Those who know her well didn't even ask, most likely because they always knew she would do something like this. Hendricks is optimistic, viewing the next two years and beyond calmly, hoping above all to make an impact and be challenged beyond her comfort zone.

Six-foot-tall Redell similarly regards upcoming challenges in a broader perspective because as he sees it, mission work is "so much of what Christ calls us to."

"It is walking out the Gospel," he said.

What the world needs now