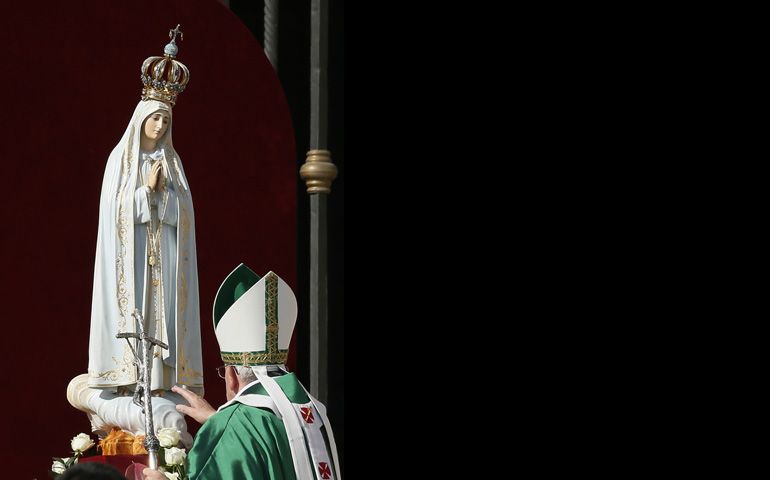 Pope Francis touches a statue of Our Lady of Fatima at the start of a Mass in honor of Mary on Oct. 13, 2013, in St. Peter's Square at the Vatican. (CNS/Paul Haring)

Vatican City — From Easter to Pentecost -- and especially during the Marian month of May -- Catholics recite the "Regina Coeli" prayer "with the emotion of children who are happy because their mother is happy" that Jesus has risen from the dead, Pope Francis said.

Although his devotion to the Mother of God is profound, it is simple in many ways: Mary is a mother to every believer; Jesus would not leave his followers orphans.

While his connection to Mary clearly is a matter of heart and mind, it is also physical. Whenever Pope Francis passes a statue or icon of Mary, he kisses it or allows his hand to rest tenderly upon it.

Honoring the Mother of God, of course, is a solid part of Catholic tradition and a mainstay in the devotion and teaching of the popes. St. John Paul II's motto, "Totus Tuus" ("All yours"), and the large M on his coat of arms were just the most graphic elements of a devotion that led to a whole body of teaching about Mary, her role in Catholics' faith life and the importance of praying the rosary.

Pope Francis would not have an argument with any of St. John Paul's Marian piety or discourse. But there are differences.

"The sense of Pope Francis' devotion to Mary is a little more personal, more intimate" than John Paul's was, said Redemptorist Fr. Sabatino Majorano, a professor at Rome's Alphonsianum Institute. Pope Francis expresses "that feeling that exists between a son and his mother, where I think Pope John Paul's was more that of a subject and his queen."

The difference, he said, comes from their roots: Pope Francis' Latin roots -- not just in Argentina, but also from his Italian family -- and St. John Paul's Slavic, Polish culture.

Retired Pope Benedict XVI spoke and wrote less about Mary than his predecessor and successor, but one now-solid Marian custom began in his pontificate: Whether or not it is a Marian feast day, a statue of Mary is placed prominently near the altar at papal liturgies.

Pope Francis' habit of touching images of Mary is a typical Latin American gesture, one Majorano said he saw repeated thousands of times at Brazil's Shrine of Our Lady of Aparecida, which is staffed by his brother Redemptorists. "The tactile experience is part of praying. It's a spirituality that takes flesh, becomes concrete; it is not just an idea or a theory."

At Mass and other formal liturgical services, Pope Francis uses incense to bless the Marian images. He notices the images and often comments on them.

In Caserta, Italy, in July 2014, Pope Francis celebrated the feast of St. Anne, Mary's mother. A locally loved statue of St. Anne holding the hand of her little girl, Mary, was placed to the side of the altar.

In his homily, the pope said, "When I was using the incense, I noticed something very beautiful: The statue of St. Anne does not have a crown, but her daughter Mary is crowned. St. Anne is the woman who prepared her daughter to become queen, to become queen of heaven and earth. This woman did a great job."

Visiting Naples in March, Pope Francis told priests, nuns and seminarians that one way to make sure Jesus is the center of their lives is to ask "his mother to take you to him. A priest, a brother, a nun who does not love Mary, who does not pray to her -- I would even say one who does not recite the rosary -- well, if you don't love the mother, the mother will not give you the Son."

In the same talk, the pope spoke again about how he recently read The Glories of Mary, a hefty book written in 1750 by St. Alphonsus Liguori. "In this book, I like reading the stories about Mary that are behind each chapter; in them you see how Mary always leads us to Jesus."

Majorano, an expert in the writings of St. Alphonsus, said he and his confreres were not surprised to hear Pope Francis praising the 265-year-old work of their founder.

The style St. Alphonsus uses to speak of Mary reflects the Latin culture he and the pope share -- "warm, written with the heart more than the head, although it is intelligent," Majorano said. "In general, St. Alphonsus in his books shows a great knowledge of patristic works and other church writers -- he cites them continually -- but this work on Mary is written more with the heart."

The two focal points of St. Alphonsus' life, he said, were "the crucifix as an expression of God's love -- not his justice -- and Mary. They were the two realities that motivated his preaching and what he proposed in his missions."

St. Alphonsus focused on Mary's role as the "Queen of Mercy," the Redemptorist said. "The basic characteristic he emphasizes is that Mary is God's welcomer; that is, when we are afraid to approach God because of our sins, she welcomes us and helps us turn to him. So, her mercy is acceptance and her mercy is her ability to intercede for us and her mercy is to always anticipate our needs, like she did at the wedding at Cana."

In his official proclamation of the 2015-2016 Year of Mercy, Pope Francis wrote, "Mary attests that the mercy of the son of God knows no bounds and extends to everyone, without exception. Let us address her in the words of the 'Salve Regina,' ('Hail Holy Queen') a prayer ever ancient and new, so that she may never tire of turning her merciful eyes toward us, and make us worthy to contemplate the face of mercy, her son Jesus."

Parish installs Marian shrine to bring comfort to those with addictions