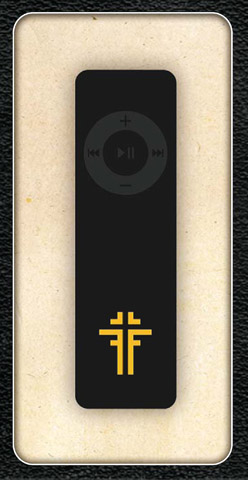 American troops have a strong presence around the globe, serving in 75 percent of the world's countries, yet "one soldier told me they are starving for spiritual support," said Cheri Lomonte, founder of Frontline Faith.

The Catholic nonprofit organization gives MP3 players loaded with the Mass, stories and prayers to active-duty members of the military.

In the two years since its founding, Frontline Faith has distributed 30,000 MP3 players. The organization started with Lomonte, a Catholic radio host from Austin, Texas, creating a Catholic MP3 player with recordings of Mass, prayers, Scripture readings and words of encouragement to members of the military.

Although the first two years of the organization brought in enough donations to cover the orders, they are left with a shortage of donation money and 1,500 requests for players they can't fill.

"Americans think the war is over because they see pictures of troops coming home," Lomonte told Catholic News Service in a telephone interview. "What people don't realize is there are still 60,000 troops in Afghanistan and there are more troops going out in December."

Lomonte came up with the MP3 idea after learning that soldiers can go months without access to a military chaplain. The aim of the player was to be a supplement to scripture readings in response to a lack of Catholic chaplains.

Last February, at the request of a Methodist pastor, a Protestant version of the MP3 player were recorded and distributed.

The players cost $24 each and are specifically for active-duty military, those preparing to deploy and those in military hospitals. The project's website lists ways to help with the project, including how to follow it on Facebook, how to connect a parish to the effort and how to donate money to support it.

Fr. Phil Mahalic, an Army chaplain with the rank of colonel, distributes the Frontline players to troops before they deploy and overseas when they attend Mass. He told CNS in a recent telephone interview that there are 326 slots for Catholic priests to serve as military chaplains, but only 89 of those are filled.

Because of an overall shortage of priests and dioceses being reluctant to release priests they need to serve in the military as chaplains, soldiers are left with infrequent visits from chaplains. Lomonte said some soldiers go months without seeing a chaplain, let alone a Catholic chaplain.

"The MP3 players are an educational tool and a spiritual motivator," Mahalic said. One new tool is a series of videos called "Faith in the Crosshairs," written and hosted by Mahalic, which can be accessed online for free.

Mahalic, a priest of the Diocese of Lafayette, Ind., said the players are an important evangelization tool. "They are one more step in the right direction, it gives them moral and spiritual support they need," he added.

Priests released by dioceses to be chaplains serve the U.S. Archdiocese for the Military Services, which provides pastoral care to Catholics in all branches of the military, their families and those at Veterans Affairs hospitals nationwide.

Deacon Paul Rodriguez, a chaplain's assistant in the Texas National Guard with the 36th Infantry Division and in ministry at St. Margaret Mary Parish in Cedar Park, Texas, received a player in Seattle as he prepared for deployment to Iraq in December 2010.

"I looked for information about it online and saw that it was part of 'Mary's Touch,' a program I had listened to," Rodriguez, who holds the rank of sergeant first class, told Catholic Spirit, the newspaper of the Diocese of Austin, Texas. "I contacted her and asked her for 50. She sent 150. They went so fast, I asked her for another 400."

He said the players were helpful, given the lack of chaplains to meet spiritual needs. "I was a division senior assistant chaplain in charge of South Iraq," he said. "There are only 20 (chaplains), which is about one per brigade."

When priests are not available, chaplain assistants such as Rodriguez pick up the slack.

"It felt good giving the soldiers something with some 'meat' on it," he said of the MP3 players. "I didn't have to improvise because I knew it came from good Catholic sources. It made my job a lot easier being able to give them that along with pamphlets and rosaries."

"It's not only the people who serve that make the sacrifice, but also the people who stay home," Lomonte said. "Think of how many people are affected by a deployment. The people at the home front need encouragement, too."

Lomonte attributes everything from the idea to the logistics and funding to the Holy Spirit. "I got a calling which I can't explain," she said, "except for the fact that I wake up every morning and I say 'Here I am. Lord, your servant, what do you want me to do?'"

[Contributing to this story was Enedelia J. Obregon, a correspondent for Catholic Spirit, newspaper of the Diocese of Austin.]