Children lead the way to stop violence, save Earth 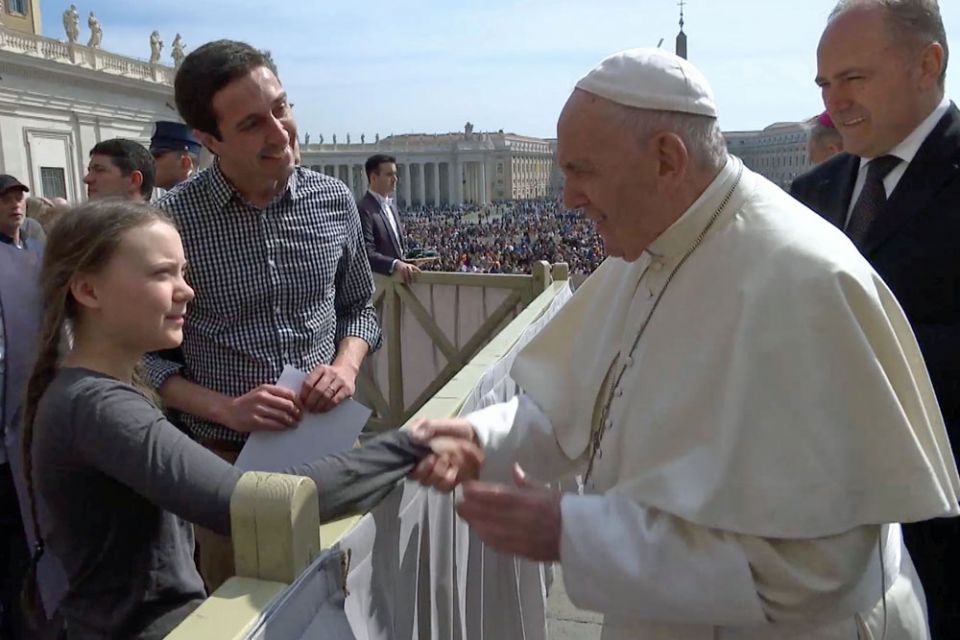 Very briefly, I remind us to continue to reflect on that message from the Book of Amos where he denounces those who continue to pile up wealth for themselves, mistreat the poor, and send them away. Through Amos, God says that ultimately they will not be successful. God will punish those who defraud the poor. In our own country just recently, another report was written and published on how the gap is growing between the rich and the poor in our country. It's not by accident, not by the fact that the rich work a lot harder. It's the way the system works — the rich get richer and the poor get poorer.

We have to begin to look at that, especially through our public policies, our tax code — all those things that make wealth flow from the poor to the rich. As God warned through Amos, we must try to bring about change. But the main thing I hope for us to reflect on today is what Jesus says in the Gospel lesson where he says, "The children of this world are more prudent in dealing with their own than are the children of light."

He's talking about his disciples and those who are not his disciples. "The children of this world," he says, "are prudent, acting on their own behalf, more than the children of light." Now this is troubling, I'm sure, to most of us. It seems that Jesus is calling attention to those who defraud others and calls them more prudent. They are, in a very worldly way, more prudent. But Jesus is trying to call our attention to the fact that we, who are truly children of light, disciples of Jesus, must try to overcome the problems in our world that are literally destroying us within our nation and our planet, our beloved Earth.

It's amazing, I think, that it really is the children of light among us who are leading the way of the two most important problems, I think, that face us. Children are leading the way. This year between Memorial Day and Labor Day, this very summer, there were 26 mass shootings in our country. In three months — 26 mass shootings. Violence seems to be overwhelming us. There were 126 people killed, including a 3-year-old girl and a 90-year-old man. Hundreds of others were wounded during these 26 mass acts of violence.

Who's leading the way and bringing change? It's the young people. Those young people who, a couple years ago, had a mass killing in their high school in Parkland, Florida, are still out there working to change our laws to prohibit the kind of assault weapons that are used in these killings. Our government leaders keep stalling, not making the changes that are necessary. Perhaps we fail to put on the pressure to make those changes.

But our young people, truly acting as children of light, are bringing about change, or certainly working to bring about change. It's time that all of us got behind their efforts. We need to stop this violence in our country. It's an absolutely atrocious kind of evil that seems to be overwhelming us. Twenty-six mass killings in the last three months and everyone knows there will be another one soon unless we change things, become supporters of those who are trying to bring about changes that will stop this violence.

But then there's another way in which young people are truly acting as children of light. This past Friday, a couple of days ago, there were demonstrations on every continent. Millions of young people, again, were involved demanding that we make international treaties to stop what's happening to our planet. We're destroying this world that Jesus taught us to love. Do you remember how he spoke so fervently about the flowers of the field and the birds of the air? God takes care of them, Jesus says, because God loves them. We destroy them.

In the past 50 years, over 26 billion species of birds have been destroyed. That means lots of dramatic and disastrous changes in our planet because our ecological system is all connected. When we destroy one part, it affects other parts. If we don't stop within 15, 20 years, our planet will not be able to support human life. As the youngsters throughout the world this past Friday went on strike, they were demanding that we make the changes.

There is a climate treaty. Our country pulled out of it; we're not supporting it any longer. The young people are saying, "This is wrong." The leader of the group — and she is an amazing young person, 16 years old, Greta Thunberg from Sweden — for the last two, three years has become very famous because she is speaking out. This week, a 16-year-old youngster will be speaking again to the United Nations urging all the nations to make the changes that will save our planet.

Pope Francis has written a beautiful encyclical letter, "Laudato Si'," "praise God for this earth." It's built on a canticle of St. Francis of Assisi. We need to become serious, become children of light, follow the leadership of our own children throughout the world — all of those who took the time off on Friday to make public protests on every continent. We need to listen; we need to follow that lead. Jesus urges us to love the world that God has given to us, just as God loves this world and provides for the birds of the air and the animals on the planet.

Jesus, it seems, was kind of amazed that the children of this world are more prudent than the children of light. He wasn't praising them; he was asking us to be prudent in regard to our very planet, to save it. It's time that we listen to the young people, prophets in our midst who are listening to Jesus and following him. Perhaps if we do, we can end the violence and save our planet. It's not just a political issue; it's a religious issue. God, through Jesus, rejected violence of every kind and insists on love. God, through Jesus, showed love for the planet. We must follow God's way.

Editor's note: This homily was given Sept. 22 at St. Ambrose Church, Grosse Pointe Park, Michigan. The transcripts of Bishop Thomas Gumbleton's homilies are posted weekly to NCRonline.org. Sign up here to receive an email alert when the latest homily is posted.

Column | Children lead the way to stop violence, save Earth

Five things to look for in the encyclical on environment