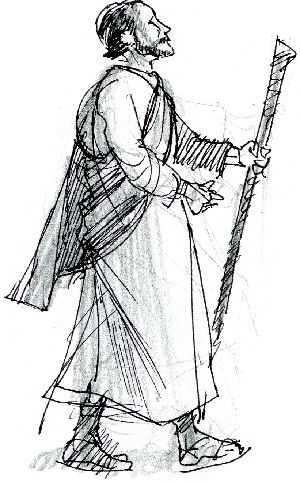 The author of the Book of Daniel offers us creatures more fantastic that any of the superheroes in Marvel Comics. They are more than entertainment but serve as a kind of coded history of successive empires and figures reaching back to the Neo Babylonian era of the exile up through the conquest by Alexander the Great and his Greek-Syrian officers, culminating in the tyrant Antiochus Epiphanes, defeated during the Maccabean wars. Today’s selection ends with the figure described as one like a “son of man,” who is presented to the Ancient One on the throne and given everlasting dominion.

This style of writing is found in the Book of Revelation depicting the Roman empire.  In the Gospels, Jesus refers to himself obliquely as the son of man, interpreted as “human being,” and Mark (14:63) has Jesus before the Sanhedrin and Luke has Stephen in Acts before he is stoned, both describing the “coming of the son of man on the clouds.”  The divine allusions are regarded as blasphemous and deserving of death.

Interpreting these passages has become the career of many scripture scholars, but they reveal for us just how interwoven the Bible is with patterns that repeat and fulfill one another. For Christians, the whole Bible is somehow about God creating and saving the world through his Word, which becomes flesh in the person of Jesus Christ. To know the Scriptures is to meet him and to share his life, death and resurrection as the key to a meaningful life here on earth and with God in eternity.

Finding meaning and continuity in our own lives often comes down to words of reassurance we carry with us from mentors, things we have read, poems we have memorized, images and even songs we hold dear that comfort and challenge us at each stage of our journey.  As time passes, we must deepen our convictions about what is true and trustworthy. We learn from our experiences, both good and bad, just what is real and what is not, what is reliable and what is illusion.  In crisis we discover what endures and what fails the test.

Jesus sought to reassure his disciples that whatever happened, no matter how much their personal worlds were shaken by chaos and loss, he would never fail them.  Even if heaven and earth passed away, his words would never pass away. God keeps promises. Love is stronger than death.  Nothing can separate us from the love of God.  The end of story has already appeared in the middle, so we need not be afraid.  This confidence guides us into the season of Advent, a fresh start and renewed expectation and hope.

In J.D. Salinger’s book, Franny and Zooey, an older brother tells his sister to cure a chest cold by copying a verse from a favorite poem on a piece of paper, fold it and place it in her pocket. It is poor doctoring but holds some truth that words are powerful. We entertain this power each time we take a passage from the readings and make it our Word for the day, a mantra we address to each problem we encounter or each lesson we learn.  To make the Word our companion is to restore harmony and hope to whatever we experience.  This is discipleship, the blessed assurance that will never fail us.

A good coach makes all the difference

Ikea insight for Catholics: When home doesn't feel like home