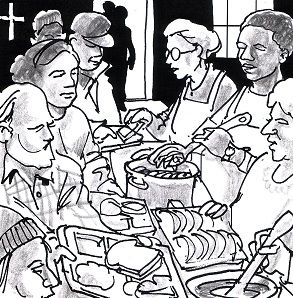 The little table was red, had two wings that folded out to hold the pans of sliced bread the guests took as they passed along the long, metal serving table at the Catholic Worker House.  After dinner had fed around 200 guests, the table, which had three good wheels and one that wobbled, was taken into the side dining room to become the altar for Mass. Servers and guests would gather around it with the visiting priest to celebrate Eucharist.

It seemed a perfect way to understand both the meal and the Mass. A table became an altar to hold not just the bread and wine but all the questions that brought so many hungry and often homeless people together to find what Dorothy Day called the “human warmth of community.”  Why such basic needs in the richest country in the world? Why were so many people falling though the gaps in social systems and an economy that reflected enormous inequalities, lack of access to healthcare, education, alongside such disproportionate spending on the military, including nuclear weapons?

The questions became visible in the suffering represented by the guests, and the weight of the issues, like the sins of the world, piling pile up endlessly on the small altar where God would become present as food for the hungry and mercy for sinners.  Here was a sign of hope that a world based on the Corporal Works of Mercy would prevail if hearts were changed by the power of love.

Even this small altar had its foundation in the long history of God’s covenant with humanity. All the biblical themes, prophecies and promises going back to Abraham, the father of the three great religions of the book, the altars of sacrifice, blood symbolically uniting divine and human, the Passover meal that nourished the journey with Moses from slavery to freedom, they all converged here. Passover became the Table of the Lord for Christians, where Eucharist recalled the death and resurrection of Jesus and renewed the timeless promises being celebrated on this little, red table, now an altar.

Today’s solemnity of the Body and Blood of Christ invites us to reflect on the life we receive by being united, body and blood, with the crucified and risen Jesus. St. Paul understood that the Eucharist united him so intimately to the love of Christ that he was crucified to the world and its struggle for justice and love. In a fractious and ideologically divided church, the one place we must meet is the family table of the Eucharist to commemorate the death of the Lord, who laid down his life to reconcile sinners.  Communion makes us companions— those who break bread together—even in the midst of our differences.  If we do not meet here, the center will not hold, and the church will cease to be the sign of unity the world so desperately needs.

The fast we need

'Humanity for All: A Pastoral Letter on Men' (draft)

We have to give ourselves for one another