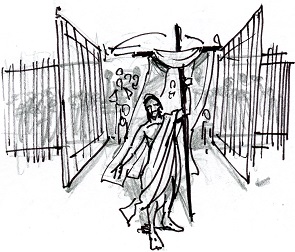 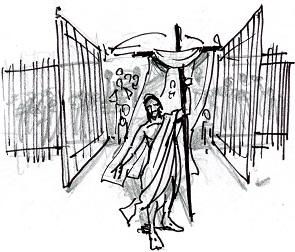 When Jesus speaks of John the Baptist, he compares him to the legendary Elijah, greatest of the early prophets (1-2 Kgs). His departure from the earth in a fiery chariot fueled the common belief that he would return before the Day of the Lord. Popular expectation in the time of Jesus was that Elijah would precede the arrival of the Messiah. By identifying John as Elijah, Jesus confirms the coming of the Kingdom of God.

Jesus says that John is the greatest human being who ever lived, yet he is of the Old Order and the First Covenant of the Law and the Prophets.  The least disciple of the Kingdom, the Order of Grace, is greater than John.  Our glimpse of John in the Gospels is of an intense and radical figure coming out of the Judean wilderness, wild in appearance and fierce in speech and manner. He has no fear of offending Herod, the high priests and scribes or even Pilate.  His baptism in the Jordan was seen as a provocation to the Romans for its comparison to the liberation of the Hebrews from Egypt. John’s images for judgment as an axe laid to the root of the tree or a winnowing fan on the threshing floor are ominous and violent.

Jesus confirms John’s warnings about the need to repent when he says that “from the days of John the Baptist until now, the Kingdom of heaven suffers violence, and the violent are taking it by force.”  These enigmatic words have been interpreted in many ways, but in context they most likely refer to the urgency and intensity of both John and Jesus’ message of repentance in order to seize the invitation to enter the Kingdom.  While John seems all about judgment, Jesus preaches mercy. Jesus offered entry to both sinners and the righteous as God’s pure gift, but he still emphasized that this gift had to be accepted. People would judge themselves if they did not respond.

Another version of the same phrase, “the violent bear it away,” was the title of one of Flannery O’Connor’s novels about characters exhibiting the same radical intensity John the Baptist represented.  Many of her stories shocked readers because of their violence: final conversion coming to a self-righteous woman gored by a bull, a child seeking baptism who walks into a river and drowns, a proud and prejudiced woman who has a vision of the procession into heaven in which her social group enters last behind everyone she has despised and looked down on.

O’Connor’s real target and nemesis was not direct evil but the banality and indifference of contemporary culture, self-satisfied religion, the smug secular dismissal of God and moral accountability.  She said she wrote her grotesque, gothic tales in the same way an artist would draw large dark lines on poster board for the almost blind. Conversion can only come for some in crisis and violent disruption, yet better this than failing to enter the reign of God, the only thing really necessary.

Today’s Gospel imagery may seem odd for Advent, but it reminds us to break the spells of indifference and cultural sleep that cloud our sense of urgency about preparing for Christmas. Are we ready to meet and embrace God in the flesh, in the divine-human gift of Jesus, the incarnate Word, who waits to be welcomed into our lives? Will we be too preoccupied, anxious and distracted to hear his request to dwell intimately with us in every detail of our lives?  Salvation, the promise of life with God, will knock but not enter without our consent.  What will it take in the two weeks remaining to rouse ourselves with urgency and passion to be ready to open our hearts to his coming?