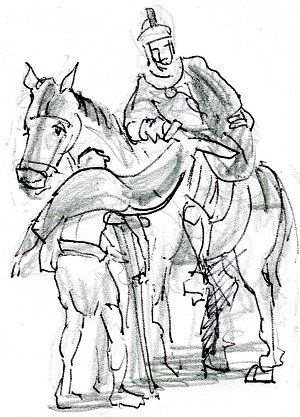 It may be a coincidence that on day we commemorate veterans, the universal church is celebrating the feast of St. Martin of Tours. He was a soldier in the Roman army who decided his baptism was at odds with waging war.  He was part of ageneration of converts to Christianity in the 4th century whose pacifism opened the Roman Empire to nomadic peoples crossing its borders and changing the face of an emerging Europe.

Veteran’s Day honors the military by remembering the terrible costs of war. In the major wars of the Twentieth Century and the countless other wars that have marked each era of human history, millions of lives, both soldiers and civilians, have been sacrificed to conflicts over territory, resources, power and pride.

Veterans are the frontline sentries to the questions of war and its effects. They carry the visible and invisible wounds of combat. Many are eloquent in their belief that armed vigilance prevents conflict, and others are eloquent in opposing war as a way to settle conflicts.

Making peace is hard work and the most difficult prayer to advance in faith because it seems impossible. Jesus told his Apostles that if they had faith the size of a mustard seed, they could order a mulberry tree to uproot itself and be planted in the sea. He chose the impossible to describe the power of prayer by God’s children.

Blessed are the peacemakers, those who stand up, speak out, cross the line, pay fines, serve time and even lose their lives to oppose violence and promote peaceful solutions to conflict.

St. Martin of Tours is also remembered for his care of the poor by dividing his military cloak with his sword to share it with a victim of the cold. Perhaps he understood that war creates victims by taking the resources a nation might have devoted to building up society in order to build weapons of destruction. The home front is the first and last casualty of every war. Veterns Day gives us sober pause to remember and reflect on the choices we make to keep our world safe for everyone.

During journeys of peril, the 'everlasting arms' are God's alone