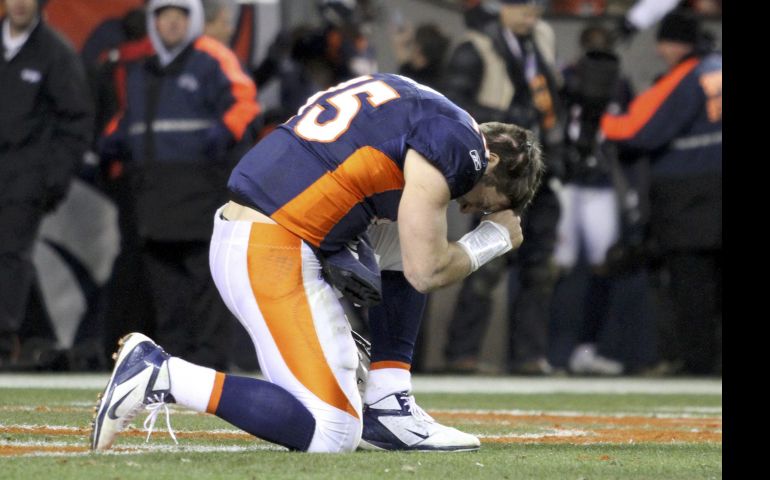 Denver Broncos quarterback Tim Tebow prays after the Broncos defeated the Pittsburgh Steelers in overtime in the National Football League AFC wild-card playoff game in Denver Jan. 8. (CNS/Reuters/Marc Piscotty)
Tim Tebow can wear all the Bible verses he wants on his eye black: Most Americans don't mind professional athletes expressing their faith on and off the field, according to a new study.
A poll conducted by Grey Matter Research and Consulting shows that 49 percent of Americans see athletes' public expressions of faith favorably; 32 percent don't care, and 19 percent take a more negative view.
More than 1,000 American adults were polled about public displays of religion among professional athletes. Participants were asked about specific religious actions commonly displayed by religious athletes, including prayer after games, speaking about faith in interviews and making religious signs, such as crossing oneself or pointing heavenward, on the field.
"As a Christian, it's very encouraging because I believe we recognize the influence that Christian athletes can have," especially in such a sports-minded country, said Josh Canales, the Los Angeles County director for Fellowship of Christian Athletes. In college, Canales played baseball at University of Florida and University of California, Los Angeles, then went on to play three seasons for the Los Angeles Dodgers.
Americans are most supportive of opposing teams praying together after games, with 55 percent of all Americans viewing it positively.
Americans' least favorite expression of religion is when "athletes suggest that God helped them or their team accomplish something," according to the study. Responses to statements such as "God really gave me strength out there" or "I kept believing and God let me hit that home run," are viewed negatively by 26 percent of respondents.
In general, those who are not avid sports fans tend to be more ambivalent about players' religious expressions than self-identified sports fans, who are more likely to support athletes' expressions of religion.
While regular churchgoers are more likely to support religious expression, between 30 and 41 percent of that same group had either negative or neutral feelings toward open religious expression on the field or on the court, depending on the action.
"Positive feelings toward these expressions of religious belief are a bit more muted than one might expect among religious Americans," Ron Sellers, president of Grey Matter Research, stated in the study.

Justice, canon law, restoration: How do sisters heal after transgressions?