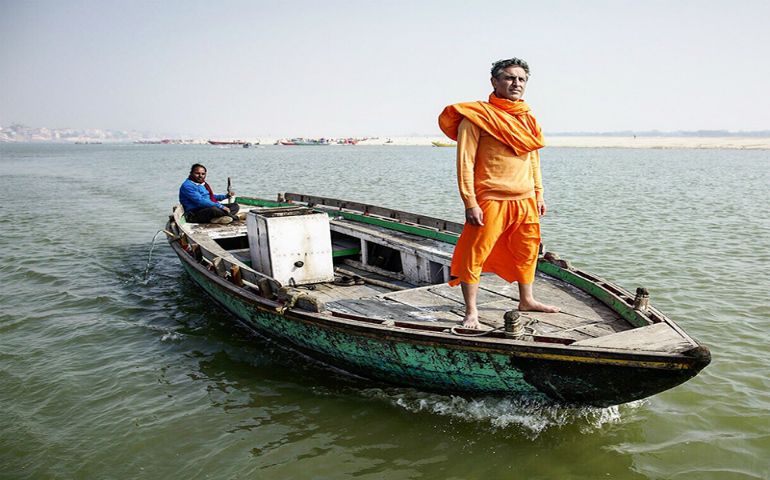 Reza Aslan in India, for the CNN show “Believer.” (CNN)

Maybe it was the moment the nearly naked, ash-smeared guru asked Reza Aslan, the religion scholar and best-selling author, to eat a piece of human brain.

Or maybe it was when the same guru, camped on the banks of the Ganges River at the crematory city of Varanasi, India, smeared human ashes on Aslan's face and hair.

Or maybe it was when the guru, taking a break from drinking alcohol from a hollowed out human skull, began dancing around the fire, drinking his own urine.

Whatever it was, Aslan, the host of CNN's new six-part series "Believer," knew he wanted to get the bleep outta there.

"I was there to get know and learn from him and to him it was, 'you are now mine,'" Aslan said in between television appearances to promote the show, which premieres this Sunday, March 5. "It was, 'You belong to me,' and I just thought, oh no, I am in way over my head."'

But Aslan escaped with his head intact — despite the guru's ultimate threat to cut it off. What changed was Aslan's perspective on the Aghoris, a Hindu sect that believes, contrary to the Hindu caste system, that no one is pollutable or impure because God dwells in all.

And that is the point of "Believer" — to use Aslan's hip-deep immersion in some obscure corner of the faith world to show that people of different religious persuasions — even the ones generally considered marginal, dangerous or just plain "out there" — have more in common than they know.

"My focus has often been on the lived experience of religion, yes," Aslan said. "So I did not want to do a show where I traveled around the world and pointed to a community and said, 'My, don’t they look interesting.' I wanted to focus on the things that people believe, why they believe them and show what those beliefs have in common with what, you, the viewer, believe."

So after Aslan flees the guru — the most extreme example of Aghorism — he winds up at an Aghori orphanage and school, where children, regardless of the their caste, are treated as equals in the eyes of God, and an Aghori nursing home where those with leprosy — considered the most polluted persons by many in India — are treated with compassion and dignity.

And that's the general template of all the episodes provided for preview. In each one, Aslan encounters a faith group that appears completely whacky. But instead of recoiling in shock or disgust, he digs deeper, asks more questions, stays longer until finally, he uncovers what he describes as some underlying, universal truth.

In an episode about a doomsday group in Hawaii, Aslan watches as the leader, a wild-haired man who goes by the name of "JeZus," prances and wails and declares himself God. But when he talks to JeZus and his followers about what they believe, he uncovers an environmentalism that would be recognized by many Christians as "creation care."

And when he travels to Haiti to investigate the tug-of-war between the island's native practitioners of voodoo and the evangelical Christian missionaries, he finds himself in the middle of thousands of Haitians chanting "Fall down, devil" as people possessed by "lwa" — spirits — writhe and jerk among them. But a trip to a voodoo temple reveals the faith is focused on one God who has intermediaries — just like Catholic saints.

Other episodes take Aslan to explore ultra-Orthodox Judaism in Israel, Santa Muerte in Mexico and Scientology in the U.S. For each segment, he and his crew spent seven to 10 days with each group.

The series reflects the fact that Aslan is himself a bit of a spiritual tourist. Of Iranian descent, he converted to Christianity as a teenager, then converted back to Islam before college. He attended a Catholic university and then went on to Harvard Divinity School. His books have ranged from an argument for liberal interpretation of Islam ("No God But God"), the nature of religious violence ("Beyond Fundamentalism") and a biography of Jesus ("Zealot"). His wife, the entrepreneur Jessica Jackley, is a Christian.

"There were a lot of new experiences I absorbed intellectually," he said of filming the series. "But the things I took away from it were all emotional, all spiritual. I think about the spirituality I experienced in the Aghori leprosy community... and at the Santa Muerte mass on Dia de los Muertos, where I was standing shoulder-to-shoulder with people I would cross the street to avoid, and yet I had a deep spiritual connection with them. It is those feeling that have stayed with me and really only strengthened my faith."

Spirituality | Reza Aslan tries to make a 'Believer' out of everyone

Sin is scary, but God is always ready to forgive, pope says