The Solemnity of the Most Holy Body and Blood of Christ: Give all you are 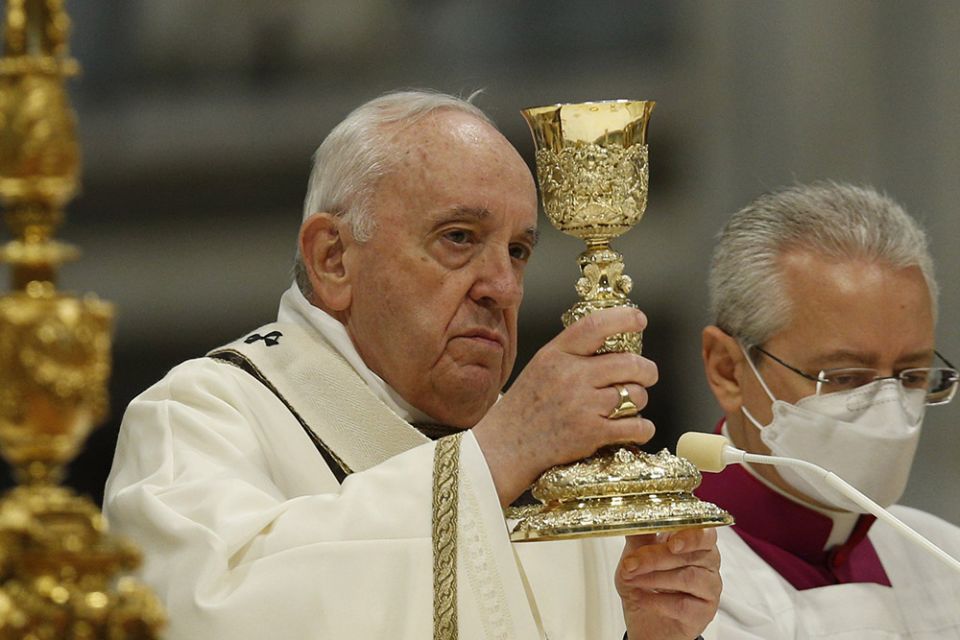 The Latin Mass, girl acolytes, women preaching, which politicians should be barred from receiving the Eucharist? What's the matter here? How has our central act of worship become the center of such contention, at least among Catholics in the United States?

Paul would understand it perfectly — in fact, contention about celebrating the Eucharist is a major theme in his first letter to the Corinthians. In Paul's day, the problem was not about language or partisan politics. It wasn't even really about gender.

Some of Paul's community had adopted gnostic ideas and assumed that believing correctly was essential, while one's behavior, perhaps especially in sexual mores, was irrelevant to their Christian identity: Because one's spirit was destined for eternity, what they did with the body didn't count.

In 1 Corinthians 11, Paul goes after this community with such passion that his rhetoric comes out somewhat contradictory. Paul fell all over himself talking about hairstyles, veils, clothing, and woman coming from man, and man born of woman and so on. But none of these issues focused on the key problem.

In 1 Corinthians 11:17-22, the section immediately preceding today's selection, Paul vehemently censured the community, declaring that their discriminatory practices were a sacrilege. In Paul's time, the community celebrated the Eucharist as a communal meal. Paul observed that the wealthy could arrive before their servants and eat and drink as much as they wanted, leaving paltry leftovers for their "inferiors."

Because their inequitable practices contradicted the essence of the communion they were supposedly celebrating, Paul unleashed on them one of the strongest condemnations in the New Testament. He told them that their worship did them more harm than good and finished with the accusation: "One who eats the bread or drinks the cup unworthily is answerable for the body and blood of the Lord."

In other words, by their lack of real communion, rather than celebrating communion with Christ, they were repeating his crucifixion.

The centerpiece of Paul's argument comes in today's selection, Paul's explanation of the meaning of Eucharist and the oldest eucharistic account in the New Testament.

When Paul describes the eucharistic meal, he emphasizes key elements: It happened on the night Jesus was betrayed; Jesus took the bread, gave thanks, broke it and identified himself with the broken bread. He then did the same with the wine.

With both the bread and the wine, he commanded the disciples to do what he did in remembrance of him. Only Luke and Paul cite Jesus' command to do this in Jesus' memory, and Paul says it twice.

In the Jewish tradition, remembering was an emotional and spiritual experience more than an intellectual activity. This kind of remembering includes the entire sweep of time, allowing the past to touch the present in such a way that the past gives direction and meaning to the future. Each time we remember Jesus in the breaking of the bread we receive his self-giving and pledge to reproduce it in our day — doing it in memory of him.

To remember Jesus in the breaking of the bread involves a promise St. Augustine described as an act of receiving what we are so that we can be what we receive, the body of Christ.

In Pope Francis' words, "Taking part in the Eucharist means entering into the logic of Jesus, the logic of giving freely."

This is why Paul's teaching that the community itself is the body of Christ immediately follows his commentary about the Eucharist.

Today's Gospel, the only story retold six times in the Gospels, makes the same point. Although we call it the "multiplication" of the loaves (and fish?), no version of the story says that the quantity of bread increased. Each rendition does say that the disciples claimed they did not have enough to respond to people's needs, that Jesus asked them only to give everything they had, and that when they did so, there was more than enough.

These stories foreshadow the Last Supper as they repeat the formula that Jesus took, blessed and broke the bread to satisfy the needs of the people. He taught the disciples how to give all they were, just as he did through his life and death. That was, and only that could be, enough.

It is little surprise that we, like the Corinthians, have disagreements about the Eucharist. As the most important sacrament we celebrate, our understanding of it tells us who we are to be.

Paul told the Corinthians that remembrance (in the full Jewish sense) was the key. The lesson remains valid for us today. Jesus used bread and wine to symbolize how he consecrated his entire life for us. He invites us into communion with him in that consecration. Nothing else matters.

A version of this story appeared in the June 10-23, 2022 print issue under the headline: Give all you are .

Column | The Solemnity of the Most Holy Body and Blood of Christ: Give all you are

God is in our midst and is working through us