by Zoe Ryan
This article appears in the Immigration and the Church feature series. View the full series. 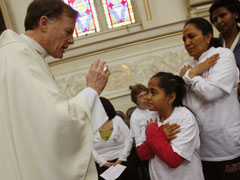 Not able to get much traction on immigration reform at the federal level, activists have shifted their focus to stopping bills in their state legislatures in order to draw attention to the need for federal reform. Catholic bishops followed the trend in their home states and sent their lobbyists, known as state Catholic conferences, into capitols to influence the hundreds of bills before their legislatures.

In 2010 alone, “more than 1,400 bills were introduced, 208 laws were enacted, 10 were vetoed, and 138 resolutions were adopted” regarding immigration-related state laws, according to the National Conference of State Legislatures Web site.

Utah and Florida, for example, ended their legislative sessions in March and May, respectively, with Utah passing four immigration bills and Florida leaving behind two.

The government relations office in the Salt Lake City diocese and the Florida Catholic Conference fought against the proposed legislations in their respective states and argued that reform needs to be at the federal level, a reflection of the views the U.S. bishops’ conference has put forth since its 2003 pastoral letter, “Strangers No Longer: Together on the Journey of Hope.”

The church in the U.S. has been engaged in immigration issues since the mid-19th century and “in the past decade, [immigration has] been very big,” said Todd Scribner, education outreach coordinator for Migration and Refugee Services at the U.S. bishops’ conference.

The bishops are very aggressive in pursuing comprehensive and just reform, he said, and from his experience in the field, it’s an issue with increasing importance.

The U.S. bishops’ conference addresses federal legislation. For the past six years, the bishops’ Justice for Immigrants campaign “has been leading the charge,” Scribner said, encouraging Catholics to learn about immigration. Recently, the campaign printed close to a million postcards that parishioners across the country sent to their representatives in Congress, asking for compassionate immigration reform.

Last year after Arizona passed its controversial immigration enforcement bill SB1070, which the U.S. bishops called “draconian,” other states introduced variations of their own.

Sensing Utah legislators may tackle immigration reform before the federal government, Salt Lake City Bishop John Wester, former chair of the bishops’ conference committee on migration, worked with Utah businesses, law enforcement, political leaders and other faith leaders to draft the Utah Compact, a list of principles that would guide legislation. The five principles are:

The compact inspired groups in other states such as Maine, Indiana and Georgia to draft similar principles. Maine’s proposed enforcement bill was withdrawn before a vote.

However, Indiana’s governor just signed a bill that requires, among other provisions, that certain employers use E-Verify, a database to check employment eligibility, and Georgia’s governor recently passed a law similar to Arizona’s SB1070 and that also contains requirements for certain businesses to use E-Verify.

A Louisiana legislator withdrew his enforcement proposal May 25 after hearing from law enforcement, immigration advocates and the Louisiana Catholic Conference, which was successful in having the provision to criminalize the transportation of illegal immigrants taken off the bill, according to Louisiana news reports. Even though that aspect was removed, the conference still opposed the bill because the conference calls for federal, not state, reform.

Some have praised Utah for its more moderate approach to immigration when compared to Arizona: One Utah bill allows law enforcement to check arrestee’s status and another allows for a guest worker program.

Although some have said Utah could be a model for immigration reform, to have other states copy Utah’s laws makes the process even worse, said Jean Hill, director of government and community relations for the Salt Lake City diocese.

“What we need is for the federal government to take the concepts that we all support and put those into federal legislation, which is the only place that this can happen,” she said.

Sheila Hopkins, associate director for social concerns/respect life for the Florida Catholic Conference, agrees that reform needs to be at the federal level. “This is really a bad way to go about it, because technically it’s not in the purview of the states, but I think there’s a growing frustration and this is how people are choosing to direct their efforts.”

Wester said he believed that Utah legislators did aim for a toned-down legislation and while he is grateful and respects the efforts, he has to be true to his principles and the church’s, namely putting people first.

Utah’s first bill of the four went into effect May 10 and less than 24 hours later a judge blocked it, with the next hearing set for July. The bill allows law enforcement to check the citizenship status of anyone arrested. The other bills go in effect in 2013.

Most of the feedback the Salt Lake City diocese gets from Catholics on immigration reform is supportive, although it’s difficult to tell, Wester said. The ones who are unsupportive might not be as vocal as the ones who are supportive, he said.

He speaks at immigration workshops for Catholics, and the workshops are helpful to keep important questions in people’s minds and to give updates, Wester said, but he added that he’s “preaching to the choir.” Most attendees are more inclined to agree with what he’s saying than not, he said.

Christians have a responsibility to “open our arms to the stranger in our midst,” Wester said.

“Does that mean we are going to take in every single immigrant in the world? No, of course not. ... but it does mean that we’re going to do what we can to be hospitable and to welcome people.”