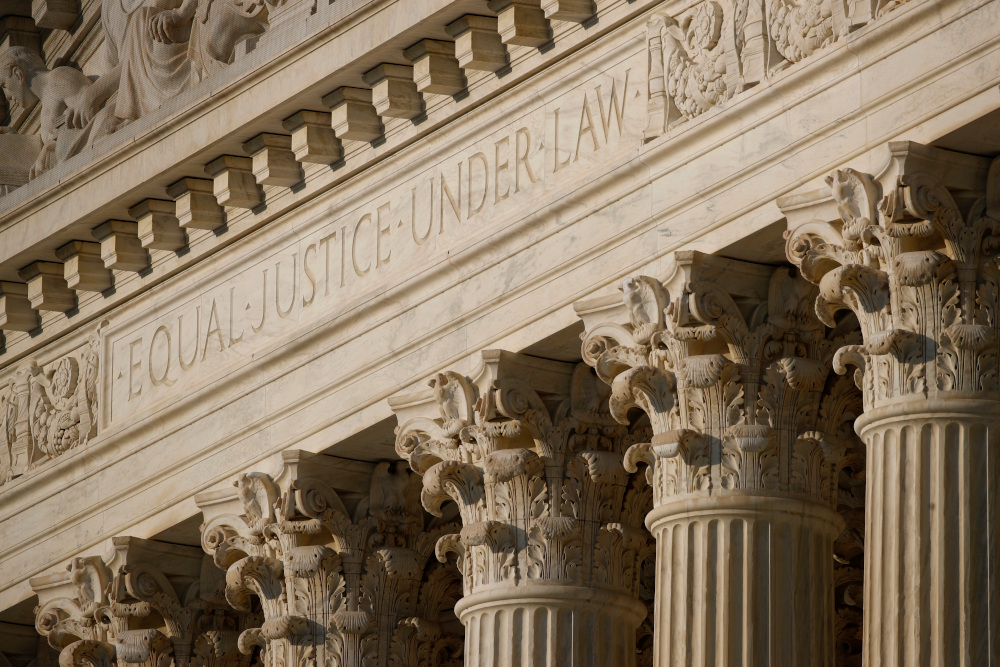 In this May 3, 2020 photo, the setting sun shines on the Supreme Court building on Capitol Hill in Washington. On Monday, May 11, 2020, the Supreme Court will hear arguments in a disability discrimination lawsuit she filed against her former employer, St. James Catholic School in Torrance, California. A judge initially sided with the school and halted the lawsuit, but an appeals court disagreed and said it could go forward. (AP/Patrick Semansky)

A case about the appropriate separation between church and state is taking center stage at the Supreme Court, which is hearing arguments by telephone for a second week because of the coronavirus pandemic.

The case involving two ex-Catholic school teachers and their former employers is one of two the court is tackling May 11. The three days of arguments last week might be considered something of a warm-up, a test of how telephone arguments would work and of making audio of arguments live for the first time.

The stakes are higher later this week when the cases include high-profile fights over President Donald Trump's financial records and whether presidential electors have to cast their Electoral College ballots for the candidate who wins the popular vote in their state. Those cases will be heard May 12 and May 13.

On May 11, the court is hearing a case involving Kristen Biel and Agnes Morrissey-Berru, both former fifth grade teachers at Catholic schools in California. Biel taught at St. James Catholic School in Torrance and Morrissey-Berru at Our Lady of Guadalupe in nearby Hermosa Beach. Morrissey-Berru's teaching contract wasn't renewed in 2015, when she was in her 60s, after she'd taught more than 15 years at the school. And Biel's contract wasn't renewed after she disclosed she had breast cancer and would need time off.

Both sued their former employers, with Morrissey-Berru alleging age discrimination and Biel alleging disability discrimination. A lower court said both lawsuits could go forward, but the schools have appealed and have the support of the Trump administration.

The question for the justices is whether the schools are exempt from being sued as a result of a unanimous 2012 Supreme Court decision that said the Constitution prevents ministers from suing their churches for employment discrimination.

The so-called ministerial exception "ensures that control over religious functions lies with the church, not the state, to the great benefit of both," the schools have told the court. The schools argue that both women count as ministers, in part because they taught religion among other subjects. Lawyers for Morrissey-Berru and Biel disagree.

Biel died last year at age 54 after a five-year battle with breast cancer. Her husband has pursued the case in her place.

The other case the justices are hearing arguments on May 11 is about whether a large swath of eastern Oklahoma, including most of Tulsa, remains Indian land that belongs to the Muscogee (Creek) Nation. The issue is whether tribal members can be prosecuted in state court for crimes committed on Indian land, and has been heard before the court before.

Eight justices apparently were evenly divided after the first round of arguments involving a Native American man who was convicted of murder. Justice Neil Gorsuch took no part in that case, because he participated in it at an earlier stage when he was a judge on the federal appeals court in Denver. But he will participate in the May 11 arguments involving a convicted child molester, who also is a member of the Creek Nation.