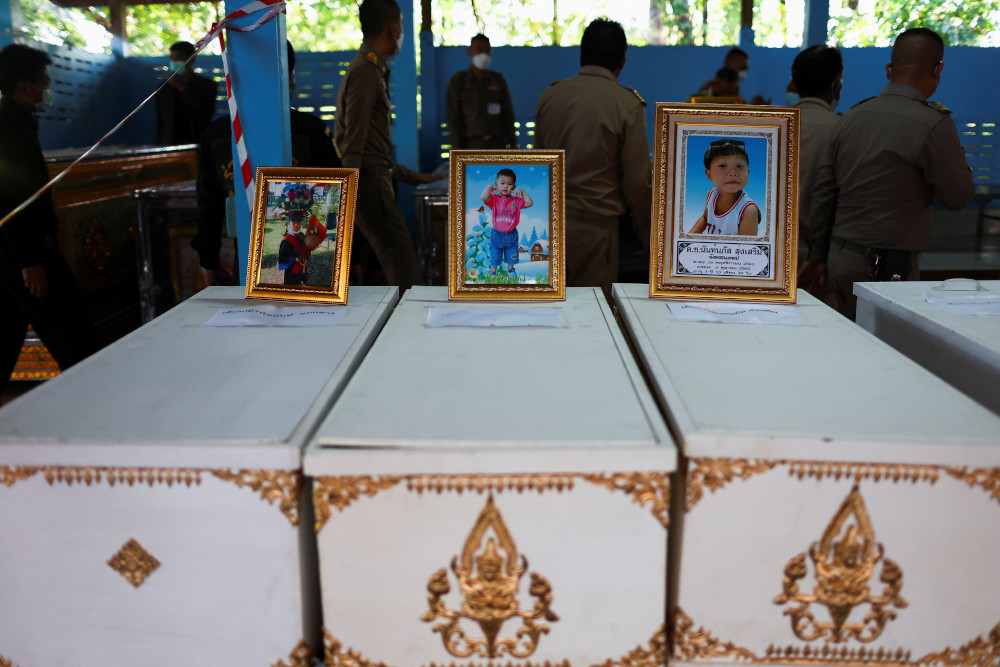 Pictures of victims stand on top of their caskets at Sri Uthai temple in Na Klang, Thailand, Oct. 7, 2022, following a mass shooting in Uthai Sawan. A former police officer facing a drug charge burst into the day care center Oct. 6, killing more than 30 people, including preschoolers, in the deadliest rampage in the nation's history. (CNS photo/Athit Perawongmetha, Reuters)

Pope Francis said he was "deeply saddened" after hearing the news of one of the world's worst mass shootings at a day care center in northeast Thailand.

In a message sent Oct. 7 by Cardinal Pietro Parolin, Vatican secretary of state, the pope offered prayers for the victims "of the horrific attack" that claimed the lives of 36 people, including at least 24 children, Oct. 6.

The pope "offers his heartfelt condolences and the assurance of his spiritual closeness to all those affected by this act of unspeakable violence against innocent children," the cardinal wrote.

According to an AP report Oct. 7, Panya Kamrap, a former policeman, went to the day care, where his child was enrolled but had been absent for the past month, before going on a shooting and stabbing rampage. He then went home where he shot and killed his wife and child before turning the gun on himself.

Authorities said Kamrap was dismissed from the police force earlier this year after a drug charge against him and that he was scheduled to appear in court Oct. 7 to face that charge, Reuters reported.

Parolin said the pope prayed that God may grant "divine healing and consolation" to the grieving families and the injured.

Francis "prays that, in this hour of immense sadness, they may draw support and strength from the solidarity of their neighbors and fellow citizens," Parolin wrote. "Upon all the beloved Thai people, the Holy Father invokes the blessings of peace and perseverance in every good."