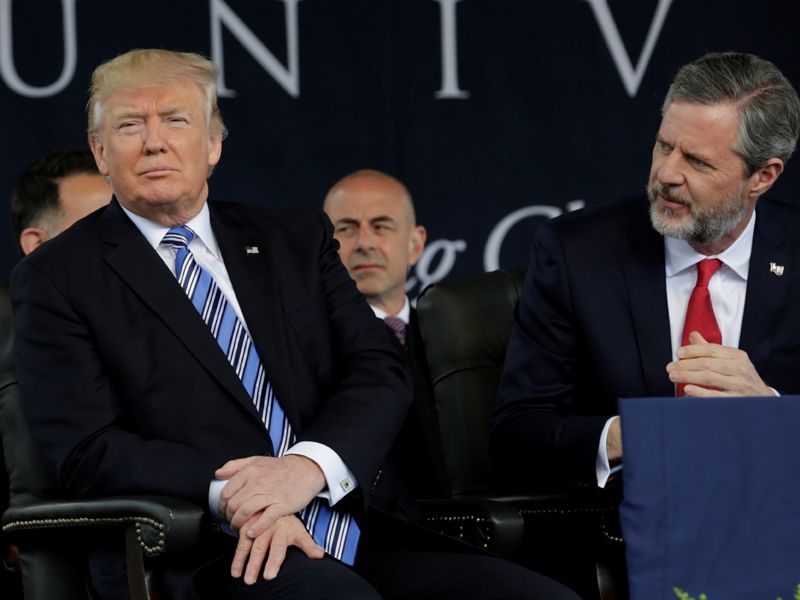 President Trump, left, sits before delivering the keynote address at Liberty University’s commencement in Lynchburg, Va., on May 13, 2017. Seated on the right is Jerry Falwell Jr., then president of Liberty University. (Yuri Gripas/Reuters)

A group of progressive evangelicals and other Christians are planning a "revival" this spring to protest "toxic evangelicalism" and evangelical leaders such as Jerry Falwell Jr. who support President Trump.

Christian author and activist Shane Claiborne announced the event on Twitter Wednesday (Feb. 7), saying he and others plan to host a "Red Letter Revival" on April 6-7 in Lynchburg, Va. — the same city where Liberty University, a conservative Christian school led by Falwell, is located.

Claiborne, co-director of the progressive Christian group Red Letter Christians, told Religion News Service he's heard Liberty students say they want their school "to be known for its love for Jesus (rather) than its love for Trump."

Specifics for the event remain tentative, but he said the program would begin that Friday with a "three-hour hype-filled, fiery, beautiful worship (service with) preaching." The next day would include "a whole bunch of different breakout sessions and music" and conclude with "another big service" Saturday evening — including a "call to action."

A separate statement emailed to RNS by a Red Letter Christians official did not mention Falwell or Trump by name but highlighted the target audience for the event.

"In word, worship and witness, this 'revival of Jesus and Justice' will stand in stark contrast to the distorted Christian nationalism that many white evangelical leaders have become known for," the statement reads in part. "It is a gathering for people of faith or no faith who are curious about Jesus and troubled by the state of evangelicalism in America."

It was not immediately clear what the "call to action" Claiborne mentioned would be, but the announcement comes as tensions continue to escalate between Falwell and more progressive Christians deeply critical of his steadfast support for Trump.

In an action Liberty officials defended as an attempt to maintain "safety and security," evangelical speaker Jonathan Martin was removed from the campus when he visited to attend a concert in October shortly after calling for a peaceful protest of the school. Days later, Claiborne and others published an open letter in November challenging Falwell to a religious debate and accusing him of contributing to a conflation of the "Lord's gospel" and "the religion of white supremacy."

Falwell, for his part, has ardently defended Trump since 2016, calling him a "dream president" for evangelicals. More than 80 percent of white evangelicals voted for Trump, and many consider him a champion of their values, including their opposition to abortion. In 2017, when the president was embroiled in controversy for saying that blame for the deadly violence in Charlottesville, Va., fell on "both sides" — meaning white supremacists and counterprotesters — Falwell declared that "President Donald Trump does not have a racist bone in his body." In January, when allegations surfaced that Trump had an extramarital affair in 2006 with a porn star and paid her to keep quiet, Falwell told CNN "we are all equally bad, we are all sinners."

He has also drawn a distinction between what he believes is a Christian's personal responsibility and the responsibility of government, tweeting last month that "Jesus said love our neighbors as ourselves but never told Caesar how to run Rome."

Claiborne did not offer any official statement about whether attendees will directly confront Liberty officials during the revival, but the outspoken author is no stranger to dramatic demonstrations. For instance, he was arrested in December for participating in a prayer-based protest in Washington, D.C., to express support for legislation that would protect immigrants who were brought to the United States by their parents when they were children.

Other faith leaders critical of Falwell are also scheduled to be part of the revival. Claiborne said the festivities will include an address by the Rev. William Barber II, a leading figure in the religious left and organizer of the Moral Mondays movement in North Carolina. Barber co-signed the letter calling for a debate with Falwell, and has repeatedly criticized prominent evangelicals who support Trump.

Although the event is being held near Liberty University, Claiborne said: "We're not there to vilify Jerry Falwell (Jr.), we're there to lift up Jesus — and that itself is the critique of toxic evangelicalism." Still, Claiborne acknowledged the impetus for the event is partly rooted in criticism of Liberty — including by Liberty students and alumni frustrated by the perception that the school inherently supports the president, its commencement speaker last May.

Claiborne was quick to note that the event is being organized in cooperation with local Lynchburg clergy, two of whom are mentioned in the news release. He also hinted at possible participation by unnamed students and faculty at Liberty. 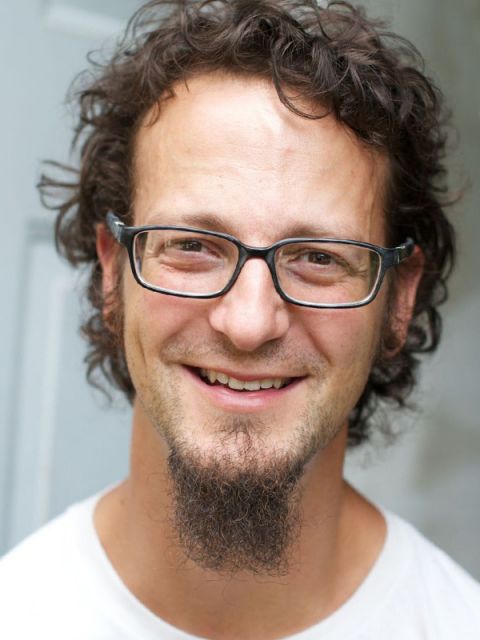 "(We are) building on some of the movement locally and different leaders there," he said. "We really don't want it to be just outside people coming in."

Claiborne said organizers are also reaching out to several musicians to ask about their participation, such as Jon Foreman of the band Switchfoot and Christian hip-hop artists Lecrae and Micah Bournes.

He said he hopes the result will lift up a different evangelical voice than that of Falwell and others.

"When evangelicals have lost our focus on Jesus, we end up talking a lot about things Jesus didn't talk about and a lot of things … and supporting things that are a direct contradiction to Matthew 25," he said, referencing Jesus' call to help the vulnerable in the Bible.

Liberty University did not immediately return a request for comment on this story.

How Christian nationalism paved the way for Jan. 6

At 'Red Letter Revival,' leaders give voice to evangelicals on the margins

Paula White: 'Our president is not a racist'