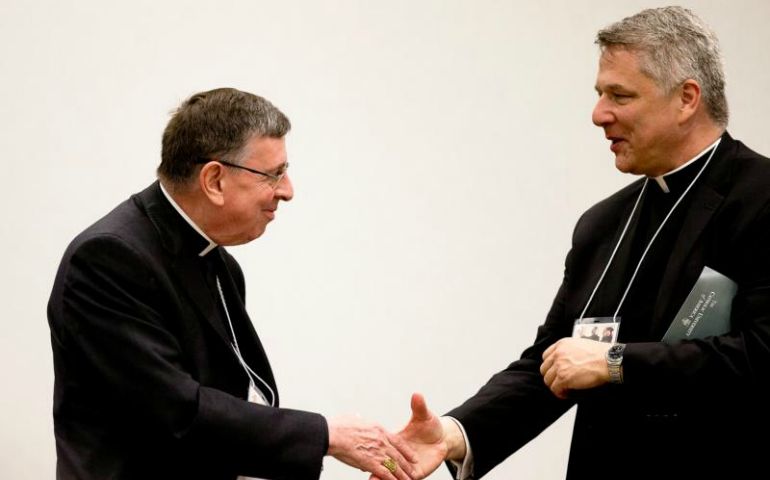 Cardinal Kurt Koch, left, president of the Pontifical Council for Promoting Christian Unity, is seen with Fr. Mark Morozowich, acting provost at The Catholic University of America in Washington, May 30. (CNS/Tyler Orsburn)

Koch's speech took place May 30 at "The 500th Anniversary of Martin Luther's Posting of the Ninety-Five Theses Conference: Luther and the Shaping of the Catholic Tradition," held at The Catholic University of America.

In his address, Koch called for a new understanding of Martin Luther that takes into account his historical and religious context.

The cardinal, who leads the Pontifical Council for Promoting Christian Unity, outlined how Luther was grounded in the monastic and mystical traditions of late medieval Catholicism, like Christ-centered theology.

He also pointed out that the reforms Luther called for were not extraordinary in their time: similar reforms were gaining traction elsewhere, like the "devotio moderna," or "modern devotion," movement in the Netherlands that called for humility and simplicity in the church, or the first multilingual edition of Scripture that was published in Spain in 1515.

Koch said the Catholic Church of the Middle Ages was partly to blame for the division.

"If Martin Luther's call for reform and repentance had found open ears among the bishops of the time and of the pope in Rome, the reform intended to be initiated by him (Luther) would not have become the Reformation. For the fact that the original reform of the church became instead a church-dividing reformation, the Catholic Church of the time must bear its share of the blame," Koch said.

He pointed out that it wasn't until later in his life that Luther began to call into question the role and structure of the church. Because of this, he said, it isn't fair to see the posting of Luther's theses as the moment the church split into Lutheranism and Catholicism.

Koch stated that political leaders in Germany were largely responsible for the formation of a distinct Lutheran Church about 100 years after Luther wrote his theses.

Still, he said, Luther's essential question about the role of the church remains important and must be addressed in the dialogue between Catholics and Lutherans going forward.

Additionally, reconciliation must be a guiding theme in the conversation, the cardinal said, referencing Pope Francis' words in Sweden last year.

Koch said that Catholics must continue to apologize for their sometimes-violent offenses, like wars, against other religious groups, just as Lutherans must apologize for the way it has painted the pre-Reformation Catholic Church over the years.

The cardinal also called for a consensus between Catholics and Lutherans on Luther's doctrine of justification — the idea that a person is saved through faith rather than actions.

"After 500 years of division," the cardinal said, "we must strive for a binding communion and put it into effect already today."

Retired Lutheran Bishop Eero Huovinen of the Diocese of Helsinki responded to the Cardinal Koch's address.

He said he agreed with everything the cardinal had said.

Huovinen focused his response instead on the 2015 Catholic-Lutheran joint "Declaration on the Way: Church, Ministry and the Eucharist," which attempts to reach common theological ground between the two groups.

Some of the scholars who drafted the declaration attended the talk.

Huovinen questioned the document's use of the word "church," since it has different definitions to Catholics and Lutherans. He also called for a closer look at the Roman Missal's language about the Eucharist as a sacrifice, which might be at odds with Lutheran theology.

Both speakers praised the progress already made to reconcile Catholics and Lutherans. They called for the 500th anniversary of the theses to be a jumping off point for a more nuanced effort toward reconciliation going forward.

The May 30-June 1 conference at Catholic University was co-sponsored by Metropolitan Washington, D.C. Synod of the Evangelical Lutheran Church in America, Catholic University's School of Theology and religious Studies, the Vatican's Pontifical Committee of Historical Sciences, and the U.S. bishops' Secretariat for Ecumenical and Interreligious Affairs.

After his fall, Law found normality in Rome