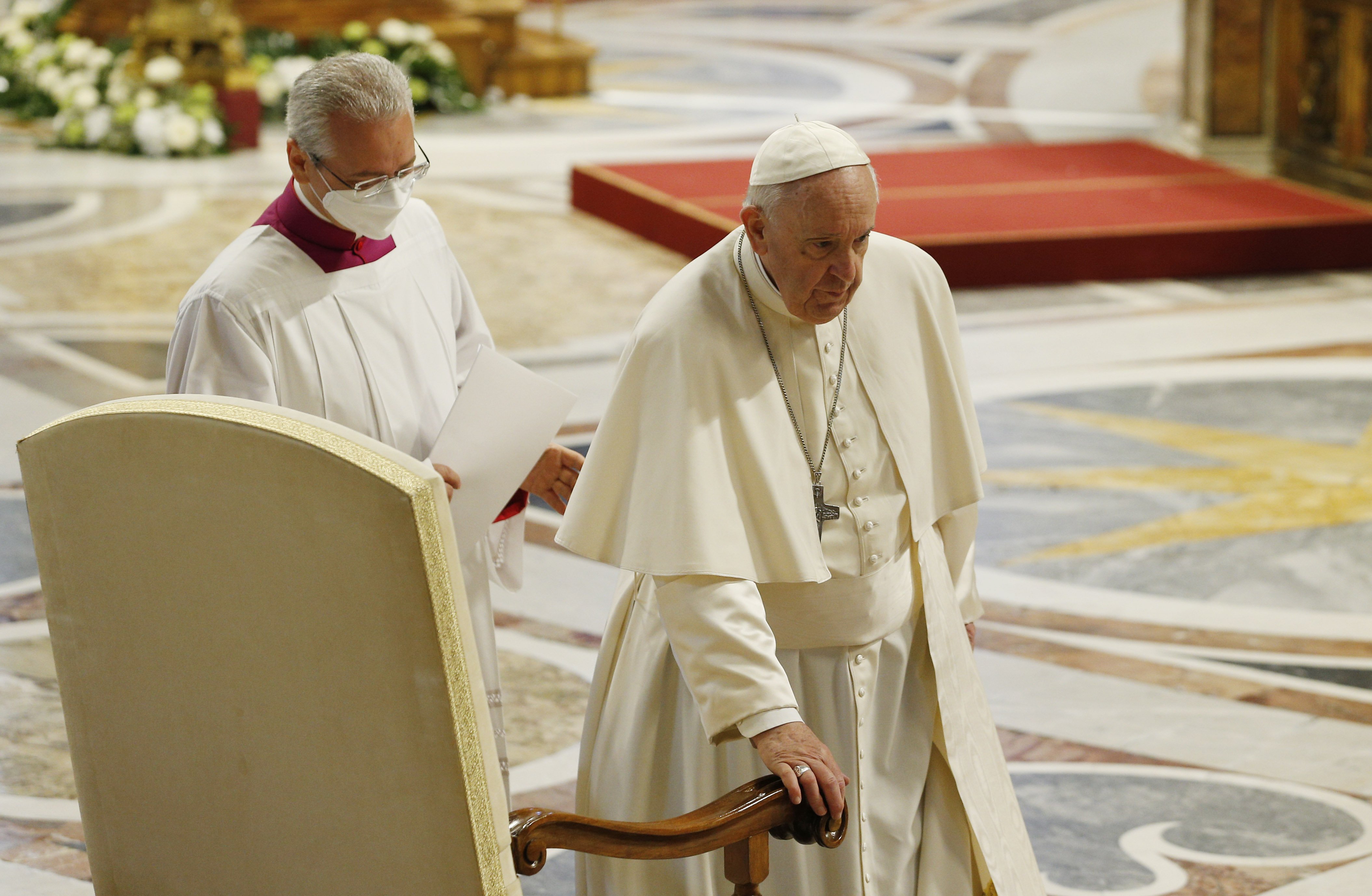 Pope Francis arrives at his seat as he participates in Mass marking the feast of Divine Mercy in St. Peter's Basilica at the Vatican April 24, 2022. (CNS photo/Paul Haring)

VATICAN CITY — The mercy shown by God to his children can transform hearts and makes Christians become channels of that mercy to those in need, Pope Francis said.

"In the midst of our own crises and our difficulties, divine mercy often makes us aware of the sufferings of our neighbor," the pope said April 24 at a Mass in St. Peter's Basilica commemorating Divine Mercy Sunday.

"We think that we are experiencing unbearable pain and situations of suffering, and we suddenly discover that others around us are silently enduring even worse things," he said.

Divine Mercy Sunday, celebrated every year on the Sunday after Easter, was added to the universal church calendar by St. John Paul II in 2000. The Polish pope was a longtime devotee of the Divine Mercy devotions of St. Faustina Kowalksa, whom he beatified in 1993 and canonized in 2000.

Like on Easter, Pope Francis did not preside over the Mass due to difficulty walking. In an interview with the Argentine daily newspaper La Nación published April 21, the pope explained that his limited mobility and pronounced limp are due to a torn knee ligament.

Italian Archbishop Rino Fisichella, president of the Pontifical Council for Promoting New Evangelization, was the main celebrant at the Mass. However, Pope Francis delivered his homily from a chair in front of the altar.

In his homily, the pope reflected on the Sunday Gospel reading from St. John, which recalled Jesus appearing to his disciples after his resurrection and greeting them with the words, "Peace be with you."

The pope said those words gave the disciples joy, granted them forgiveness and offered them comfort, which are three key aspects of God's mercy toward his children.

Jesus' greeting gave joy to the disciples, who had not only locked themselves behind closed doors after Christ's death, but "were also closed in on themselves, burdened by a sense of failure," he explained.

"They were disciples who had abandoned their master; at the moment of his arrest, they had run away. Peter even denied him three times, and one of their number — one from among them — had betrayed him. They had good reason to feel not only afraid, but useless; they had failed," the pope said.

Upon appearing to his disciples, he continued, Jesus did not reproach them but instead showed them kindness which "revives them, fills their hearts with the peace they had lost and makes them new persons, purified by a forgiveness that is utterly unmerited."

Like them, he said, Christians also feel that joy after confession, through the consoling words of others or through an unexpected event that brings God's pardon and peace.

"The joy God gives is indeed born of forgiveness. It bestows peace. It is a joy that raises us up without humiliating us," he said.

After greeting his disciples, the pope continued, Jesus sends them to the world to become "agents of reconciliation" and to bring mercy to others, "not on account of their merits, but as a pure gift of grace, based on their experience of having been themselves forgiven."

"In the church, today and every day, forgiveness must be received in this same way, through the humble goodness of a merciful confessor who sees himself not as the holder of some power but as a channel of mercy, who pours out upon others the forgiveness that he himself first received," he said.

Departing from his prepared remarks, the pope encouraged the priests to become channels of God's forgiveness "through your own experience of being forgiven."

"Do not torture the faithful who come with their sins. Listen and forgive and give them good counsel. God forgives everything. Do not close that door," he said.

Lastly, Jesus greets his disciples with the same words of peace when he appears to his disciples again and "strengthens the flagging faith of Thomas."

Jesus, he said, was "not offended by Thomas' disbelief but instead comes to his aid" by asking him to touch his wounds.

"These are not words of defiance but of mercy," the pope said. "Jesus understands Thomas' difficulty. He does not treat Thomas with harshness, and the apostle is deeply moved by this kindness."

Like Thomas, all believers experience moments of crisis that put their faith to the test, he added. In those moments, Jesus does not approach in triumph, with "overwhelming proofs" and "earth-shattering miracles," but instead, "comforts us in the same way he did in today's Gospel: He offers us his wounds."

Pope Francis said Christians also become aware of the sufferings of others around them when they experience Jesus' mercy, and he encouraged them to take the soothing "balm of mercy" to others.