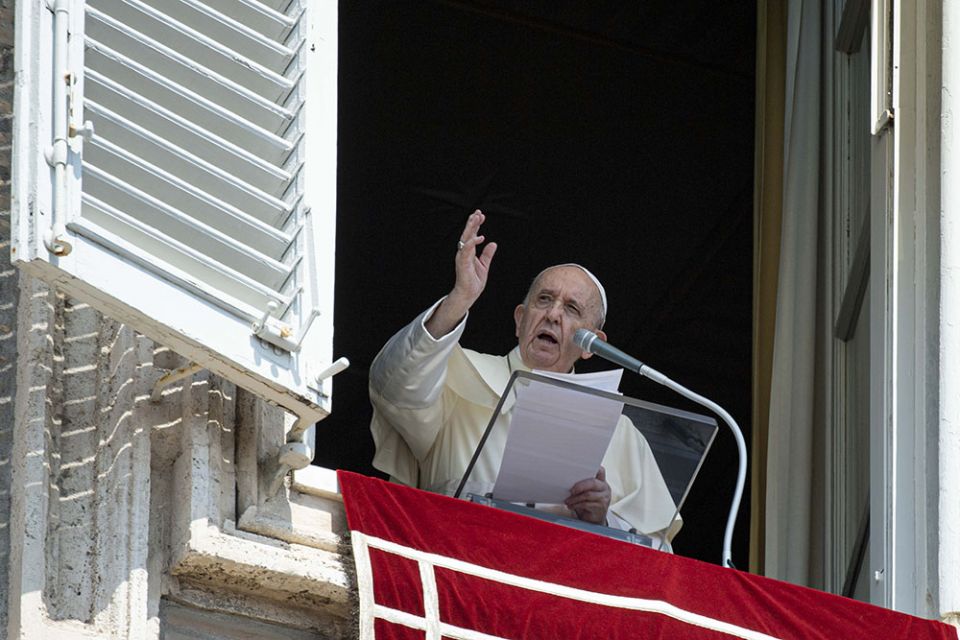 Pope Francis leads the Angelus from the window of his studio overlooking St. Peter's Square at the Vatican Aug. 22. (CNS/Vatican Media)

Vatican City — God can be found in the humanity of Jesus and in the people one meets in life, Pope Francis said.

"Jesus affirms that the true bread of salvation, which transmits eternal life, is his very flesh; that to enter into communion with God, before observing the laws or satisfying religious precepts, it is necessary to live out a real and concrete relationship with him," the pope told those gathered in St. Peter's Square Aug. 22 during his Sunday Angelus address.

This relationship is necessary "because salvation came from him, in his incarnation. This means that one must not pursue God in dreams and in images of grandeur and power, but he must be recognized in the humanity of Jesus and, as a consequence, in that of the brothers and sisters we meet on the path of life," he said.

The pope reflected on the Sunday Gospel reading from St. John in which many of Jesus' followers were shocked or found it hard to accept what Jesus said about being the "bread that came down from heaven." Some turned their back on Jesus and stopped following him.

But Simon Peter spoke on behalf of the 12 disciples, confirming their decision to stay with Jesus, saying: "Master, to whom shall we go? You have the words of eternal life. We have come to believe and are convinced that you are the Holy One of God."

Commenting on the passage, Francis said Peter's response "is a beautiful confession of faith."

But, he said, it was also important to understand the reason for the others' disbelief and rejection.

"Jesus' words enkindled great scandal: He was saying that God decided to manifest himself and accomplish salvation in the weakness of human flesh. It is the mystery of incarnation," which may be shocking or an obstacle to faith for people today, too, the pope said.

It is the "folly" of the Gospel for those "who seek miracles or worldly wisdom," and "the world is scandalized" that people can be nourished by the bread of the Eucharist.

When Jesus explained his miracle of the loaves and fishes was a sign of "his sacrifice, that is, of the gift of his life, his flesh and blood, and that those who want to follow him must incorporate him, his humanity given for God and for others ... this Jesus no longer was no longer liked, this Jesus throws us into crisis," Francis said.

"We should be worried if he does not throw us into crisis, because we might have watered down his message," he added.

"God made himself flesh and blood; he lowered himself to the point of becoming a man like us," burdening himself with people's sufferings and sin, he said.

That is why God asks people to seek him "in relationship with Christ and with our brothers and sisters. Seeking him in life, in history, in our daily life," he said.

This, he said, "is the road to the encounter with God: the relationship with Christ and our brothers and sisters."

Theology | Seek God through a relationship with Christ, others, pope says at Angelus

Holiness comes through humanness, not in opposition to it

Twentieth Sunday in Ordinary Time: God in the flesh