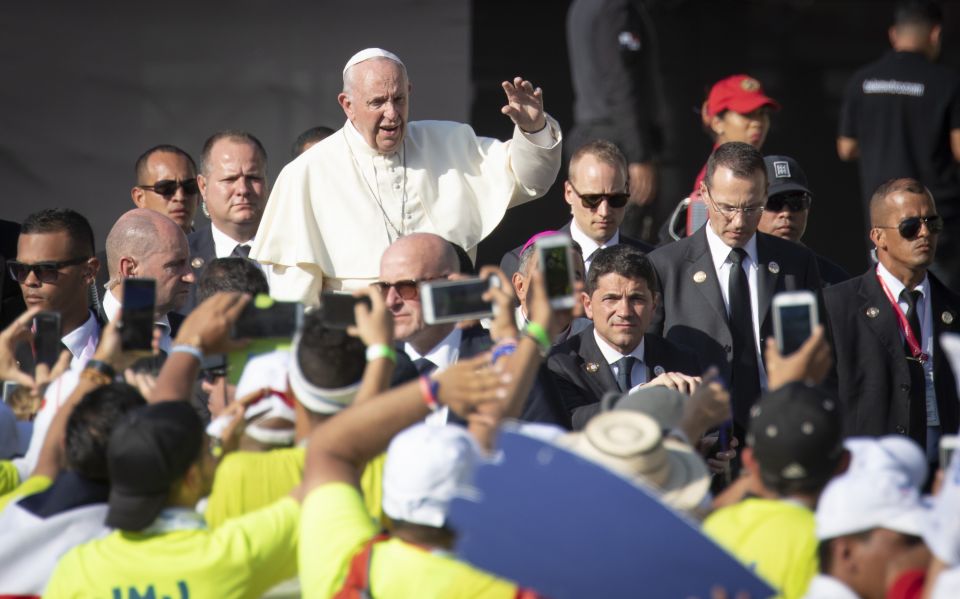 ABOARD THE PAPAL FLIGHT FROM PANAMA — Pope Francis closed the door Jan. 27 on his making celibacy optional for all Catholic priests, but also expressed openness to allowing older married men to be ordained to the priesthood where there is a "pastoral necessity."

In a press conference aboard the papal flight back to Rome after a five-day visit to Panama, the pontiff first stated firmly: "I am not in agreement with making celibacy optional."

But the pope then noted that there are areas of the world where Catholics are deprived of the Eucharist — mentioning specifically the Pacific Islands and the Amazon region — and said "it is a thing to think [about] when there is a pastoral necessity."

"I believe that the issue must be open in this sense: where there is a pastoral problem because of the lack of priests," said Francis. "I will not say that it must be done. Because I have not reflected, I have not prayed sufficiently over this. But the theologians must study."

Francis spoke about priestly celibacy in a 47-minute press conference in which he also sought to downplay expectations for an upcoming February Vatican summit on clergy sexual abuse with the presidents of the world's Catholic bishops' conferences.

On celibacy, the pontiff was asked if he could imagine a future in which the Catholic Church would adopt the practice of Orthodox churches, which allow priest candidates to choose during their formation period whether to marry or remain celibate.

The pope referred to a phrase he attributed to Pope Paul VI: "I would prefer to give my life before changing the law of celibacy." He noted that in the Orthodox tradition, priestly candidates must choose whether they will marry before they are ordained deacons.

"Maybe I am closed-minded, but I do not feel that I can place myself before God with this decision." — Pope Francis

"My decision is: optional celibacy before the diaconate, no," said Francis.

"It's personal, but I will not do it," he said. "Maybe I am closed-minded, but I do not feel that I can place myself before God with this decision."

Referring later to places where Catholics do not have access to the Eucharist, the pontiff mentioned the work of a theologian he had been reading. The pope said the academic stated: "The church makes the Eucharist and the Eucharist makes the church."

The pope said the theologian mentioned the possibility of ordaining "an older, married man … but only for the exercise of the sanctifying munus: namely, celebrating the Mass, administering the Sacrament of Reconciliation and giving unction to the sick."

Priestly celibacy has been a subject of conversation in recent months, as the Vatican is preparing for a special October meeting of bishops of the Amazon region called by Francis.

There has been speculation that some of the bishops coming to the event, called a Synod, may propose allowing the ordination of older married men as one solution to a lack of priests available across the vast distances of the Amazon rainforest.

Francis had been in Panama Jan. 23-27 for the triennial celebration of World Youth Day. Among other issues during the press conference, the pontiff was asked why he thought some young people distance themselves from the church.

The pope identified a "lack of witness" by priests and bishops.

Francis also criticized "Catholic hypocrites who go every Sunday to church and then … pay under the table, take advantage of people and then go to the Caribbean for vacation."

"If you do this, you give a counter-witness," said the pope. "To me, this is what distances people from the church most."

A version of this story appeared in the Feb 8-21, 2019 print issue under the headline: Pope visits Panama amid abuse crisis scrutiny .

Pope encourages Knights of Malta to continue path of renewal

Francis: Vatican reform does not serve itself, but evangelization