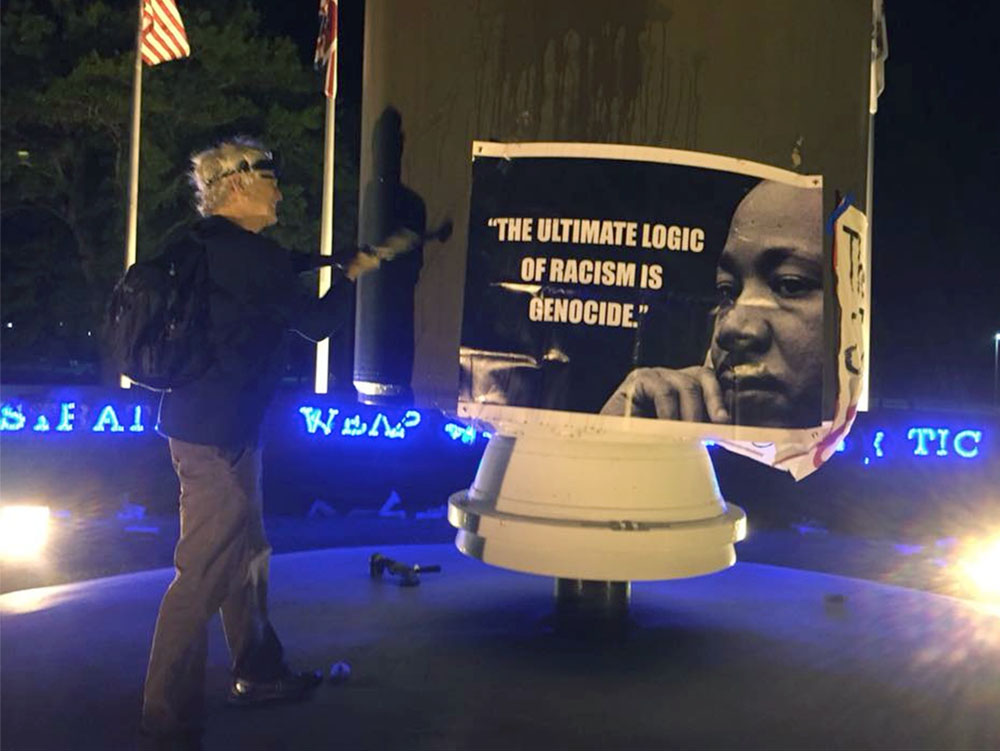 Patrick O’Neill attempts to deface a nuclear monument with a hammer at the Kings Bay Submarine Base in April 2018. (RNS photo/Courtesy of the Kings Bay Plowshares 7)

Seven Catholic peace activists who broke into a nuclear submarine base in Kings Bay, Ga., last year stood before a federal judge Wednesday (Aug. 7) to argue that the charges against them should be dismissed.

The activists, known as the Kings Bay Plowshares 7, are charged with three felonies and a misdemeanor and face up to 25 years in prison each for trespassing on the U.S. Navy base that houses six Trident submarines carrying hundreds of nuclear weapons.

A crowd of about 100 people that included the actor Martin Sheen packed the three-hour hearing in Brunswick, Ga., as the seven and their lawyers made their case before U.S. District Judge Lisa Godbey Wood.

The defendants, mostly middle-aged or elderly, are residents of Catholic Worker houses, a collection of 200 independent houses across the country that feed and house the poor. As the hearing began, several were in the middle of a four-day liquid-only fast to mark the 74th anniversary of the atomic bombings of Hiroshima and Nagasaki.

The Kings Bay 7 are part of a 39-year-old anti-nuclear movement called Plowshares, inspired by the pacific prediction of the biblical prophet Isaiah that the nations of the world shall "beat their swords into plowshares." Its activists have made a signature of breaking into nuclear weapons bases to hammer on buildings and military hardware and pour human blood on them. 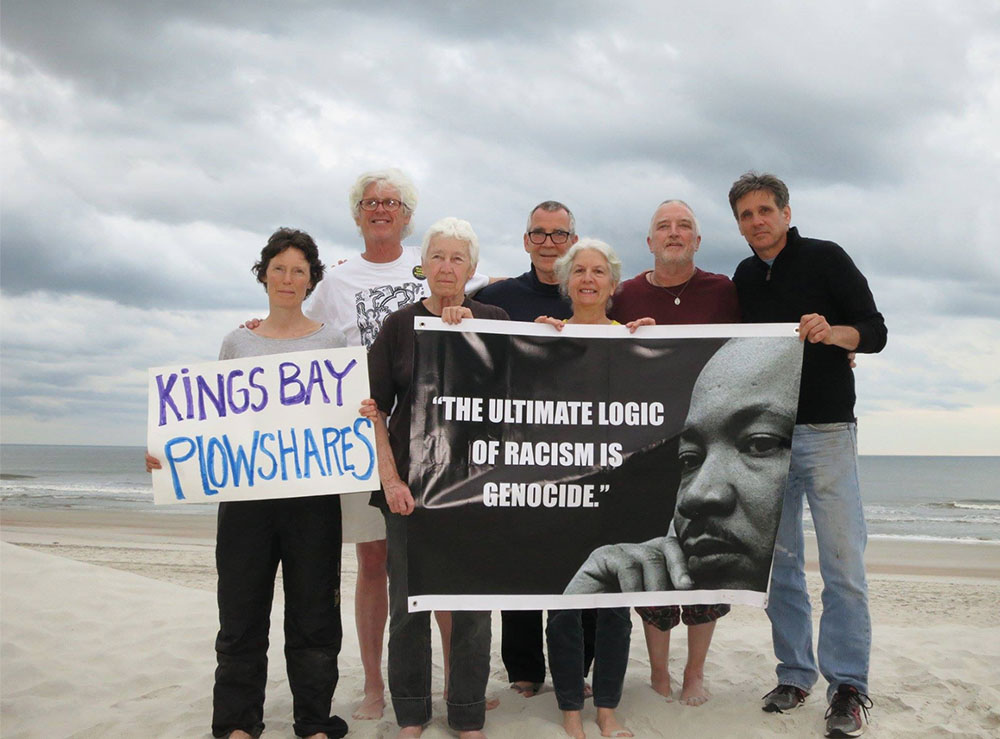 Patrick O’Neill, a 63-year-Catholic worker from North Carolina who represented himself, was the first to speak before the judge. Reading from a prepared statement, he told her he was guided in his actions by the New Testament Epistle of James, which says "Faith without works is dead."

"My actions are an extension of my beliefs," he told the judge. "This connection between sincerely held religious beliefs and sacramental practice (action) are one and the same."

The facts of the case are not disputed; indeed, the seven documented their actions for the judge with photos and videos. 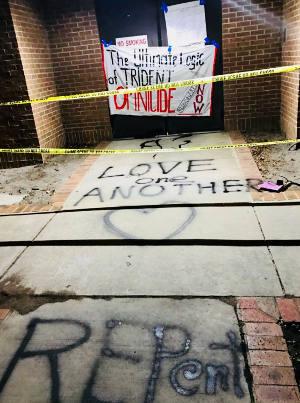 Part of the graffiti messaging left at the Kings Bay Submarine Base in April 2018. (RNS photo/Courtesy of the Kings Bay Plowshares 7)

On the night of April 4, 2018, they stole onto the Kings Bay Naval Submarine Base in St. Marys, Ga., by cutting a padlock and later a security fence. They spilled blood on Navy insignia affixed to a wall, spray-painted anti-war slogans on a walkway and banged on a monument to nuclear warfare using hammers made of melted-down guns.

They were caught more than an hour into their action, as three of the activists prepared to cut the heavily electrified fence leading to the nuclear storage bunkers.

The group individually and through its lawyers are using a novel defense: the Religion Freedom Restoration Act, a 1993 federal law that says the government may not burden the faith practices of a person with sincerely held religious beliefs.

The law was famously used by Hobby Lobby Stores when the company challenged the government’s contraceptive mandate, arguing it placed a burden on the chain owner’s Christian beliefs. The Supreme Court agreed.

More recently, the law was used by Scott Warren, the Arizona geographer who was charged with aiding two migrants along the U.S.-Mexico border. Warren argued that his basic humanitarian values justified his actions. That case resulted in a mistrial in June.

Citing RFRA as part of their defense allowed the seven to talk about their religious motivations, which may not have otherwise been admissible.

Three of the defendants, the Rev. Steve Kelly, Elizabeth McAlister and Mark Colville, have been in jail since the break-in last year. They declined to accept the conditions of the bail — an ankle monitor and $50,000 bail — and have remained in the Glynn County Detention Center.

Ira Lupu, professor emeritus of law at the George Washington University Law School, said he had great respect and admiration for the Plowshares' actions but suspected they would not win a dismissal of their charges.

“The government is going to say, ‘We’re defending the United States,’” he said. Furthermore, he added, the government can convincingly demonstrate a compelling interest in protecting these bases from trespass, interference and disruption. 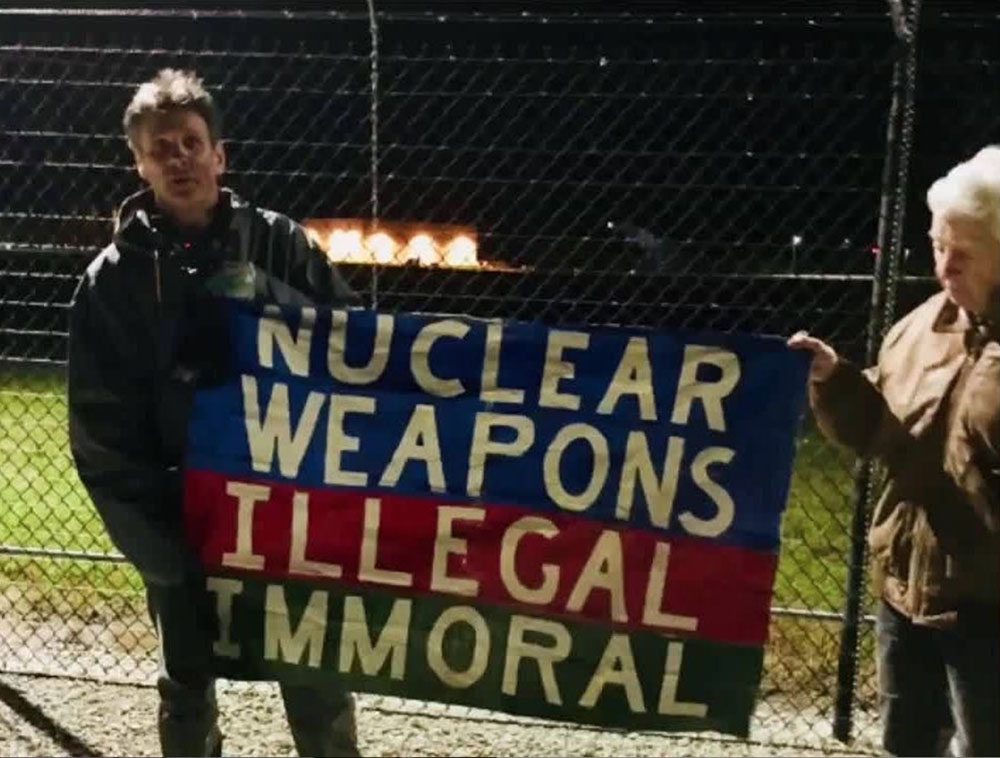 Three of the defendants — O’Neill, Carmen Trotta and Clare Grady — read their personal statements to the judge, who also interrogated the group's lawyers . The lawyers argued the court should dismiss the charges because the government failed to offer them the least-restrictive means of resolving the charges against them.

Both O'Neill and Trotta said they did not expect the charges against them to be dismissed but felt somewhat encouraged by the day’s proceedings.

"The judge runs a tight ship," said Trotta, 56. "But I think she respected us. We think it was a good day."

"Of the millions of practicing Catholics in the United States, there’s a tiny fraction of them willing to risk their lives for the gospel, to live not only creative and honest lives, but blessed lives," Sheen said in a phone interview Wednesday afternoon.

"I was nourished and inspired by what I saw in the courtroom during the hearing," he said. "This is the closest I’ll get to this level of heroism and activism. These are my heroes."

The judge is expected to issue an opinion in a few weeks on whether the case should proceed to a trial.