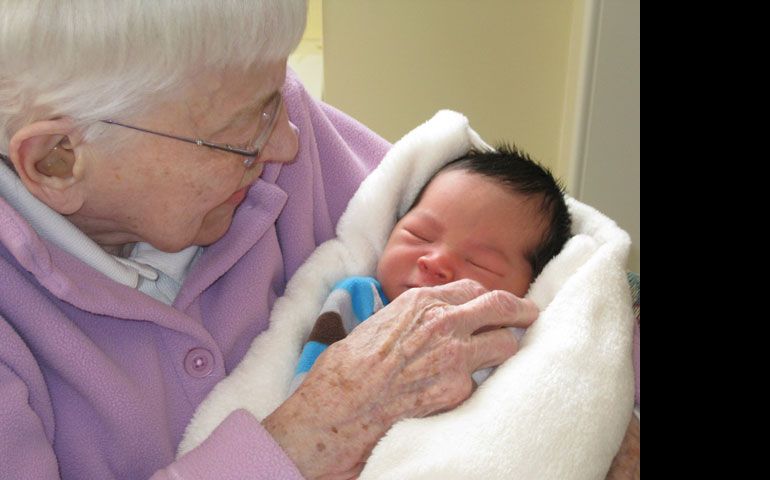 During the 2010 Christmas season, the Benedictine sisters of Baltimore found themselves in the midst of a modern-day Christmas story. The sisters were asked to provide shelter to an eight-month-pregnant Muslim woman seeking asylum in the United States.

Amina, a woman from Afghanistan, was forced to flee her home earlier in 2010 because she was pregnant and unmarried and her life was in danger. How she arrived in Baltimore is a mystery to those who helped her, but when she came seeking a place to stay, they knew they had to do something to keep her safe.

"I received a phone call at home on Dec. 28 from the United Way," said Molly Corbett, who at the time was working for the Benedictine sisters as a development consultant.

"All of the nonprofits who could help were closed and they were looking for a place for this pregnant woman who had just arrived in the country. She had been turned away by another nonprofit and they didn't know where to send her."

When Corbett learned the woman was seeking asylum, she knew it was likely the woman had been through a lot of trauma in her journey and sending her to a shelter might re-traumatize her. So they needed to find another option.

Asylum is an immigration status for migrants seeking protection in the United States. Once they arrive as asylum seekers, they have to prove past persecution or a well-founded fear of danger in their home country on the basis of race, religion, social group, political opinion or national origin in order to receive permission to stay. Most people who come to the U.S. as asylum seekers have escaped dangerous situations and spent extended periods of time in refugee camps along the way. They also face a long legal process to be granted the safety they seek.

Knowing that the situation required a secure place and after considering taking Amina into her own home, Corbett thought she might ask the sisters at Baltimore Emmanuel Monastery.

"I called the Benedictines and they said yes, they could take her in, but they didn't think a baby at the monastery was the best idea," Corbett said. "I assured them we had four weeks and we would find another place. I brought Amina there and she had the baby on the Epiphany."

Benedictine Sr. Kathleen White, prioress of Emmanuel Monastery, said she was not home when Corbett called, but the sisters who were there decided they could not turn away a pregnant woman in need of safety and it would be reasonable to offer her refuge for a short period of time.

"She came on Jan. 1 and was very quiet but thankfully spoke some English," White said. "Molly assured us it would only be a couple of days and they would find another place."

White felt the decision to offer the woman a place to stay was significant for both the time of year and the life of the monastery.

"On the feast of Mary Mother of God, we had a pregnant Muslim woman come and stay with us and on the traditional feast of the Epiphany, the baby was born at Mercy Hospital," White reflected. "It was a profound experience for us."

Amina gave birth to a boy, Aasim, on Jan. 6, 2011, at Mercy Medical Center in Baltimore. The women at Emmanuel Monastery, a community of only 19 sisters, supported Amina through the process and were eager to welcome the new family back to live with them. This hospitality gave Amina the support she needed to begin the legal process and establish a sense of security and community in Baltimore.

"She came back and we had a mother and a baby and they weren't going anywhere. We wound up to be the grandmothers," White remembered. "They ended up living at the monastery for two years. This was a powerful feeling, both the woman and the child who brought a new purpose to the older sisters."

Through the network of women religious Corbett and White knew, they were able to address many of the needs Amina would require in giving birth and beginning application for asylum.

"Because of the networks the sisters have here, she was able to go to Mercy Hospital to have the baby pro bono and we got her an attorney," White said. "We were able to network her so quickly and we had all these people asking what they could do to help."

In the process of helping one woman from Afghanistan, Corbett and White created Asylee Women Enterprise (AWE), a collaboration of nine Baltimore-area women's religious communities, organized to aid asylum seekers arriving in Baltimore.

"We realized this is such a huge need across the country and especially here in Baltimore," White said. "We have thousands of asylum seekers in Baltimore who have no place to live and have no benefits, so we pulled together these communities and said what do you think about doing this, what do you think about starting this type of organization, and every community said yes."

Corbett, who now serves as executive director of AWE, understands the potential to help people by providing transitional housing, companionship and community in Baltimore.

What I realized when I saw the connection between Amina and the sisters was that what many asylum seekers need is a sense of community," Corbett said. "My personal experience with Amina helped me to vision the possibility for AWE."

Asylee Women Enterprise started out with a mission to serve women, but has since been able to expand to helping men and families. Over three years, beginning with Amina and Aasim, they have helped more than 75 people and are expanding the services they offer. Currently, AWE communities provide housing, an arts and craft co-op that allows people to earn a small amount of money and learn new skills, and community. Through the effort to build community, AWE also provides support through the immigration process. The help Corbett is able to organize for asylum seekers also includes rides to attorney visits, doctor appointments, classes in English as a second language, and immigration court.

Corbett believes these services are essential to helping someone begin the road of building security in a new place.

"Women and men who come here seeking asylum are here legally but do not receive any government benefits until their asylum has been decided," Corbett said. "The asylum process for most people takes two years and during this time they are vulnerable, lonely and destitute."

Sr. Elizabeth Langmead's community, the Mission Helpers of the Sacred Heart, hosts several asylum seekers and houses the AWE arts and crafts co-op. She called the co-op a great mission because it gives the asylum seekers a creative outlet, a sense they are contributing, and a small stipend.

"It's been beautiful to see transformations and see the women become as much a part of this community as they want," Langmead said. "It's been thrilling to see them grow and witness their courage and hope." It has also revitalized her community, she said.

The sisters at Emmanuel Monastery have created a lifelong relationship with Amina and Aasim. They continue to support her with child care, prayers and hospitality, even though she has moved from the monastery to begin school and settle into an apartment among Baltimore's Afghan community. Amina's return visits have created a unique relationship among Catholics and Muslims. Often the sisters will welcome her and her new friends back to the monastery for holidays and celebrations.

Editor's note: The names of the mother and child have been changed for their protection and privacy.

[Colleen Dunne is a Bertelsen intern at NCR. Her email address is cdunne@ncronline.org. Follow her on Twitter: @coldun14.]

| Transformations follow after nuns take in mother and child