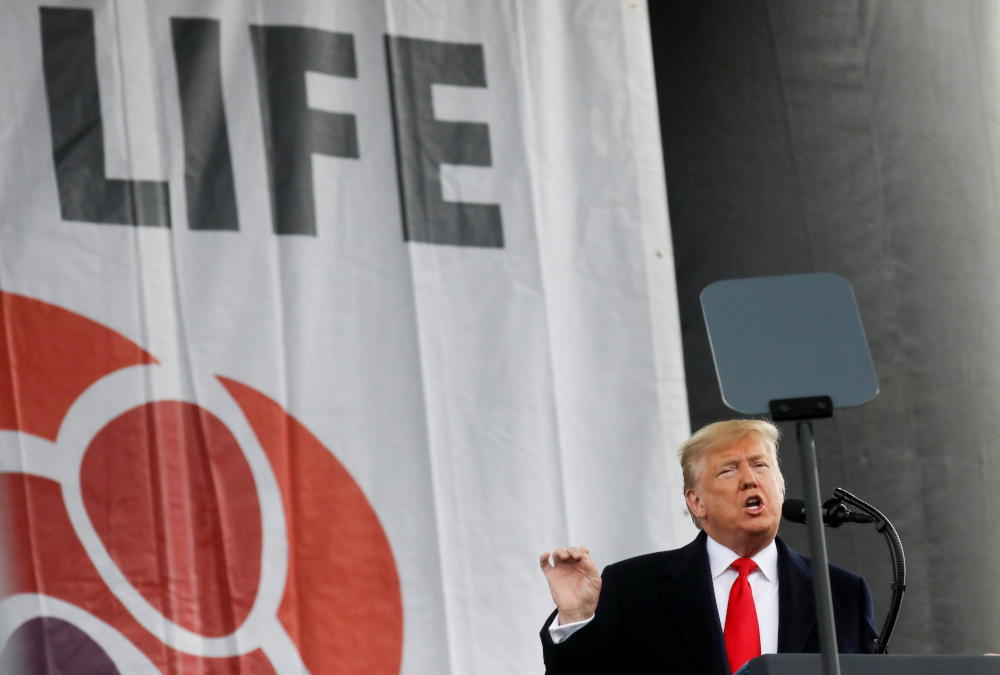 U.S. President Donald Trump addresses thousands of pro-life supporters during the 47th annual March for Life in Washington Jan. 24, 2020. He is the first sitting president to address the pro-life event in person. (CNS/ Reuters/Leah Millis)

The Trump administration announced Jan. 24 it is taking steps to enforce the Weldon Amendment, a federal law that prohibits discrimination by states against health insurance plans that do not cover abortion.

The move "is extraordinarily good news for the right to life, conscientious objection, religious freedom and the rule of law," said a statement from the chairmen of the U.S. bishops' pro-life committee and their religious liberty committee.

In their statement, they noted that since 2014, the California Department of Managed Health Care has forced all employers — even churches — to "fund and facilitate" elective abortions in their health plans "in direct violation" of the Weldon Amendment.

The committee chairs are Archbishop Joseph F. Naumann of Kansas City, Kansas, chairman of the U.S. Conference of Catholic Bishops' Committee on Pro-Life Activities, and Bishop George V. Murry of Youngstown, Ohio, chairman of the Committee for Religious Liberty.

The Trump administration's announcement came on the day tens of thousands of pro-lifers from across the country gathered in Washington for the annual March for Life on the National Mall.

Calling the "coercive" California policy "abhorrent, unjust and illegal," Naumann and Murry said: "We strongly commend the Trump administration for taking this critical action to enforce federal law and correct this supreme injustice to the people and employers of California."

"Sadly, violations of federal conscience laws are on the rise," the prelates said. "We hope that this enforcement action, and subsequent actions by the Administration, will stop further unlawful discrimination against people who reject abortion as a violation of the most basic human and civil rights."