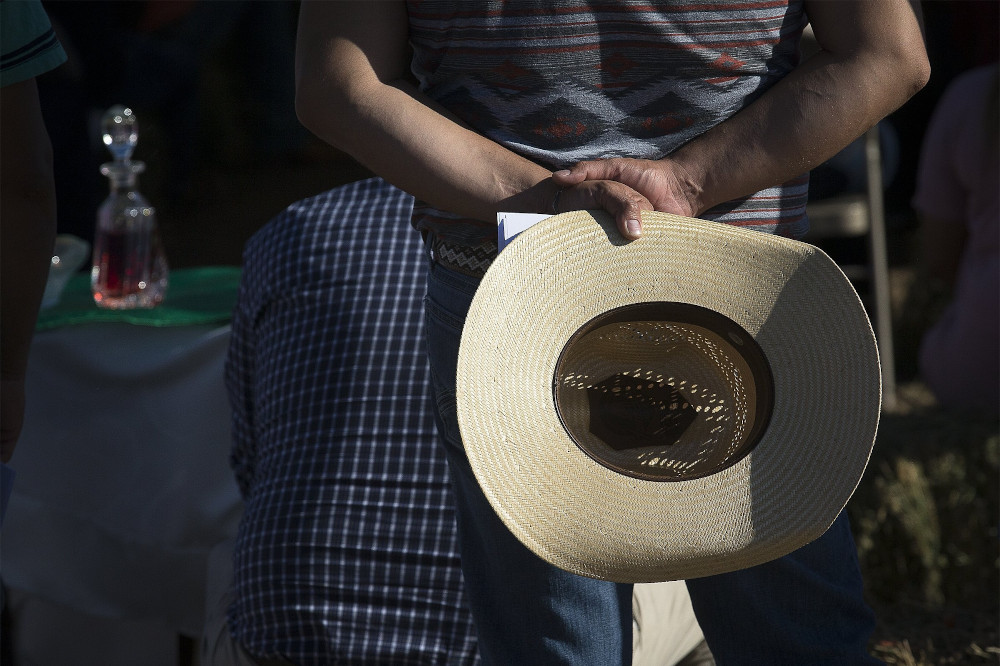 Migrant farmworkers in Hatch, New Mexico, attend Mass in a chili pepper field Sept. 26, 2019, during a pastoral visit by U.S. bishops to the border. (CNS/Tyler Orsburn)

With upward of 70 million Catholics in the United States, one might think the U.S. church would have its hands full tending to their pastoral needs. And that may be so.

But it has only been since March 2020 that much of the United States, including its Catholic population, has been living as much of its life as possible at home behind closed doors to avoid contracting COVID-19.

There are millions of others in this country for whom a fixed address is less of an expectation than an aspiration. They include refugees, migrants, people whose work demands that they travel, and victims of human trafficking. That doesn't even count the 79 million international visitors to the United States in a typical year.

The U.S. Catholic Church, though, may be missing out on an opportunity to increase and enrich its ranks if dioceses and parishes don't reach out to these groups. The Census Bureau's General Social Survey estimates that of all foreign-born residents of the United States, 40% are Catholic, nearly double Catholicism's reach in the entire U.S. population.

The U.S. bishops' Subcommittee on Pastoral Care of Migrants, Refugees and Travelers commissioned the Center for Applied Research in the Apostolate in Washington to learn about the scope of such outreach efforts.

The result is a report titled, "The Pastoral Care of Migrants, Refugees and Travelers: Worship Site Inventory and Demographic Study," which was issued in June.

Most CARA surveys of U.S. parishes get a 15% response rate. This survey, which went not just to parishes but all known U.S. "worship sites" including airport chapels and places of pilgrimage, got just a 12% response rate. A separate survey sent to diocesan chancellors got about a 30% response rate.

Taken together, the listings of each diocese's parishes and ministries that cater to immigrant and traveling groups fit onto one page. Some had two pages, and a scant few went to a third page. One diocese which had "an amazing response" in the words of Mark Gray, CARA's senior research associate, was the Diocese of San Bernardino, California, which took up four pages.

In 14 Latin-rite dioceses, the largest being the Archdiocese of San Francisco, neither the diocese nor any of its parishes responded to the CARA survey.

It puzzles Gray, at least in part. Some of the reminders to complete the survey were sent not by CARA, he said, but by the U.S. Conference of Catholic Bishops.

Seen another way, though, he said, "I definitely feel for pastors. They get inundated by surveys. They have two, three, four, even more parishes, so by no means do I think that they have the time, necessarily, to do these kinds of things, so in no way am I critical."

"It would have been helpful if we had a larger response rate," said Bishop Joseph Tyson of Yakima, Washington, chair of the subcommittee, in a June 23 email to Catholic News Service.

One trend, he noted, is that "there is a real gap" between what the diocese self-reports and what the research indicates.

"Migrant and refugee groups often go unnoticed by local parishes and dioceses. At least that is what the data may suggest," Tyson said. "There may not be a felt imperative to go out greet and meet. Many parishes may simply be waiting (for them) to show up and many may not be attitudinally prepared to reach out to new arrivals who are Catholic."

He added, "What might also be notable is where people are moving. Note the metropolitan areas where folks are moving. The diocesan surveys when compared with the census data may suggest a need for more intentional outreach for families moving around from one part of the country to another.

"Often these folks may be more affluent families moving around due to their corporation, their profession or work," Tyson said. "I know from my time as auxiliary bishop (in Seattle) there is some level of awareness by pastors. One pastor felt like he was doing 'corporate campus ministry' with the average family staying about five years before being moved." 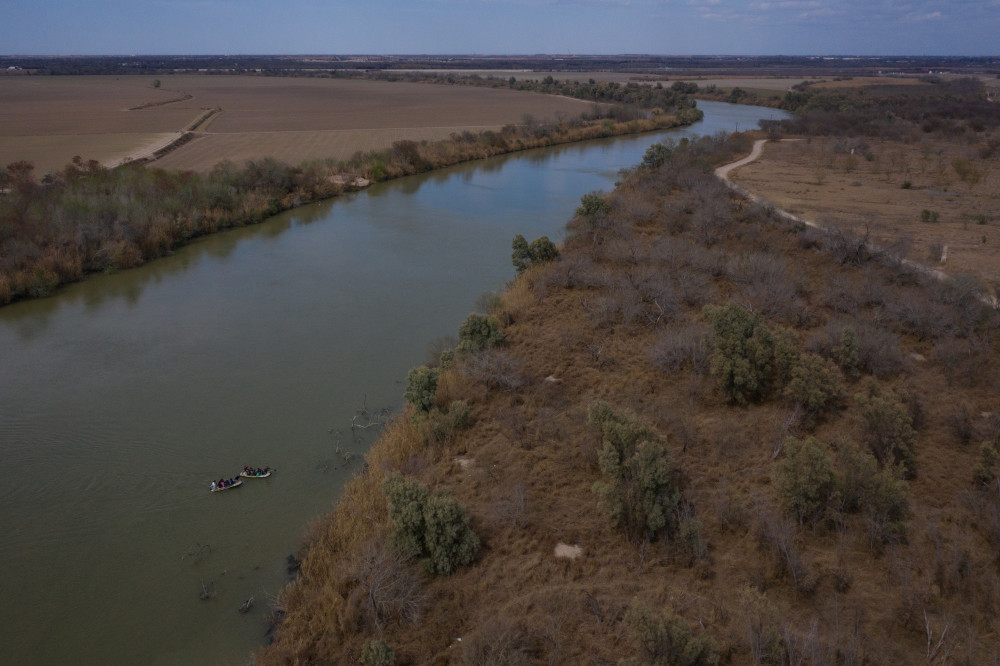 Smugglers in Mexico use rafts to transport migrant families and children across the Rio Grande into Penitas, Texas, on March 5. (CNS/Reuters/Adrees Latif)

The CARA survey asked about resources and best practices.

The Diocese of Austin, Texas, replied with a best practice — the "Our Kids at Heart" initiative, a tuition support program with the objective to inspire hope and transform lives, and make stronger families and communities through Catholic education for Hispanic youth.

Asked to share one pastoral resource that could be emulated elsewhere, the Diocese of Brownsville, Texas, replied that "through the Humanitarian Respite Center, " the diocese "is answering the call to care and restore human dignity to individuals upon their release from ICE (Immigration and Customs Enforcement) detention centers seeking refuge or asylum."

The surrounding communities, including bishops, priest(s), religious, laypersons and parishioners, are invited to be part of a wonderful ministry that provides hope to those who feel hopeless," the diocese said.

Asked to share an educational resource: the Diocese of Lafayette, Indiana, replied: "In nine parishes, Hispanic immigrant families have been integrated to their parishes by the program named Parent Leadership Formation. This program is offered in the setting of small communities of support that allows them to share their lives, their immigrants' difficulties and parental challenges, and to enlighten them with the Gospel."

Despite the low response rate, "we did learn a lot," said CARA's Gray. "There are some communities, Irish travelers. There are no estimates whatsoever anywhere. So to find these parishes that say, 'Yeah, we're aware of these communities,' that's important. And the census doesn't ask specifically about circus workers. It's a unique resource."

And there's more out there, he believes, "especially with places like, obviously, the airport chaplain. You would expect every single one of them to respond. But it's a part-time person there, overwhelmed, it's in a stack (of mail) and they don't respond."

And when it comes to showing what's known to be out here, Gray added, "it's hard to show mapping in a report like this, but we do have a map, it's down to the ZIP code."

Don't look for any conclusions in the report. "We just kind of say here's the data. We don't have any policy recommendations," Gray said. 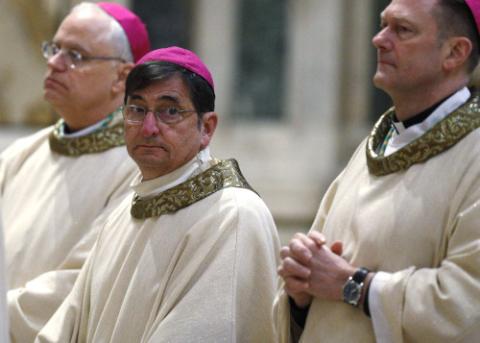 Tyson, in a follow-up phone interview with CNS June 23, is in the midst of formulating some conclusions of his own.

"Are we missionary? Are we reaching only the people who pass through the doors of the church, or are we finding the folks that are already there?" he asked.

When Pope Francis speaks of a missionary option, he said, "that missionary option is to go out of ourself. If people don't come into the church, we go out to them. ... It really requires a shift in attitude and understanding" with the parish becoming a "mission center," Tyson said.

He said there is another trend in which bishops "tune in to the hot-button issues."

"We're distracted with whatever's in front on our plate, but there's some deeper mission questions that are going on. It's a tough one," he said. "This was started before COVID. Nobody knew COVID was going to erupt, and we finished this study during COVID. A lot of us are thinking about how we bring people back to church."

Tyson, who earlier this year spent time with a priest and diocesan seminarians in migrant worker dorms in Yakima, said that "there's some good things going on" in ministry outreach, but "there's a long journey ahead."