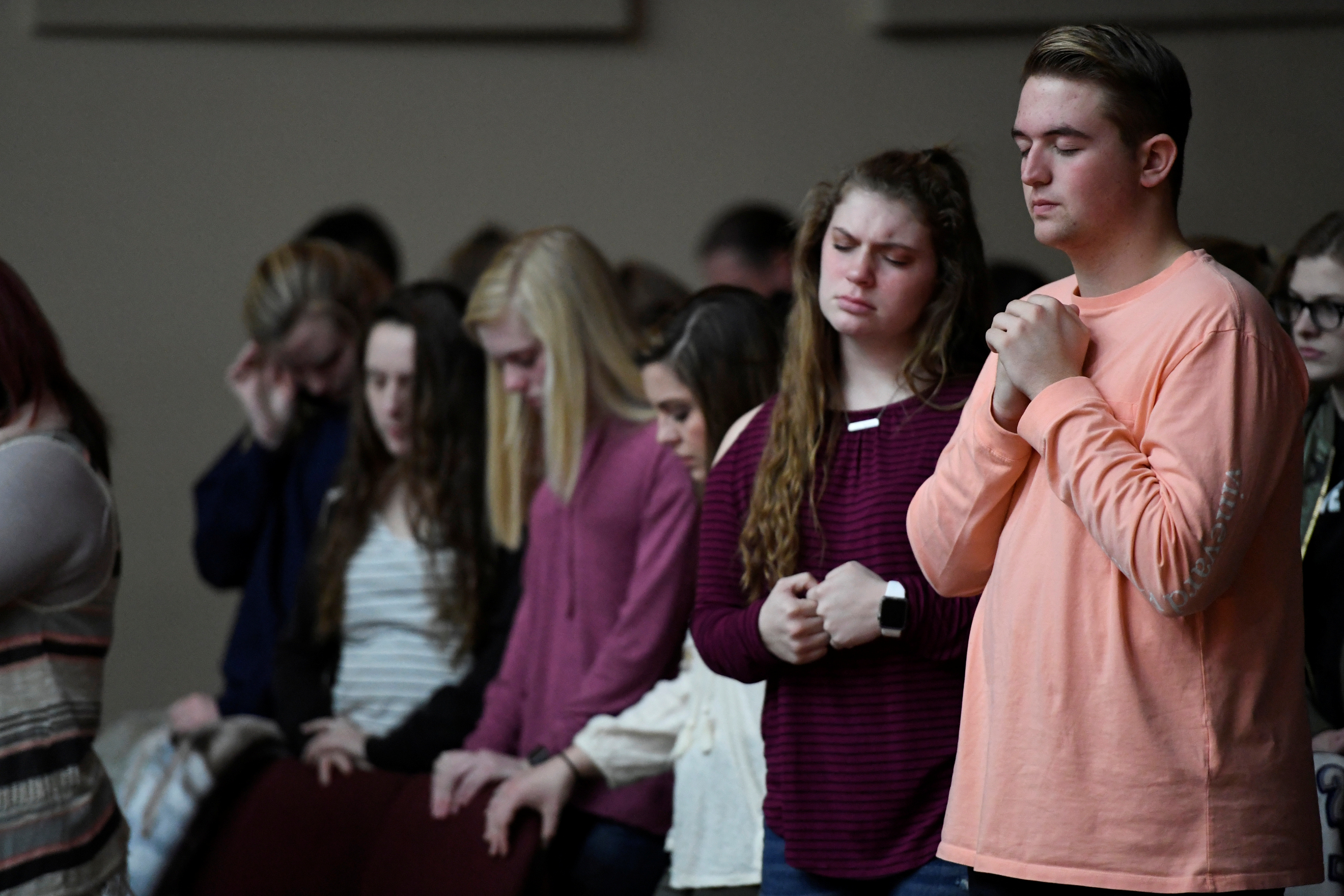 Students attend a prayer vigil Jan. 23 at a church in Marion, Ky., after a 15-year-old boy opened fire with a handgun that day at Marshall County High School. Cardinal Daniel N. DiNardo of Galveston-Houston, president of the U.S. Conference of Catholic Bishops, called for prayers for the victims killed and injured in a pair of school shootings in Kentucky and Italy High School in Texas Jan. 22. (CNS/Harrison McClary, Reuters)

Cardinal Daniel DiNardo of Galveston-Houston called for prayers for the victims killed and injured in a pair of school shootings in Kentucky and Texas.

In a statement released Jan. 23 after the second shooting in two days, DiNardo, president of the U.S. Conference of Catholic Bishops, said Christians experience the pain of the family and friends of the victims "as if it were our own."

"We pray for eternal rest for those who have died. Let us pray, too, for the families, teachers and friends who must now endure the suffering of losing those dearest to them," the cardinal said.

"We stand in solidarity with the children who face a long road of recover from serious injuries. May they find comfort in a loving community," he said.

He also called for people to reach out "in compassion to assist the grieving."

Police said a 15-year-old male student was arrested at Marshall County High School in Benton, Kentucky,  Jan. 23 after two people died and 18 were injured after a shooter opened fire before classes began.

The slain victims were a boy and a girl, both 15, state police said. The girl died at the scene and the boy died at a hospital.

A day earlier in Italy, Texas, police arrested a 16-year-old high school student in connection with a shooting that left a 15-year-old girl injured.

Police in the community about 50 miles south of Dallas, said the incident occurred in the Italy High School cafeteria. The girl was airlifted to a hospital in Dallas. Police did not release any other information about the incident.

In other reaction, Chicago Cardinal Blase Cupich said that "yet again, we are brought to our knees in prayer and pain as we consider the horrors of gun violence."

He noted that in both Texas and Kentucky, children were the victims, "struck down apparently by other children -- limitless potential cut short, families seized by grief." He offered prayers for the shooting victims at both schools and their families and for those shot "on the streets of our cities."

"We used to call these heinous acts 'unimaginable," the cardinal said in a Jan. 23 statement. "But we don't need to imagine them anymore, because they happen every single day in America. And why? ... Because we lack a health care system and culture that adequately support those who need psychological treatment."

He called it "all too easy" in the United States "to carry out mass shootings with high-powered artillery designed to kill human beings."

"Every day we fail to hold our elected officials accountable for our nation's weak gun-safety laws, we fail our children and condemn them to a life marked by violence that could have been prevented," Cupich said. "How many children have to die before we find the political will to do something about it?"