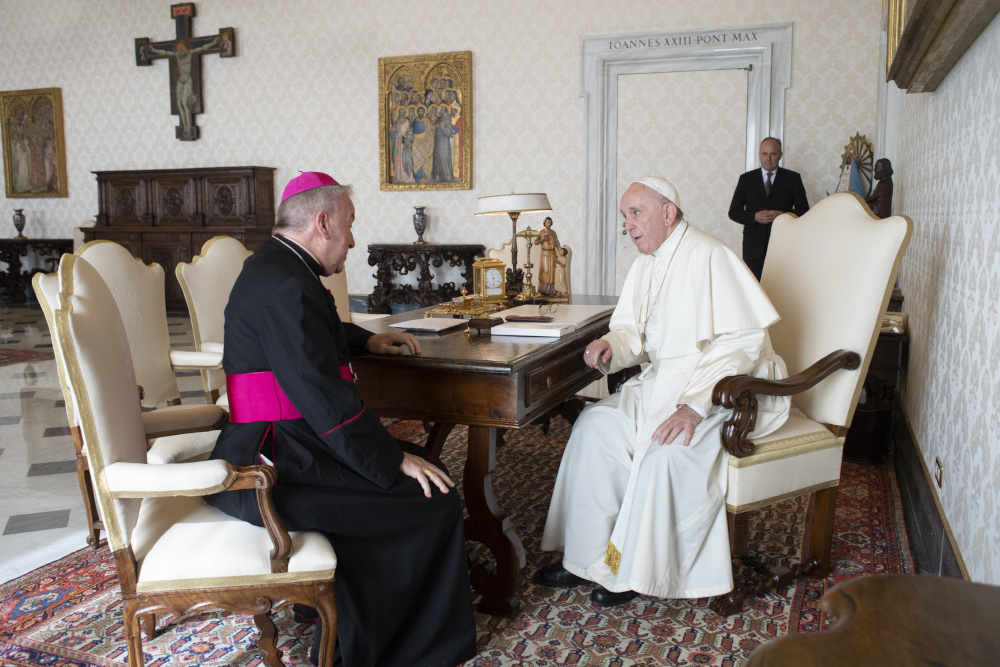 Archbishop Luigi Ventura, the Vatican nuncio to France, meets with Pope Francis at the Vatican in this file photo from Oct. 18, 2018. The apostolic nunciature in Ottawa, Ontario, confirmed Feb. 26 that it received a first complaint of sexual misconduct concerning Archbishop Ventura, the Vatican's ambassador to Canada from 2001 to 2009. (CNS/Vatican Media)

The apostolic nunciature in Ottawa, Ontario, confirmed Feb. 26 that it received a first complaint of sexual misconduct concerning Archbishop Luigi Ventura, the Vatican's ambassador to Canada from 2001 to 2009.

Ventura, now 74, is under investigation for similar allegations in France, where he has served as nuncio since 2009.

The alleged incident took place July 26, 2008, at the shrine of Sainte-Anne-de-Beaupre. Ventura was there for the feast of Ste. Anne, as the shrine was celebrating its 350th anniversary.

Christian Vachon, then 32, was part of the youth pastoral team. He told Presence info that, on that day, he was asked to help by providing service at the tables during a banquet. He alleged that Ventura touched his buttocks at least twice while he was serving him. He said he thought it was done inadvertently the first time, but that that there was no doubt after the second time.

He said the nuncio tried to engage in conversation with him, but he did not want to speak.

"During the meal, I was on edge. I was shocked. I was shocked by what he did. This is the complete opposite of the dignity that comes with its function. I was scandalized," he told Presence info, a French-language Canadian news service.

Vachon said he felt "depressed" during the afternoon.

He kept the story to himself, telling only his wife years later, until he saw a general question about sex abuse by priests on a forum last autumn. He shared his story anonymously in December, taking care not to mention Ventura.

After Vachon learned that Ventura was targeted by an investigation in France, he updated his testimony to reveal that he was speaking about him. Vachon said the #metoo movement and the allegations made public in France made him realize he should not "keep this information" to himself anymore.

He lodged a complaint with the nunciature in Ottawa Feb. 22, 2019, explaining he did not do it sooner because, for him, "it was the equivalent of complaining directly to (his) aggressor."

"I didn't go to the police, either, because it's a case of 'my word against his' typical of sex abuse crimes," he added.

Vachon told Presence info that Archbishop Luigi Bonazzi, the current nuncio, called him the same day he received the complaint to discuss it with him.

Bonazzi confirmed that these allegations are for the moment the "only" complaint received by the nunciature about Ventura. He also said that it has "been brought to the attention of the Holy See."

The French media revealed Feb. 15 that, since Jan. 24, the Paris-based nuncio has been under a preliminary investigation for sexual misconduct.

The Holy See's Press Office said in a statement they learned about the allegations in the media, and that they're "waiting for the results of the investigation" in France.