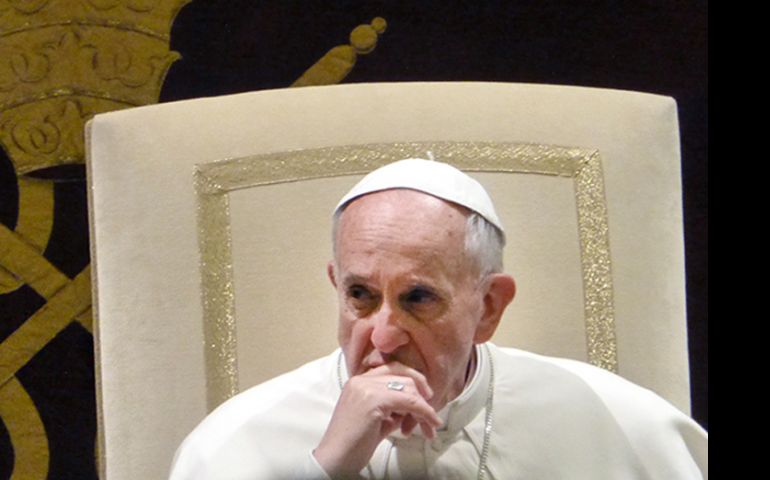 Pope Francis during a homily he delivered in Sibari, Italy, on June 21, 2014. (Creative Commons/Christoph Wagener)

Vatican City — The Vatican on Monday, Nov. 2, announced the arrest of two people in connection with the alleged theft of confidential documents, the first such case since the “Vatileaks” scandal saw the papal butler jailed for leaking Holy See secrets.

Spanish priest Lucio Angel Vallejo Balda was arrested over the weekend, along with Italian lay woman Francesca Chaouqui, following an investigation by the Vatican’s police force. Both had been part of a temporary commission established by Pope Francis in 2013 to advise the pontiff on how to overhaul the Holy See administration.

Chaouqui, 33, a public relations expert, was released on Monday after agreeing to cooperate with investigators, but Vallejo Balda remained in custody. Vallejo Balda, 54, was believed to be the highest-ranking member of the Vatican’s central bureaucracy, known as the Curia, ever to have been arrested, according to Reuters.

The Vatican did not detail the content of the stolen documents, although two books being released this month suggest they are related to Holy See finances and Francis’ administrative overhaul.

“Merchants in the Temple” by Gianluigi Nuzzi will be released in English, while Emiliano Fittipaldi’s “Avarice” will be published in Italian. Without referring to their titles, the Vatican on Monday described the books as “a serious betrayal of trust granted by the pope.”

“Publications of this kind do not contribute in any way to establish clarity and truth, but rather to create confusion and partial and tendentious interpretations. We must absolutely avoid the mistake of thinking that this is a way to help the mission of the pope,” the Vatican said.

Nuzzi’s previous book, “His Holiness,” was based on confidential documents leaked by the pontiff’s butler, Paolo Gabriele. The papal aide was subsequently jailed over the 2012 revelations, dubbed the “Vatileaks” scandal, although he was subsequently pardoned by Pope Benedict.

Less than two months after the pardon, Benedict resigned, prompting a historic conclave and the appointment of Francis. The current pope has pushed through a reform agenda touching upon everything from sexual abuse to finance, calling on a host of advisors.

Much of Vallejo Balda and Chaouqui’s work sought to revamp the Holy See’s murky financial system, which has come under criticism for failing to adhere to international banking standards. The body within which the duo worked, the Pontifical Commission for Reference on the Organization of the Economic-Administrative Structure of the Holy See, made a series of recommendations in 2014 to simplify financial management and commit to global standards.

As part of the reforms, Francis appointed Cardinal George Pell, previously archbishop of Sydney, to oversee economic changes at the Vatican.

'VatiLeaks': A foolish and embarrassing case