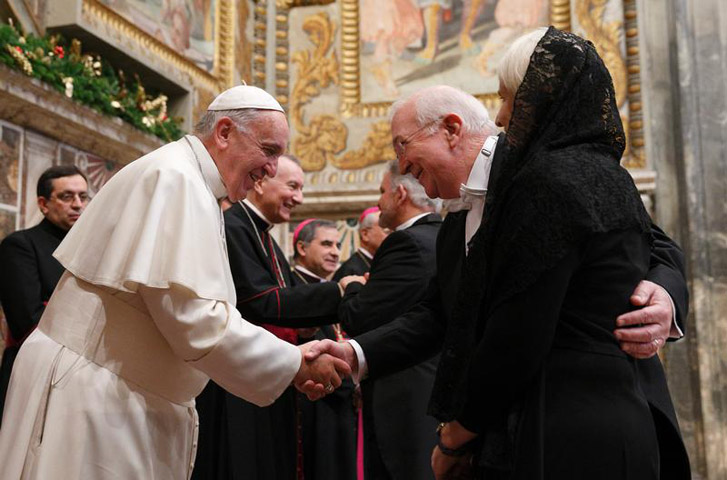 Pope Francis exchanges greetings with Ken Hackett, U.S. ambassador to the Holy See, and his wife, Joan, during a meeting with ambassadors to the Holy See at the Vatican Jan. 13,, 2014. (CNS photo/Paul Haring)

The U.S. ambassador to the Holy See believes Pope Francis is not traveling to the United States in September to scold anyone, but to challenge the country's people to live up to their ideals.

"I don't think he's coming to the United States to antagonize, to criticize, to call out people," Ken Hackett, the ambassador, told Catholic News Service Aug. 4. "I think he's coming to shore up. But he won't hesitate from speaking out about some of the issues he feels passionately about."

Poverty, immigration, climate change, inclusion and respect for human dignity and human life are regularly on the pope's agenda, he said, and they could be on the nation's political agenda as it gears up for the 2016 presidential primaries, which begin five months after Pope Francis visits.

By raising those issues, the pope will "kind of drop them into the political discussion," the ambassador said. "You can't ignore them any longer."

The timing of the pope's visit to the United States, Sept. 22-27, is "kind of serendipitous, but you use serendipity where you can," Hackett said. "Pope Francis can raise issues that Americans would like raised with our political candidates."

Asked what issues he thinks Francis will challenge Americans on, the ambassador replied, "You can hope and you can speculate. I am a person of hope, but I'm paid to speculate.

"So I believe that what he has already said in terms of changing our lifestyle so that we can live in different ways, in ways that are more harmonious with our environment, that we can engage in a deeper sense of solidarity and compassion with those who have less -- I think he'll challenge us to step up in that way," he said.

"We're a nation of great accomplishments, of people of imagination and compassion. I believe Pope Francis will call Americans to that greatness," Hackett said. "He will push us to do even more."

Both St. John Paul II and Pope Benedict XVI spoke strongly against legalized abortion when they visited the United States. It is an issue of grave concern to the Catholic Church and one that became a topic of serious debate in late July and early August after the release of videos showing Planned Parenthood officials discussing the use and sale of fetal tissues from abortions.

While Pope Francis does not shy away from condemning abortion -- "he doesn't muddle over it at all" -- the ambassador said he is not certain the pope will address abortion in the same way as his predecessors did while visiting the United States.

A recent Gallup survey showed Francis' popularity declining among Americans, but Hackett is convinced it is not of any importance to the pope.

"I bet he has not read the survey and it just doesn't matter. In my two years of reasonably close watching of Pope Francis, that's not where he is -- surveys. He speaks from his heart and he speaks with thought about things he believes passionately on, whether it's politically acceptable or not."

"Pope Francis walks the walk and talks the talk," Hackett said. "He is everything that you would expect a pope to be: He is deeply prayerful; deeply thoughtful; he is engaged on world issues, but always from the point of view of the least of us. I think Americans and people worldwide recognize that."

Lower approval ratings or not, the ambassador believes that "when Americans see Pope Francis reaching out behind the Secret Service guys to embrace the child, the elderly -- they will love him even more."

Asked whether the Secret Service would feel the same, the ambassador said a long process of careful planning has gone into the pope's visit. "Our Secret Service apparatus is the best in the world. They have been planning for this visit for a long time, and I think they are ready for Pope Francis."

Francis will leave the Vatican Sept. 19, spending three days in Cuba before flying to the United States. U.S. President Barack Obama and Cuban President Raul Castro have credited Pope Francis and the Vatican with helping them ease tensions and move toward the restoration of normal relations.

The pope's decision to fly to Cuba before going on to Washington is a decision the Obama administration has welcomed, Hackett said. "I think it can be a moment of healing, a moment where he can call attention to the good things that are happening and maybe call out some of the things that need to be improved."

In a 1998 booklet of reflections on the speeches and homilies St. John Paul made during his historic visit to Cuba a few months earlier, the pope -- then-Archbishop Jorge Mario Bergoglio of Buenos Aires -- argued that a sincere and honest dialogue would benefit both the U.S. and Cuba.

At the same time, Bergoglio argued for the full freedom of the Catholic Church in Cuba to preach the Gospel and minister to the poor, and he denounced ideological systems that offend the transcendent dignity of the human person.