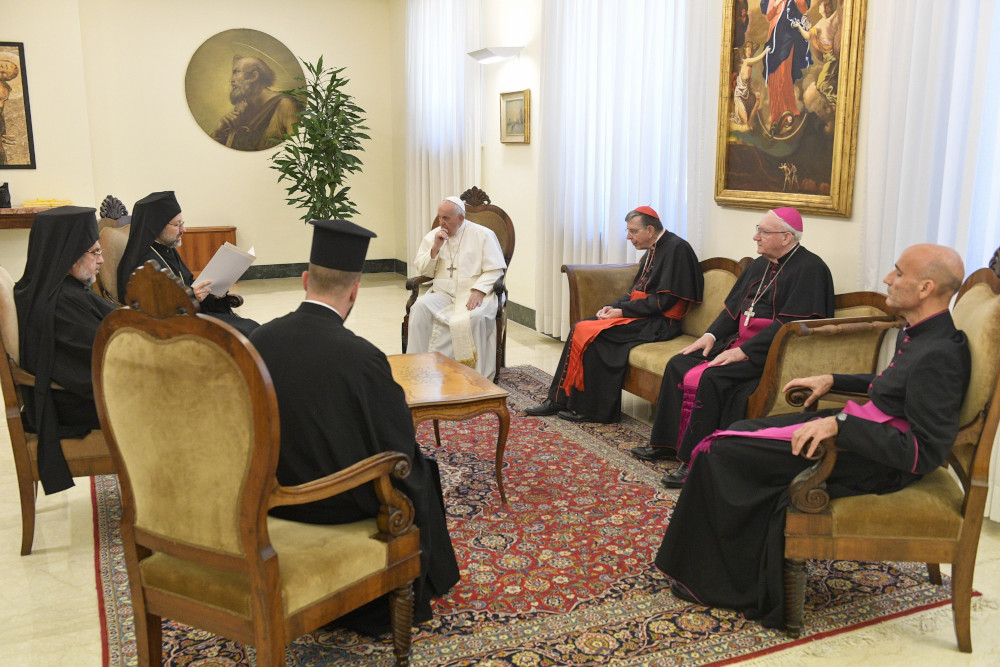 Now more than ever, divided Christians must reconcile with each other and become signs of peace in a time of war, Pope Francis said.

Meeting with a delegation from the Orthodox Ecumenical Patriarchate of Constantinople June 30, the pope said that as war continues to rage in Ukraine, it is a time not for "talking and discussing, but for weeping, for helping others and for experiencing conversion ourselves."

"Reconciliation among separated Christians, as a means of contributing to peace between peoples in conflict is a most timely consideration these days, as our world is disrupted by a cruel and senseless war of aggression in which many, many Christians are fighting one another," he said.

Continuing a long-standing tradition, the delegation, led by Orthodox Archbishop Job of Telmessos, was in Rome to participate in the celebration of the feast of Sts. Peter and Paul.

In turn, a delegation from the Vatican travels to Istanbul every year in November to commemorate the Orthodox feast of St. Andrew the Apostle.

In his address, the pope said the presence of the delegation at the June 29 Mass in St. Peter's Basilica "was a source of great joy for me and for all present," as well as a visible reminder of "the closeness and fraternal charity of the church of Constantinople toward the church of Rome."

The exchange of delegations each year, he added, serves as "a tangible sign that the days of distance and indifference, when our divisions were considered irreparable, is long past."

Recalling the words of the late Ecumenical Patriarch Athenagoras, the pope said that as "sister churches, brother peoples," Orthodox Christians and Catholics must unite in answering the call to help those suffering in war.

Francis subtly alluded to support by leaders of the Russian Orthodox Church for Russia's war on Ukraine.

"We also need to experience conversion and to recognize that armed conquest, expansionism and imperialism have nothing to do with the kingdom that Jesus proclaimed," the pope said.

It has "nothing to do with the risen Lord, who in Gethsemane told his disciples to reject violence, to put the sword back in its place, since those who live by the sword will die by the sword, and who, cutting short every objection, simply said: 'Enough!'" he said.

The long-sought goal of Christian unity, he continued, can become a reality when both churches exemplify "a more fraternal humanity" and follow Jesus' call "to be merciful and never violent, to be perfect as the Father is perfect, and not be conformed to the world."

Francis expressed his hope that the continuing theological dialogue between the Catholic and Orthodox Church will help to promote "a new mentality" that can help both sides "look together to the present and future, without letting ourselves be trapped in the prejudices of the past."

"Let us not be content with an 'ecclesiastical diplomacy' that would allow us to politely maintain our own points of view, but instead journey together as brothers and sisters," the pope said.