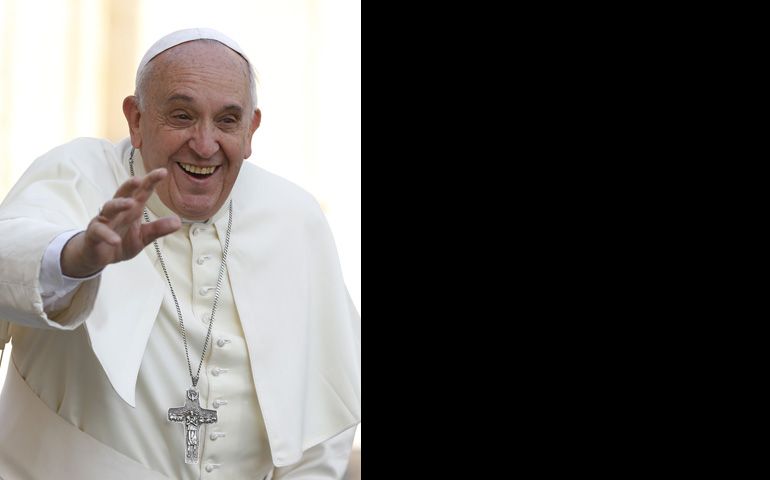 Pope Francis waves as he arrives to lead his general audience Wednesday in St. Peter's Square at the Vatican. (CNS/Paul Haring)

Vatican City — Pope Francis is tipped to win this year's Nobel Peace Prize, according to some of the world's leading bookmakers.

The Argentine pope is currently the 5-2 favorite to win the award, which the Nobel Institute in Oslo, Norway, will announce Friday, according to British bookmaker William Hill. Irish bookmaker Paddy Power also considers him a leading contender.

The pontiff's odds have fallen from 11-4 in a sign of his worldwide popularity.

"When the odds get shorter, that's when you sit up and pay attention," said Jon Ivan-Duke, spokesman for William Hill. "Maybe there's some divine inspiration at work."

"Snowden has created as many fans as critics and would be a rather controversial choice," Ivan-Duke said.

But the pope is also facing a late challenge from Malala Yousafzai, the Pakistani who survived a near-fatal shooting by the Taliban on her way to school in 2012.

When the brutal attack provoked an international outcry, Islamic clerics in Pakistan issued a fatwa against her attackers, but the Taliban reaffirmed its intent to kill Yousafzai as she recovered in the U.K.

Now a human rights activist, Yousafzai has seen her odds halved from 20-1 to 10-1 but the pope is still ahead of her.

"The betting suggests Pope Francis is in pole position to win the Nobel Peace Prize -- he's the hot ticket," Ivan-Duke said. "However, there's a late gamble on last year's favorite, Yousafzai, and she could be a real challenger to the Holy Father."

Since he was elected in March 2013, the Jesuit pontiff has called for peace in areas of conflict including Iraq, Syria and Ukraine.

The 77-year-old was also outspoken on his visit to the Middle East this year calling for an end to the conflict between the Israelis and the Palestinians and praying beside the controversial concrete wall that separates Jerusalem from Bethlehem.

In June, he hosted a high-level prayer summit between Israeli President Shimon Peres and Palestinian President Mahmoud Abbas, and pressed Israeli President Benjamin Netanyahu to scale back attacks during this summer's bloody conflict in Gaza.