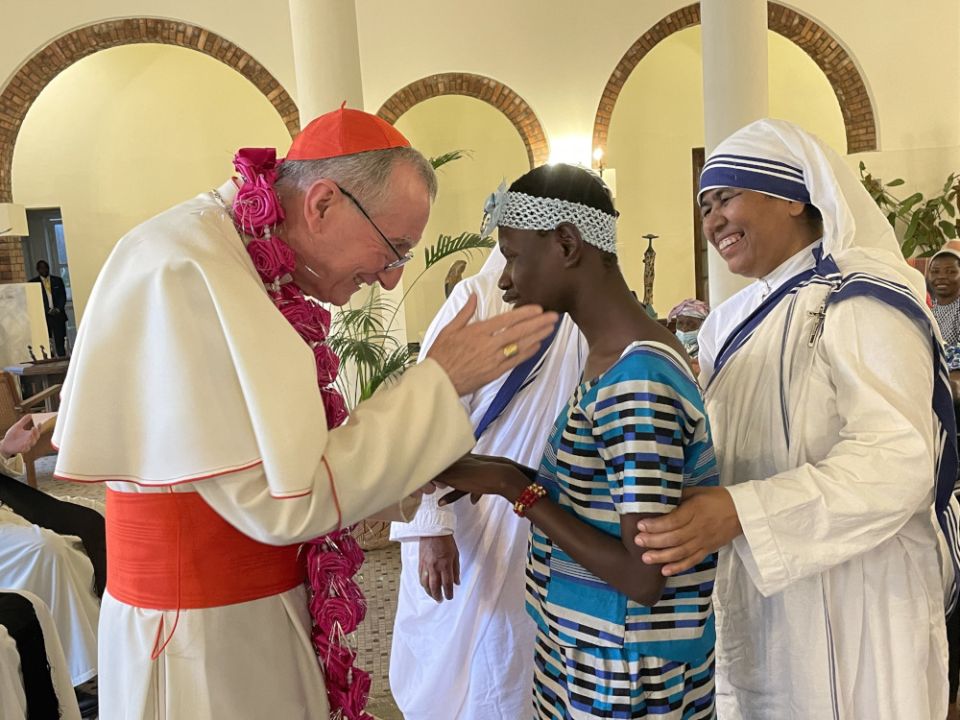 Vatican City — While many people were disappointed that Pope Francis was unable to make his long-awaited visit to Congo and South Sudan, Cardinal Pietro Parolin assured the people that the pope had not given up on visiting them.

"I did not come on my own behalf but rather to bring you Pope Francis' affection," the Vatican secretary of state told Catholics at a parish in Juba, South Sudan, July 7.

"I come, like John the Baptist, to prepare his arrival. The pope wants to come to South Sudan, he is planning a trip to Juba but the visit is intended for the whole country, to meet all the people," he said, according to Vatican News.

The Vatican press office had announced June 10 that the pope's visit to Congo and his ecumenical pilgrimage to South Sudan were postponed because the pope continued to have problems with his knee.

Addressing pilgrims gathered in St. Peter's Square June 12, the pope said he felt "great sorrow for having had to postpone this trip, which means so much to me."

"I apologize for this," he said. "Let us pray together that, with the help of God and medical attention, I will be able to be with you as soon as possible. Let us be hopeful!"

However, the pope asked Parolin to visit the two countries July 1-8 "in order to show his closeness to the beloved peoples of the Congo and South Sudan."

In an interview with Vatican News published July 1, the Vatican secretary of state said he met with the pope who "told me that he was very happy about me going to represent him."

Pope Francis, he said, knew that "after the disappointment of the announcement that he was unable to travel," the people in Congo and South Sudan still had "a great sense of anticipation and intense prayer for his health."

"The pope confirmed that I was the bearer of his affection, his message and his desire to travel personally as he had initially planned," the cardinal told Vatican News.

After meeting with Congolese government authorities as well as U.N. representatives in Kinshasa, Parolin celebrated Mass with the country's Catholics July 3.

In his homily, he urged Catholics to not give up hope and to not fall into the temptation of "giving up in the face of reality."

"God calls us to look to the future: together, united, overcoming any spirit of partiality, any division of group, of ethnicity, of belonging," Parolin said.

"It was a beautiful and intense moment, and I believe that it was positive, especially for them. The first impressions were that the visit was to bring the presence and the affection of the pope. And I hope this happens as well in South Sudan," he said.

Arriving in Juba, South Sudan's capital, the cardinal was welcomed by a throng of well-wishers, some dressed in brightly colored traditional clothing and ululating with joy as he waved from the airport tarmac.

"It is a great joy for me to be here for a few days to celebrate, to pray, to meet people in the name of the Holy Father who always carries you in his heart; he is very concerned with peace and reconciliation in South Sudan and follows the good developments that are taking place," he said.

South Sudan became independent from Sudan in 2011 after decades of war. But, just two years after independence, political tensions erupted into violence. The Vatican hosted a spiritual retreat in April 2019 with the leaders of all the warring political factions and clans.

At the end of the retreat, the pope knelt and kissed the feet of the leaders of South Sudan, begging them to "remain in peace" and to "not be afraid" despite the many problems.

Meeting with Parolin at the presidential palace in Juba July 6, South Sudanese President Salva Kiir said that upon returning from Rome after that retreat, "we didn't fight anymore."

"I said 'no' to new wars. The people perhaps have not seen developments, but they have heard the silence of weapons," Kiir told Cardinal Parolin, according to Vatican News.

"We do not allow anyone to start a war. I don't want to fight anymore; now we want peace in the country," he added.

The highlight of the cardinal's visit to South Sudan was a visit to a U.N.-run camp for displaced people in Bentiu, where he was warmly welcomed by thousands of its residents with singing and dancing.

Parolin told Vatican News he was "struck by everyone, especially the children, who were always smiling."

"It was a beautiful, touching experience as well as a dramatic experience seeing the conditions in which these people live," he said. "We are in the periphery of the peripheries because these people would not even have the bare minimum to survive had it not been for the presence of the international community through the United Nations."

Seeing the living conditions of the camps' residents, he added, "hit me like a punch in the stomach."

"I know Africa, in the sense that I began my work in Africa," he explained. "But today truly was a very strong experience because I had never been in a refugee camp like this one so this impacted me terribly."

In his homily, Parolin offered a word of encouragement to the people "in this difficult land that is loved by God" and urged them to not give up hope amid trials and suffering."

"Our history makes us cry out to the Lord, makes us lay before his altar the injustices, the abuses, the persecutions that too many of us still suffer," the cardinal said.

"But we know that this cry is heard by God and redeemed, a cry that he himself will turn into a song of joy, if we know how to ask forgiveness for our persecutors and pray for those who hurt us," he said.

Pope urges G-20 focus on helping the poor, says 'lives are at stake'