Editor of Vatican paper comes out swinging on crisis 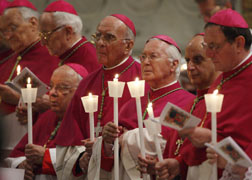 On the same day the Vatican published a "layman's guide" to procedures when a priest is accused of sexual abuse -- which, for the first time in a Vatican document, explicitly includes a directive to comply with civil laws requiring bishops to report abuse to the police -- the editor of the Vatican newspaper, L'Osservatore Romano, dropped by Rome's Foreign Press Club to talk about the crisis that has engulfed Pope Benedict XVI in recent weeks.

Gian Maria Vian, a lay professor of history tapped to take over L'Osservatore Romano in October 2007, offered a robust defense of both the church and the pope. Vian generally kept his cool, though at one point he became testy in complaining that the media reads the crisis into everything said or done at the Vatican these days – a reflection, perhaps, of the intense pressure of the last few weeks.

Vian conceded that there were "great failures in governance" that made the crisis possible, but also insisted that the church now has an "exemplary" approach to the problem of sexual abuse of children, and blamed what he called a "media campaign" for tarnishing the pope's image.

"Honestly, the Holy See is doing everything possible to resolve this horrible scandal," Vian said.

Vian stressed that he was speaking in titolo personale, meaning that he was offering simply his own thoughts and was not speaking in any official capacity on behalf of the pope or anyone else. It was a no-holds-barred session, which began with Vian fielding a seemingly obvious question: Does the Vatican have a communications problem?

"It's an interesting question," Vian said in reply. "First of all, let's be clear – everyone has a communications problem."

Vian said he doesn't believe in a "plot" against the pope – he actually called talk of a plot "ridiculous" – but said he does see a "media campaign" designed to tarnish his image. He offered the example of Benedict's decision one year ago to lift the excommunications of four traditionalist bishops, including one who has minimized the Holocaust. That move was often presented as a "roll-back" on the reforming vision of the Second Vatican Council (1962-65), but Vian insisted that's not what the pope had in mind.

"It was a gesture of mercy that would have been supported by all his predecessors, meaning John XXIII, Paul VI, and John Paul II," Vian said.

Vian noted that Benedict released the decision on January 24, the fiftieth anniversary of John XXIII's announcement of the council. As someone who participated in Vatican II and who cherishes the council, Vian argued, Benedict XVI feels compelled to try to heal the only formal schism that followed it.

Vian also argued that part of the Vatican's "communications problem" is created by trends in the modern media. He pointed to the decline of traditional media, the speed at which reporting and analysis today happens, and the "aggressive" character of the blogosphere, "with everyone on one side or the other" – which, Vian said, influences the way news is presented.

Vian argued that the quality of reporting on religion in the mainstream media has gone down across the board. He offered the example that some media outlets have described Pope John Paul II's 2001 document assigning the Congregation for the Doctrine of the Faith juridical responsibility for the sex abuse crisis, Sacramentorum Sanctitatis Tutela, and then-Cardinal Joseph Ratzinger's letter informing bishops of the need to send their cases to Rome, as "secret."

In fact, Vian said, both documents were published in the Acta Apostolicae Sedis, the official gazette of the Holy See. The fact that many reporters don't know that is less an index of Vatican secrecy, he suggested, than media ignorance.

In response to a question about whether Vatican communications need to be better coordinated, Vian noted the irony that once upon a time, people complained that L'Osservatore Romano was a Catholic version of Pravda – hyper-coordinated by fidelity to party orthodoxy. Now, he said, people complain that the paper, and the Vatican generally, are too loosey-goosey.

Vian insisted that the Vatican's response to the recent crisis has been "much more rapid and complete" than normal.

In response to suggestions that Benedict XVI is increasingly isolated, Vian insisted that the pope is not "surrounded by snakes."

"Certainly, there are different sensibilities and so on," Vian said, "but the Curia is with the pope. There aren't any unfaithful servants."

Vian also asserted that Pope Benedict is "always very well informed" about what's being reported in the press, saying that he's not dependent simply upon the daily press digest prepared by the Vatican's Secretariat of State, but that he also reads newspapers directly and is briefed by his top aides.

"Nothing is hidden from the pope," Vian said.

Vian demurred when asked if the present crisis was the greatest to fact the church since the loss of the Papal States in 1870, arguing that people tend to forget the enormous criticism of Pope Paul VI after his birth control encyclical Humanae Vitae in 1968 and the steady drumbeat of resistance to John Paul II in the 1980s.

Vian cited statistics from the United States to the effect that there were only ten new credible accusations of sexual abuse against Catholic priests in 2009, suggesting that by now the problem has "all but disappeared" in the church. He linked that development to John Paul's 2001 motu proprio, suggesting that the more aggressive stance taken by church authorities since 2001 is working.

I asked Vian about recent statements from senior Vatican personnel, including Fr. Rainero Cantalamessa, the preacher of the papal household, who on Good Friday compared the attacks on Benedict XVI to anti-Semitism, and Cardinal Angelo Sodano, dean of the College of Cardinals, who on Easter Sunday rejected "petty gossip" about the pope. Setting aside the substance of those remarks, I asked, is Vian concerned that they're not helpful at a PR level – that they reinforce impressions of the church as defensive, closed, and in denial?

"It's possible," he said. "If someone is not well-disposed, they could read it that way."

Vian defended Cantalasmessa, noting his long history of commitment to Jewish/Christian dialogue, and Sodano, saying that as dean of the College of Cardinals, his lone concern was to express solidarity with the pope. At the same time, Vian suggested it's legitimate to ask whether the comments had been "prudent."

"Prudence is a cardinal virtue," he said. "Maybe it would have been more prudent not to say it."

It was nonetheless at this point that Vian became animated, loudly insisting that Sodano's reference to "petty gossip" was actually a quotation from a recent papal homily that had nothing to do with the sexual abuse crisis.

"The pope can talk about Adam and Eve and original sin, and nobody cares," Vian said, who became visibly frustrated. "Reading the abuse crisis into absolutely everything anyone says is ridiculous."

A few other notes from Vian:

Vatican | Editor of Vatican paper comes out swinging on crisis