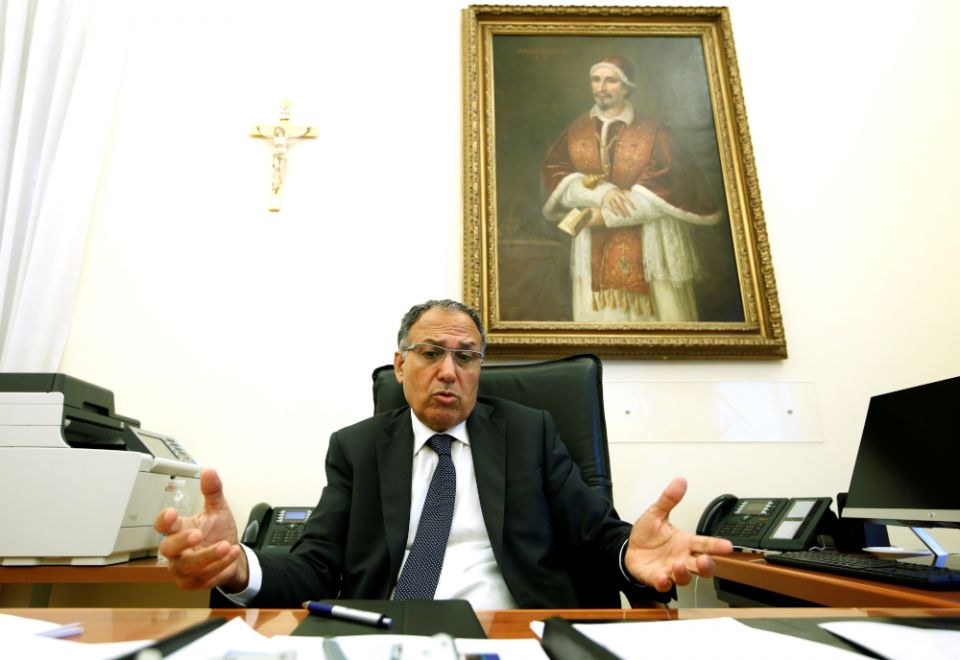 Carmelo Barbagallo, president of the Vatican's Financial Information Authority, gestures during a July 2, 2020, interview in Vatican City ahead of the release of the authority's annual report. (CNS/Reuters/Remo Casilli)

Vatican City — The Vatican's financial watchdog agency has expanded its reach of cooperation, and it plans on continuing to increase its staff to better fulfill its mandate.

Charged with preventing and countering suspected money laundering and the financing of terrorism, the Vatican Financial Intelligence Authority's work has significantly increased since it signed a number of agreements recently regarding the supervision of nearly 100 nonprofit entities and public authorities of the Holy See and Vatican City State.

With a new president, director and deputy director leading the authority, the watchdog agency was also going to establish a new statue and its "first internal regulation, which sets out detailed procedures in the furtherance of a healthy and transparent administration," wrote Carmelo Barbagallo, president of the Financial Intelligence Authority, known by its Italian acronym as AIF. It released its annual report July 3.

All the changes were part of helping the Holy See's "commitment to the fairness and transparency of its financial transitions," he added.

While AIF already cooperates with a number of international and Vatican authorities, it signed key memoranda of understanding the past six months with: the Secretariat of State and the Secretariat for the Economy "concerning the supervision and monitoring of nonprofit entities" and for public authorities; the Vatican's prosecutor's office, called the Promoter of Justice — and police force, known as the gendarmes, "concerning the exchange of information for intelligence purposes"; and the general auditor, concerning existing collaboration and the exchange of information, Barbagallo wrote.

The Egmont Group, an umbrella association of 164 financial intelligence units worldwide, had suspended the Financial Information Authority from its international information circuit in November after Vatican police raided and seized information from the offices of AIF. The AIF was reinstated in January after it could guarantee accepted standards would be followed in handling confidential information by authorities; that guarantee was part of the memorandum of understanding with the Vatican's Promoter of Justice, the president wrote.

Collaboration and exchange of information are "a fundamental prerequisite and guarantee for preventing and combating illegal activities as well as for promoting transparency and integrity in financial activities," the report said.

The AIF report said the agency received 64 reports of suspicious financial activity in 2019 compared to 54 reports in 2018 and 150 reports in 2017. Vatican law requires the reporting of suspected funds or activities to the AIF.

It forwarded 15 reports of possible criminal activity to the office of the promoter of justice at the Vatican City State's tribunal. The majority of potential crimes, the report said, involve foreign subjects or jurisdictions and potentially deal with international tax fraud and embezzlement, it said.

AIF suspended three bank transactions worth more than a quarter of a millions dollars and froze one bank account holding nearly $200,000 in 2019. The authority monitors financial operations at the Vatican bank, formally known as the Institute for the Works of Religion (IOR), to ensure they meet international norms against money laundering and the financing of terrorism.

It said experts from Moneyval — the Council of Europe's Committee of Experts on the Evaluation of Anti-Money Laundering Measures and the Financing of Terrorism — would also be conducting an onsite inspection of the Holy See and Vatican City State in September after it was postponed from April due to the pandemic.

The report said the AIF would be changing its name to the Supervisory and Financial Information Authority to better reflect its two roles as a supervisory and regulatory body, and a financial intelligence unit.

Pope Benedict XVI established the agency in 2010 to monitor Vatican financial operations and ensure they met international norms against money laundering and the financing of terrorism.