by Joshua J. McElwee
Vatican
World
This article appears in the Francis in Bulgaria and North Macedonia feature series. View the full series. 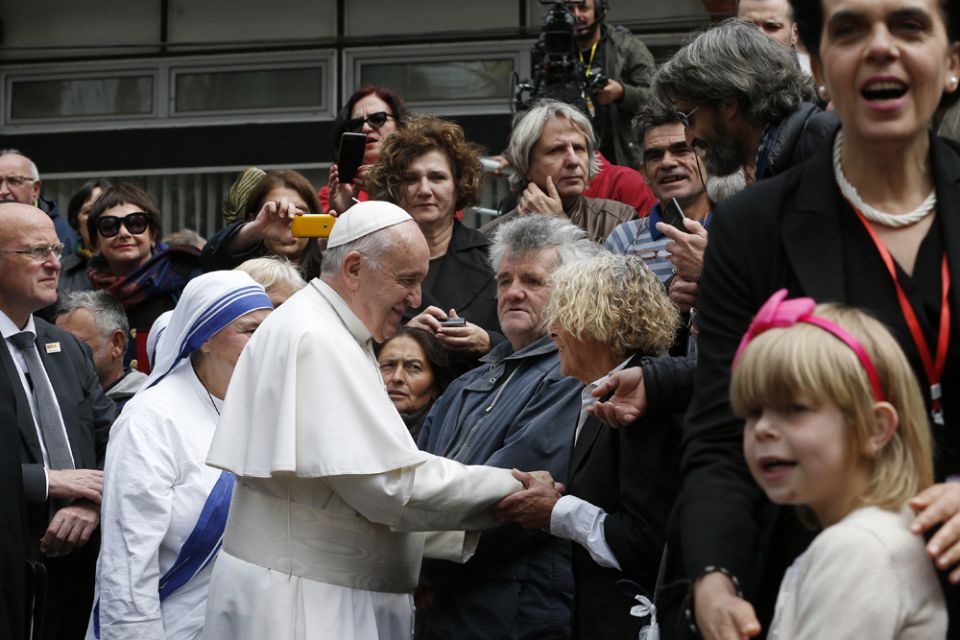 Pope Francis greets people May 7 as he visits the Mother Teresa Memorial for a meeting with religious leaders and the poor in Skopje, North Macedonia. (CNS/Paul Haring)

Editor's note: This story was updated at 9:30 a.m. Central time with details from Pope Francis' meeting with interreligious young people in North Macedonia.

SKOPJE, NORTH MACEDONIA — Pope Francis became the first Catholic pope to visit North Macedonia May 7, in a trip meant to encourage the small Balkan nation as it seeks to end a decadeslong dispute with Greece in order to join the European Union.

In a meeting with politicians shortly after landing in Skopje, the capital, the pope praised both the country's atmosphere of harmony between Eastern Orthodox Christian and Muslim populations and its care in recent years for refugees fleeing violence in the Middle East.

Francis particularly emphasized the care for refugees, saying North Macedonia's "generous efforts" in helping those in need had distinguished the country.

"The ready solidarity offered to those in such great need … does you honor," he said. "It says something about the soul of this people that, having itself experienced great privations, you recognize in solidarity and in the sharing of goods the route to all authentic development."

Francis is visiting North Macedonia, which is located north of Greece and south of Kosovo, for about 10 hours May 7, as he heads back to Rome after an earlier two-day visit to eastern neighbor Bulgaria.

He has come to the country at a delicate time, two days after a presidential runoff election that inflamed tensions over a February decision to change the nation's name.

Greece had long protested the previous name of Macedonia, citing the Greek region also referred to by that identifier, and had blocked Macedonia's entry into NATO and the European Union because of the issue.

Stevo Pendarovski, who favors the name change, won the May 5 runoff with 51.7 percent of the vote.

While Francis did not refer specifically to the change in his speech at the presidential palace in Skopje, he mentioned the country's desire "for increased integration with the nations of Europe."

Outgoing North Macedonian President Gjorge Ivanov, who has been critical of the name change, was blunter in his speech welcoming Francis. He said his society is "deeply divided" and "heavily wounded by broken promises, unfulfilled expectations and faltering trust in the international community." 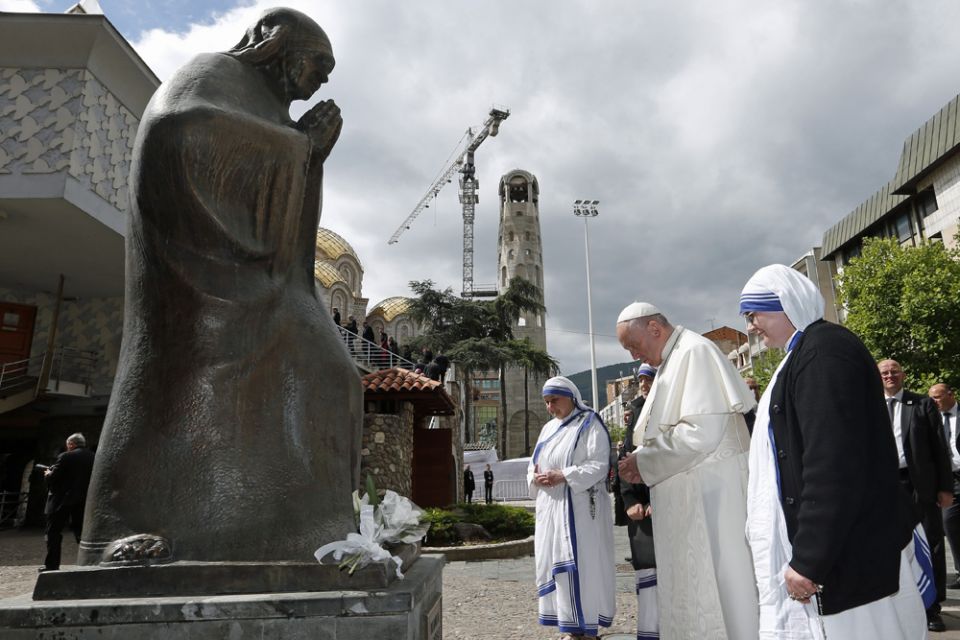 Pope Francis and Missionaries of Charity nuns pray in front of a statue of Mother Teresa at the Mother Teresa Memorial May 7 during a meeting with religious leaders and the poor in Skopje, North Macedonia. (CNS/Paul Haring)

Francis was welcomed by small crowds upon landing in North Macedonia, which the Vatican estimates to have a population of only 15,000 Catholics. About 70 percent of the population identifies as Eastern Orthodox; nearly 30 percent are Muslim.

After his meeting with Ivanov and the other political leaders, Francis visited a memorial to one of Skopje's most famous citizens, Mother Teresa, who was born in the city as Anjezë Gonxhe Bojaxhiu in 1910.

Offering a prayer at the memorial, which was built over the site of the church where the future saint was baptized, Francis praised Teresa's efforts to help those in need and asked that God would "grant us the grace to become signs of love and hope in our own day."

The prayer at the memorial was marked by an ecumenical oddity. Attending the event was Primate Stephen, the head of the country's main Orthodox community, which is considered by other Orthodox churches to be in a state of schism.

The Macedonian Orthodox, who count some two million members, have been formally separated from other Orthodox communities since they unilaterally declared themselves independent from the Serbian Orthodox Church in 1967. No other Orthodox church has recognized the declaration.

Although Stephen was present for the prayer at the memorial, there was no formal meeting between him and Francis. Also attending the event were some of Mother Teresa's cousins.

Later in the day, Francis celebrated a Mass in Skopje's central square, which local organizers said was attended by about 15,000 people.

The pope also held an ecumenical and interreligious meeting with young people, during which he called on them to be like Mother Teresa, to "work with your hands, to take life seriously and make something beautiful of it."

Christians' first mission is to witness that God is love, pope says

When I met Mother Teresa

Saint of darkness: the path to canonizing Mother Teresa

How do you get Mother Teresa to stop praying?