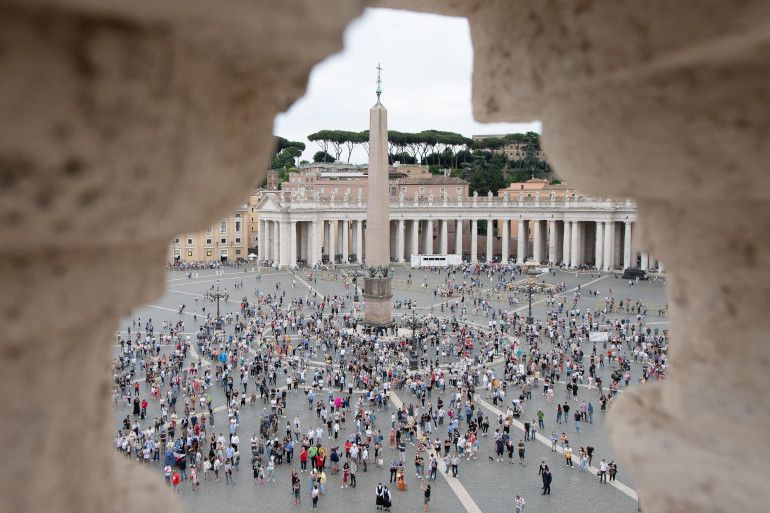 People in St. Peter's Square attend the Angelus led by Pope Francis from the window of his studio overlooking the square at the Vatican June 6, 2021. (CNS photo/Vatican Media)

Rome — Pope Francis has asked Chicago Cardinal Blase Cupich to conduct an investigation of the Vatican office that coordinates the Catholic Church's efforts on peace and justice issues, in the latest in a series of such inquiries of Vatican departments.

Cupich will lead what is formally known as an apostolic visitation of the Dicastery for Promoting Integral Human Development, which is led by Ghanaian Cardinal Peter Turkson.

In a June 24 release, the Vatican press office said the inquiry "is taking place in the context of a normal examination of the activity of the [Vatican] dicasteries, aimed at obtaining an updated understanding on the conditions in which they operate."

Francis has ordered similar investigations in recent weeks of both the Vatican's Congregation for Divine Worship and the Discipline of the Sacraments and the Congregation for Clergy. The Vatican has not offered much comment on the inquiries, but they appear to be oriented on helping the departments function more effectively.

Francis has also been working for seven years with his advisory Council of Cardinals on a new overall structure for the Vatican's bureaucracy, which has yet to be finalized.

Archbishop Arthur Roche, the new head of the worship congregation, has compared the visitation of his dicastery to the consultations a bishop might undertake to better understand the needs of a certain parish in his diocese.

Cupich did not immediately respond to a request for comment about the investigation. The cardinal could conceivably undertake the visitation during one of his usual visits to Rome, or from afar.

The Dicastery continues to house the office that directs the Vatican's work on migrant and refugee issues, which is led by Canadian Cardinal Michael Czerny, and the Vatican's commission on the COVID-19 pandemic.

Report on U.S. ordinariate for ex-Anglicans