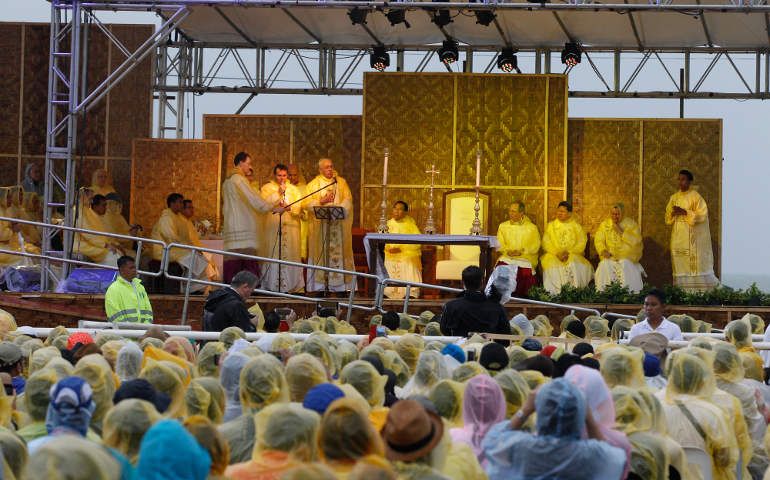 Pope Francis celebrates Mass adjacent to the airport in Tacloban, Philippines, Jan. 17. Celebrants, including the pope, wore plastic ponchos to protect themselves from a tropical downpour. (CNS/Paul Haring)
This article appears in the Francis in the Philippines feature series. View the full series.

Manila, Philippines — Braving pouring rain and 60-mile an hour winds to stand with those most affected by a typhoon that left thousands dead and millions homeless, Pope Francis said Saturday he did not know what he could say to address their pain.

"I don't know what to say to you," said the pontiff in a strikingly heartfelt and personal homily at a Mass in Tacloban, an area some 500 miles southeast of the Philippines capital that was struck hardest by 2013's Typhoon Haiyan.

"Many of you lost part of your families," the pope continued, setting aside his prepared English text for the occasion to speak in his native Spanish. "All I can do is keep silence. And I walk with you all with my silent heart."

Francis was speaking Saturday in dramatic conditions in Tacloban, which is enduring another weather event -- a signal two tropical storm that is releasing 3/4 of an inch of rain per hour. Traveling from Manila Saturday morning, there were concerns that that the Mass might have to be canceled or that the pope's plane might not even be able to fly into the area.

But Francis told the some million people at the Mass -- many of whom had waited for the pope for hours outside with no cover from the rain -- that as he watched the catastrophe unfold from Rome 14 months ago, "I felt that I had to be here."

One of the strongest typhoons in history, Haiyan killed more than 6,000 people and caused almost $3 billion in damage. In the storm's wake, 90 percent of the structures in Tacloban were destroyed. Some 1.9 million people were left homeless and another 6 million displaced.

Evincing the pain of those who suffered so much from the event, Francis he had come to Tacloban "to tell you that Jesus is Lord" and that he "never lets us down."

"Father, you might say to me, 'I was let down because I've lost so many things, my house, my livelihood; I have illness,'" said Francis.

"It's true if you would say that," he continued. "And I respect those sentiments. But Jesus is there nailed to the cross and from there he does not let us down."

"I have no more words to tell you," he said. "Let us look to Christ. He is the Lord. He understands us because he underwent all the trials that we, that you, have experienced."

Speaking to local media before the pope's Mass Saturday, Tacloban mayor Alfred Romualdez said that "easily one million" people came out to celebrate with the pope. Because of the weather conditions, Romualdez said, there were concerns that some might be suffering from Hypothermia due to the intense rain.

One woman was killed while leaving the Mass as scaffolding holding one of the speakers for the amplification system fell on top of her. The woman, a Filipino named Kristel Padasas, worked in the regional office of Catholic Relief Services, the U.S. bishops' relief agency.

Jesuit Fr. Federico Lombardi, the Vatican spokesman, said at a press briefing Saturday evening that the pope was saddened by the woman's death and would be expressing his sadness to her family.

The spokesman also said the pope had been told Friday that conditions in Tacloban might be difficult because of the weather, but responded: "I have come to the Philippines before all to be in Tacloban tomorrow. We have to fly there in any case."

Lombardi said people in Tacloban had also suggested the pope might celebrate Mass somewhere inside, with use of large television screens to show the Mass to crowds outside.

"Absolutely no," Lombardi said the pontiff replied. "It is impossible. Where are the people? They are outside. We have to be with them and celebrate with them."

Despite the conditions, Francis descended from the papal plane Saturday without any protective rain gear or even an umbrella. Later, as he processed through crowds covered in plastic yellow ponchos, the pontiff donned a similar poncho over his vestments.

In order to try and protect Francis, organizers of the event at the last minute moved the altar under a slightly sheltered area. They also moved distribution of Communion to the end of the Mass, to allow the pope to return to the sacristy more quickly.

But the pontiff instead took to the popemobile following the Mass, traversing the rain to greet people in the crowd.

While some had hoped Francis might use the occasion in Tacloban to address global climate change, to which some scientists have attributed to the unusual fierceness of Haiyan, the pope instead kept his homily personal -- choosing to try and address the pain of many who had suffered through the storm.

Francis said that besides Jesus, people who are suffering also have the support of the Virgin Mary.

"In the moments where we have so much pain, where we no longer understand anything, all we can do is grab hold of her hand firmly and tell her, 'Mom,' as a child does to her mother when he or she feels fear," said the pope.

"It is perhaps the only word that we can say in such difficult times, 'Mother, mom,'" he continued. "Let us look to our mother, and like that little child let us grab hold of her skirt, and with a true heart say: 'Mother.' "

Francis also thanked the many who had offered support to those suffering from the typhoon.

"We also have many brothers who in this moment of catastrophe came to help you," said the pope. "And also we, because of this, we feel more brothers and sisters because we helped each other."

"This is what comes from my heart," the pope concluded. "And forgive me if I have no other words to express this."

Francis is visiting the Philippines, Asia's largest Catholic nation, Thursday-Sunday in the second visit of a two-part Asian voyage that first saw him visit Sri Lanka earlier in the week.

The pope is returning to Manila on Saturday afternoon, after having lunch in Tacloban with victims of the 2013 Typhoon.

While Francis was originally scheduled to stay in Tacloban for several more hours, primarily to have a meeting at the city's cathedral with priests and religious, he returned much earlier so as to try and avoid the brunt of Saturday's storm.

On Sunday, the pontiff will celebrate a public Mass in Manila's Rizal Park, an event the Vatican has called a "mega Mass" that is expected to draw crowds in the millions.