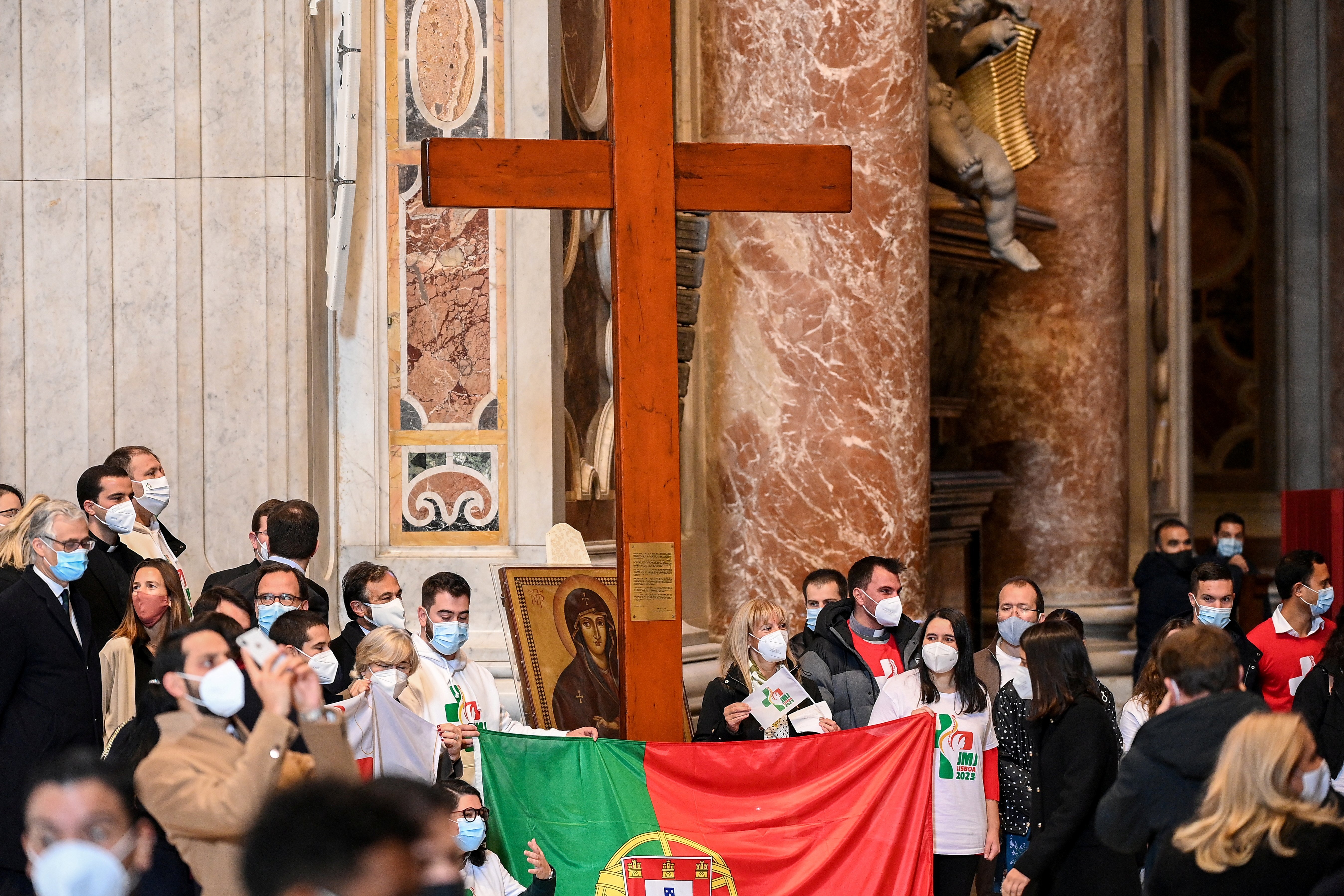 Young people from Portugal are pictured with the World Youth Day cross and their country's national flag following the cross' handover from their Panamanian peers at the end of Pope Francis' Mass Nov. 22, 2020. (CNS photo/Vincenzo Pinto, Reuters pool)

Pope Francis told young people that, with Jesus, people can find the courage to swim against the current, to be free and authentic, and to stand up for their dreams and ideals of truth, love, justice and peace.

"Be the critical conscience of society. Don't be afraid to criticize. We need your criticism," he said, citing for example, the disapproval coming from many young people about environmental destruction. "Be passionate about truth, so that, with your dreams, you can say, 'My life is not captive to the mindset of the world. I am free, because I reign with Jesus for justice, love and peace!'"

Celebrating Mass on the feast of Christ the King in St. Peter's Basilica Nov. 21, the pope directed much of his homily to the world's young people. This was the first year that the world's dioceses were celebrating World Youth Day on the local level on the feast of Christ the King rather than on Palm Sunday. Pope Francis had announced the change last year.

As the church begins its journey toward the next intercontinental celebration of World Youth Day in Lisbon in 2023, the pope asked that young people to reflect on the image in the day's Gospel reading of Jesus standing before Pontius Pilate and declaring, "I am a king."

"We are struck by Jesus' determination, his courage, his supreme freedom," the pope said, because he could have tried to defend himself or compromise to avoid being condemned to death.

Instead, Jesus did not hide his identity and he took responsibility for his own life and for his mission to testify to the truth, he said.

Jesus came without duplicity to show his kingdom is different from the kingdoms of the world," the pope said. "God does not reign to increase his power and to crush others; he does not reign by force of arms. His is the kingdom of love," a kingdom of people who give their lives for the salvation of others.

Pope Francis encouraged young people to let Jesus' freedom "resonate within us, to challenge us, to awaken in us the courage born of truth." He encouraged everyone to look for and face the truth about themselves: what they are ashamed of, the ways they may be deceitful or duplicitous and the ways they displease God.

"It is good to stand before Jesus, who is truth, in order to be set free from our illusions," to see life as it really is, "and not be deceived by the fashions of the moment and the displays of consumerism that dazzle but also deaden," he said.

Pope Francis urged young people not to be "enchanted by the sirens of the world, but to take our lives in hand, to 'take a bite out of life,' in order to live it to the full!"

With the freedom of Jesus "we find the courage we need to swim against the current," which is "not the daily temptation to swim against other people, like those perpetual victims and conspiracy theorists who are always casting blame on others," he said. It is going against "the unhealthy current of our own selfishness, closed-mindedness and rigidity that often seeks like-minded groups to survive."

One swims against the tide "so as to become more like Jesus. For he teaches us to meet evil only with the mild and lowly force of good. Without shortcuts, without deceit, without duplicity," the pope said.

"Our world, beset by so many evils, does not need any more ambiguous compromises, people who move back and forth like the tide — wherever the wind blows them, wherever their own interests take them — or swing to the right or left, depending on what is most convenient, those who 'sit on the fence,'" he said.

"You have been entrusted with an exciting but also challenging task: to stand tall while everything around us seems to be collapsing; to be sentinels prepared to see the light in night visions; to be builders amid the ruins; to be capable of dreaming," the pope told young people.

He thanked them for working courageously "to make your dreams come true," to make the world more beautiful, humane and fraternal, to heal the wounds of God's creation, to protect the dignity of the vulnerable and to spread the spirit of solidarity and sharing.

"Thank you above all, because in a world that thinks only of present gain, that tends to stifle grand ideals, you have not lost the ability to dream! This helps us adults, and the church as well," which also needs to dream and be filled with youthful enthusiasm to be witnesses of the God who is always young, he said.

During his Angelus address with visitors gathered in St. Peter's Square, the pope was joined by two young people from the Diocese of Rome.

In his greetings after the noonday prayer, he said he hoped all young people around the world can feel they are an integral part of the church and active protagonists in its mission.

"And do not forget that to reign is to serve," he said.