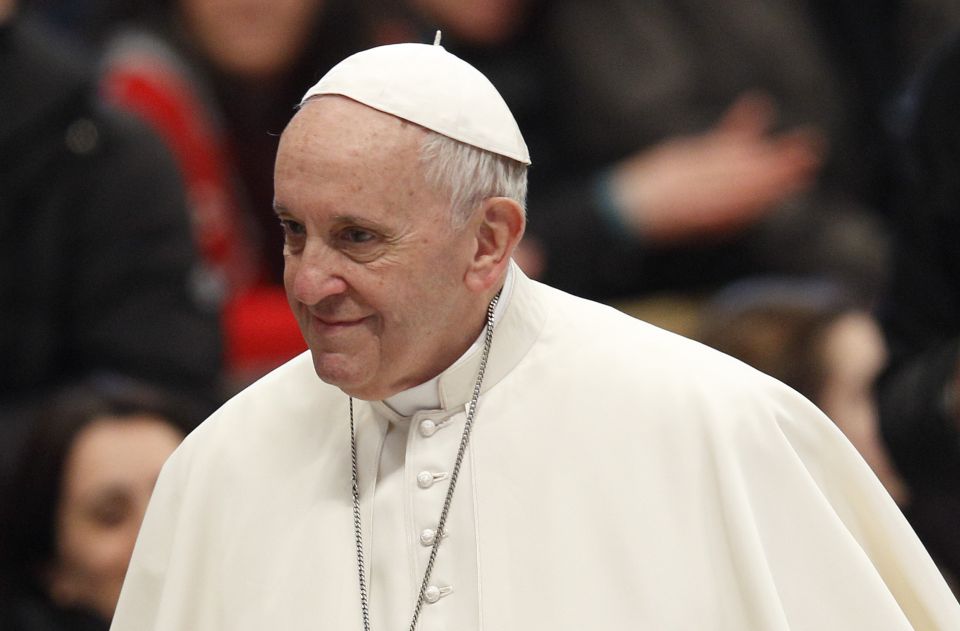 Pope Francis is pictured during his general audience in St. Peter's Basilica at the Vatican Feb. 28. The pope led the main part of the audience in Paul VI hall but greeted an overflow crowd in the basilica. (CNS/Paul Haring)

Vatican City — God asks so little of people and yet, he gives so much in return, Pope Francis said.

"He asks for our goodwill in daily life, he asks us for an open heart, he asks us to be willing to be better," the pope said at his weekly general audience at the Vatican Feb. 28.

Because of ice and unusual freezing temperatures in Rome, Francis held the audience in the Vatican's Paul VI hall. But the Vatican also opened St. Peter's Basilica to accommodate the overflow. Giant screens were set up in the basilica so the people could follow the audience, and later the pope went to the basilica to greet and bless those inside.

"It's better to be here than in the cold, right?" he asked those in the basilica.

In his main talk, the pope continued his series on the Mass, focusing on the Liturgy of the Eucharist, which begins with the preparation of the gifts of bread and wine that are then consecrated and distributed to the faithful at holy Communion.

During the Mass, the priest represents Christ and does what the Lord did at the Last Supper: takes up the bread and wine to give to his disciples, saying "this is my body, this is my blood. Do this in memory of me," the pope said.

It's good, he said, that the people of God present the priest with the bread and wine for consecration because the elements represent "the spiritual offering of the church." At the offertory, all the faithful are invited to present their own lives as a spiritual offering together with the gifts brought to the altar, he said.

"The center of the Mass is the altar and the altar is Christ. Always look at the altar," which also represents the cross where Jesus made the ultimate sacrifice, he added.

"To the altar of Christ, we bring the little (there is with) our gifts -- bread and wine -- and they become the plenty -- Jesus himself, who gives himself to us" in the Eucharist, the pope said.

"Of course, our offering isn't much, but Christ needs this tiny amount. The Lord asks for little and he gives us so much."

Catholics should experience the preparation of the gifts at every Mass as an invitation to offer their lives more fully to the Lord so that they would receive from him the grace needed to grow in holiness, encounter others with love and compassion and to "build the earthly city in the light of the Gospel," the pope said.

After a summary of the pope's talk was read in Arabic, the pope asked everyone to pray for all the people of Syria and the Middle East -- "a martyred land."