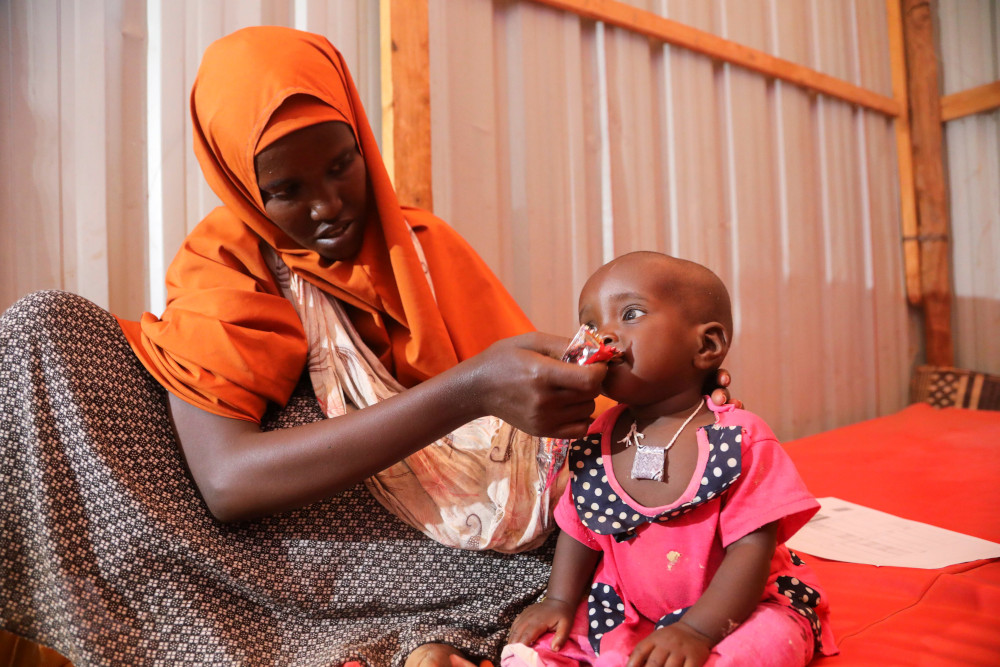 A displaced Somali woman feeds her child in a shelter during a severe drought near Dollow May 26. (CNS/Reuters/Feisal Omar)

Pope Francis called on the international community to help the people of Somalia who are at risk of famine due to severe drought.

"The populations of this region, who already live in very precarious conditions, now find themselves in mortal danger due to drought," the pope said Aug. 14 during his Sunday Angelus address.

"I hope that international solidarity can respond effectively to this emergency," he said. "Unfortunately, war diverts attention and resources, but these are the objectives that demand the utmost commitment: the fight against hunger; health; and education."

According to an Aug. 5 report by the U.N. Food and Agriculture Organization, the rise in food insecurity brought on by the drought has caused "more than 900,000 people to flee their homes in search of humanitarian assistance since January last year."

As conditions worsen, "people living in eight areas of the country could be experiencing famine by September," the organization said.

"We cannot wait for famine to be declared; we must act now to safeguard livelihoods and lives," Rein Paulsen, director of the FAO, said in a statement. "We are deeply concerned about the drought situation and how vulnerable households are being affected."

In an interview with Vatican News published Aug. 12, Bishop Giorgio Bertin, apostolic administrator of Mogadishu, Somalia, said the drought is "one of the worst in the last 40 years."

Furthermore, the risk of famine has also worsened due to a fragile government as well as repeated attacks across Somalia by the al-Shabab terrorist group.

Bertin said that, despite the difficulties, the Catholic Church is mobilizing efforts to assist the people of Somalia, especially those forced to flee their homes.

He also said he met with Archbishop Antoine Camilleri, apostolic nuncio to Ethiopia and Djibouti and apostolate delegate for Somalia, to discuss the dire circumstances.

"I urged the nuncio that he inform the Holy See and the Holy Father directly, so that attention to this part of the world does not fade," Bertin told Vatican News.