Poverty, not presents, is at heart of Christmas celebration, pope says 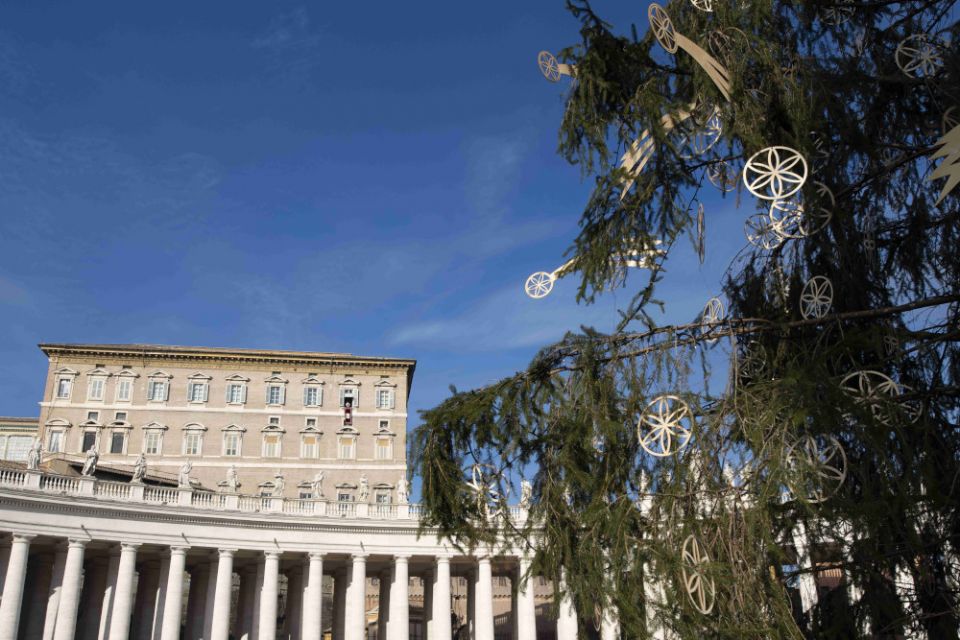 The Christmas tree is seen as Pope Francis leads the Angelus from the window of his studio overlooking St. Peter's Square at the Vatican Dec. 20, 2020. The pope said that current restrictions caused by the COVID-19 pandemic can help people put Christ, rather than the constant need to purchase gifts, at the center of the Christmas season. (CNS/Vatican Media)

Vatican City — Current restrictions due to the COVID-19 pandemic can help people put Christ, and not the constant need to purchase gifts, at the center of the Christmas season, Pope Francis said.

During his Sunday Angelus address Dec. 20, the pope told pilgrims gathered in St. Peter's Square that instead of complaining or buying "the umpteenth gift for ourselves and our friends," Christians should do something for the less fortunate "whom no one thinks of."

"In order for Jesus to be born in us, let's prepare our hearts, let's pray, let's not be swept up by consumerism," he said. "It is Jesus that is important. Consumerism is not found in the manger in Bethlehem: there is reality, poverty, love."

Before concluding his address, the pope called on the international community to help hundreds of thousands of maritime workers who are "stranded on ships, beyond the terms of their contracts, and are unable to return home" due to the pandemic. 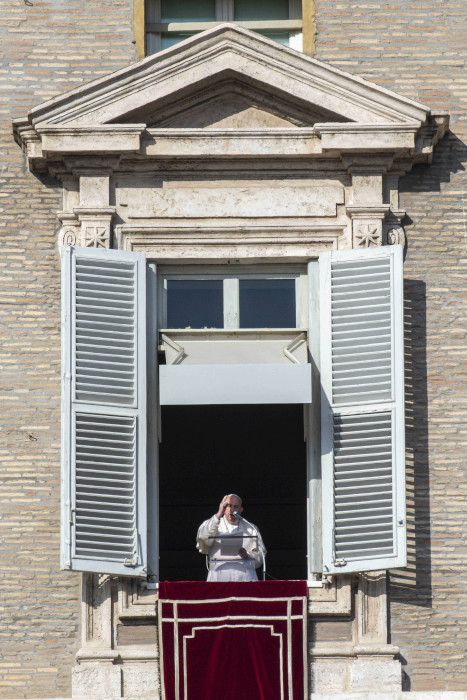 Pope Francis delivers his blessing as he leads the Angelus from the window of his studio overlooking St. Peter's Square at the Vatican Dec. 20, 2020. The pope said that current restrictions caused by the COVID-19 pandemic can help people put Christ, rather than the constant need to purchase gifts, at the center of the Christmas season. (CNS/Vatican Media)

"I ask the Virgin Mary, Stella Maris, to comfort these people and all those in difficult situations, and I urge governments to do all they can to enable them to return to their loved ones," he said.

According to the U.N. International Maritime Organization, an estimated 400,000 seafarers around the world are stranded on their ships while a "similar number of seafarers are stuck at home, unable to join ships and provide for their families."

In a statement marking Human Rights Day Dec. 10, Kitack Lim, the maritime organization's secretary general, said that while maritime workers have been on the frontline of the pandemic, delivering food, medicine and goods, their "human rights have been put in jeopardy."

"Failure to protect the rights of seafarers, fishers and other marine personnel and resolve the crew change crisis will have a detrimental effect on ship safety and the global supply chain. The longer the situation persists, the worse those effects will be," Lim said.

In his talk before praying the Angelus prayer, the pope reflected on the Sunday Gospel reading from St. Luke which recounted the Annunciation. While the angel's announcement that she will bear the son of God was one of joy, it also foretold a great trial for Mary.

Mary's response was not resignation nor did she "express a weak and submissive acceptance, but rather she expresses a strong desire, a vivacious desire."

"She does not submit to God; she binds herself to God. She is a woman in love, prepared to serve her Lord completely and immediately," he said. "She could have asked for a little time to think about it, or even for more explanations about what would happen; perhaps she could have set some conditions. Instead, she does not take time, she does not keep God waiting, she does not delay."

Francis said that Mary's promptness in accepting God's will is an invitation for Christians to not procrastinate, especially in spiritual life when one is tempted to leave acts of charity or prayer for the next day.

"Today, on the threshold of Christmas, Mary invites us not to postpone, but to say 'yes,'" the pope said. "Every 'yes' costs something, every 'yes' has its cost, but it always costs less than what that courageous and prompt 'yes' cost her, that 'let it be to me according to your word,' which brought us salvation."

Vatican | Poverty, not presents, is at heart of Christmas celebration, pope says