Francis to visit Malta in May, in trip likely to highlight migrants' struggles 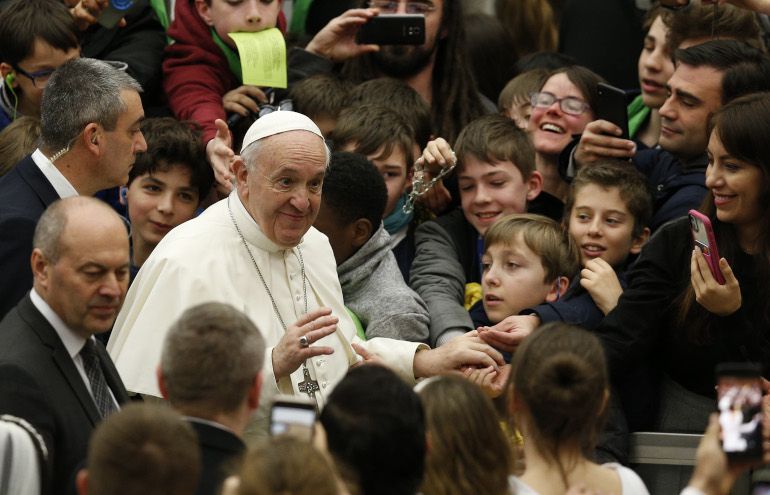 Pope Francis greets the crowd as he arrives for his general audience in Paul VI hall at the Vatican Feb. 5, 2020. (CNS photo/Paul Haring)

Vatican City — Pope Francis will visit Malta at the end of May, making his first trip abroad in 2020 to a small island nation at the forefront of a continued surge of migrants and refugees across the Mediterranean.

In an unexpected Feb. 10 announcement, the Vatican said the pontiff will visit the country May 31, the day Catholics celebrate Pentecost this year.

Malta, a European Union country located about 100 miles south of Sicily, has at times been in dispute with the other 26 EU-member nations about who should welcome migrants rescued in the Mediterranean by volunteer ships.

Announcement of the papal trip comes only a week after one ship carrying 363 rescued migrants, operated by the non-profit organization Open Arms, said it had been refused permission to dock in Malta, and was forced instead to continue to the southern Sicilian port of Pozzallo.

Francis has frequently warned that the Mediterranean is turning into a "cemetery" for migrants, many of whom are trying to escape violence in North Africa or the Middle East in makeshift rafts or dinghies.

The pontiff made his first visit outside Rome as pontiff in 2013 to the Italian island of Lampedusa, located to the west of Malta and the initial landing point of hundreds of thousands of migrants.

Malta has a special place in Christian history, as it is mentioned in the Acts of the Apostles as the place where St. Paul was shipwrecked on his way to Rome in about 60 AD. The Vatican said Francis' visit would carry the theme "They should us unusual acts of kindness," taken from how Acts describes the Maltese people's treatment of Paul and his companions.

In a video welcoming the pontiff to Malta, shot from inside the cave where Paul is said to have stayed for three months, Archbishop Charles Scicluna said the pope's visit will be a reminder to "welcome migrants who knock on the shores of our islands seeking a safe haven and human dignity."

"This is a tall order for a small nation but we will … commit ourselves to be that safe haven in the Mediterranean," said Scicluna, the archbishop of Malta.

The Republic of Malta, an archipelago with two main islands, Malta and Gozo, has a population of about 475,000, and a land area of about 122 square miles.

Maltese Catholics, though a small population, have played a significant role in Francis' nearly seven-year papacy.

Scicluna, considered the Vatican's leading investigator of clergy sexual abuse, was appointed an adjunct secretary of the powerful Congregation for the Doctrine of Faith by Francis in 2018. Bishop Mario Grech, formerly the head of the diocese of Gozo, was named by the pope as the pro-secretary general of the Synod of Bishops last October.

As yet, there are no other confirmed trips abroad on Francis' calendar for 2020, but the Vatican is known to be preparing a likely combined visit to Indonesia, East Timor and Papua New Guinea for September.

The pontiff has also expressed a desire to visit both Iraq and South Sudan this year.

Vatican | Francis to visit Malta in May, in trip likely to highlight migrants' struggles

Your thoughts on celibacy and the two popes