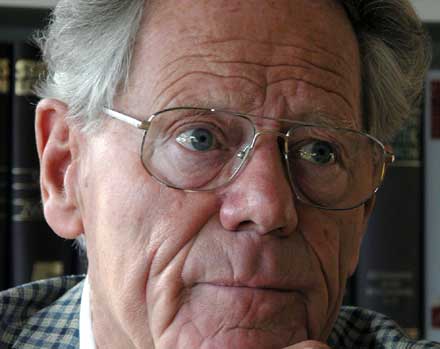 VATICAN CITY
The dissident theologian Father Hans Kung has criticized Pope Benedict XVI as isolated and unable to take creative steps to deal with a series of internal church questions, including priestly celibacy and birth control.

Father Kung said the pope's recent lifting of the excommunications of four traditionalist bishops illustrated the pontiff's desire for a smaller and purer church, and his inability to make necessary reforms.

"The church risks becoming a sect. Many Catholics no longer expect anything from this pope. It's very sad," Father Kung said in an interview published by the French newspaper Le Monde Feb. 24.

His remarks drew a sharp comment from the dean of the College of Cardinals, Italian Cardinal Angelo Sodano, who told Vatican Radio he felt "wounded" when he read the interview.

"Fraternal criticism has always been possible in the church, from the times of Sts. Peter and Paul. Bitter criticism, on the other hand, especially when it's so broad, does not contribute to the unity of the church, for which Pope Benedict is working so hard," Cardinal Sodano said.

Father Kung, who has taught in Germany for decades, has frequently challenged official church positions on papal infallibility, birth control, priestly celibacy and the all-male priesthood. In 1979 the Vatican withdrew permission for him to teach as a Catholic theologian, although it did not restrict his ministry as a Catholic priest.

Father Kung has known Pope Benedict for some 50 years, and the two met in 2005 for what the Vatican described as a "friendly" encounter.

In the interview with Le Monde, Father Kung noted that one of the four traditionalist bishops whose excommunication was lifted by the pope has minimized the Holocaust, provoking widespread criticism. The pope's misjudgment on such an important issue, Father Kung said, reflected his own isolation.

"Benedict XVI has always lived in an ecclesial environment. He has not traveled much. He's always remained closed in the Vatican -- which is quite similar to how the Kremlin was at one time -- where he is safe from criticism," Father Kung said.

In any case, he said, the lifting of the excommunications was not a mistake in communications or tactics, but an error in church governance. He said it was "scandalous" that on the 50th anniversary of the convening of the Second Vatican Council Pope Benedict moved to reintegrate people who were opposed to the council's teachings.

Father Kung said that in his nearly four years in office the pope has shown a lack of pastoral courage and a lack of awareness of the "profound crisis" in the church. He suggested that the pope could make several important gestures:

-- Allow divorced and remarried Catholics to receive Communion in some circumstances.

-- Take steps to "correct" the 1968 encyclical "Humanae Vitae" and allow use of birth control in some cases.

-- Abolish the rule of priestly celibacy in the Latin-rite church.

-- Institute a new way of electing bishops with the involvement of local Catholics.

Father Kung said it would be helpful to call a third Vatican council to deal with these and other issues.

Crime and punishment in the church gets a new look