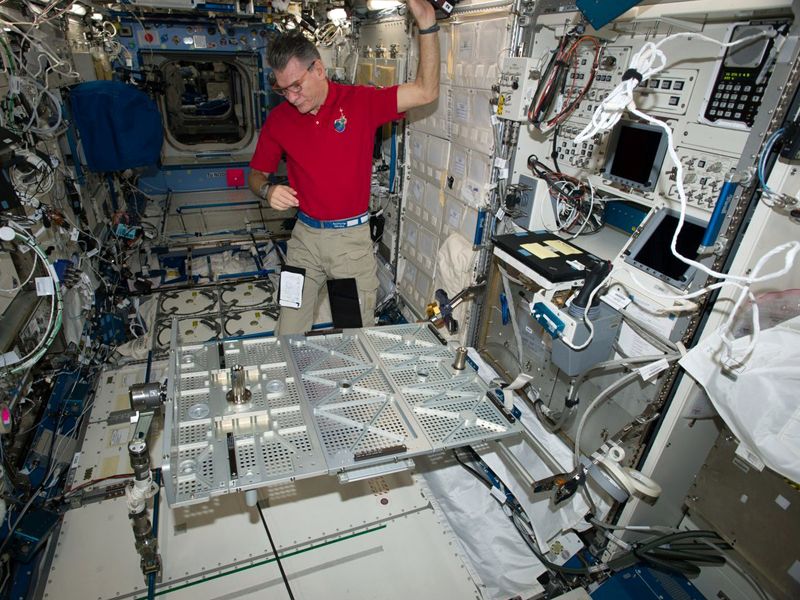 In this photo provided the European Space Agency on Wednesday, Oct. 25, 2017, Italian astronaut Paolo Nespoli looks at the Multipurpose Transporting Plate aboard the International Space Station. Pope Francis is making his first phone call off the planet - and into space. Nespoli was aboard the orbiting lab for the first papal call from Benedict XVI, and he's back up there again, along with three Americans and two Russians. (European Space Agency via AP)

CAPE CANAVERAL, Fla. — Pope Francis is making his first phone call off the planet — and into space.

On Thursday (Oct. 26), the pope will reach out to the six astronauts on the International Space Station. It will be only the second time a pope phones the heavens like this. Pope Benedict XVI called the space station in 2011.

Italian astronaut Paolo Nespoli was aboard the orbiting lab for the first papal call, and he's back up there again, along with three Americans and two Russians.

Francis is known for his out-of-the-blue calls. But this one has been in the Earth-to-space pipeline for a while. The European Space Agency made the arrangements, with NASA's technical support.

A large Roman Catholic contingent led by Cardinal Daniel DiNardo, archbishop of Galveston-Houston, will gather at Mission Control for the long-distance chat.

Fresh from the space station, U.S. astronaut Jack Fischer said his faith grew while he was in orbit. He invited his priest to his Houston homecoming last month, after landing in a Russian capsule on the other side of the world.

"You look out the window and you can't help but feel that we're just one small part of a bigger whole," Fischer said. "Just seeing this mind-blowing beauty of the universe, it grows your faith in ways that it's hard to even describe."

Since his launch in July, Nespoli has posted stunning photos of Italy on Twitter; one of his latest scenery snapshots shows the Alps from 250 miles up.