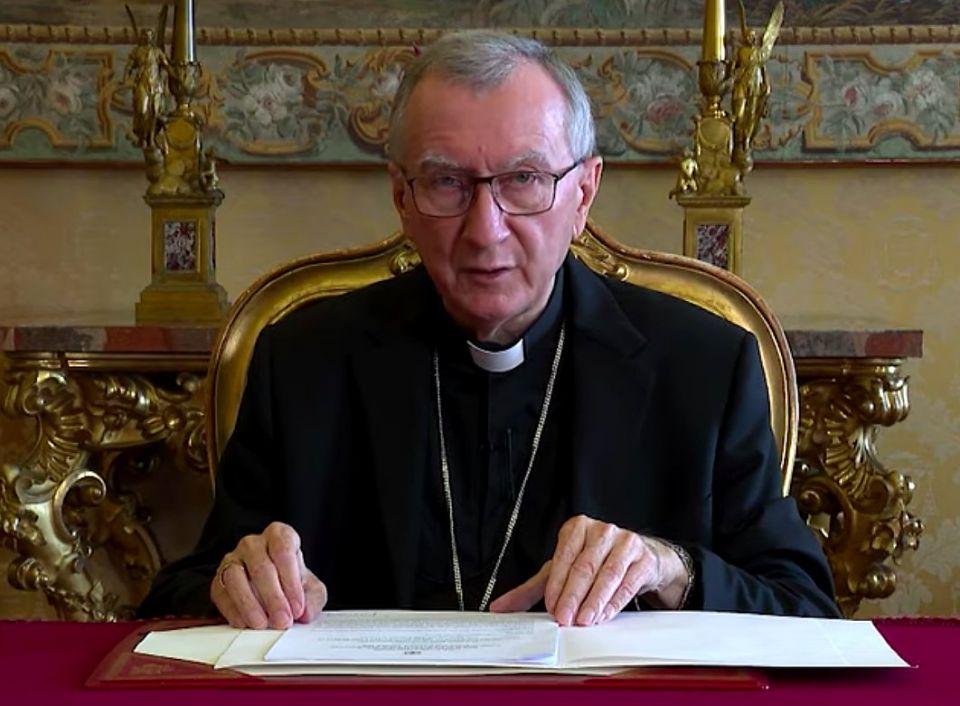 In a video address to the U.N. General Assembly Sept. 25, 2016, Cardinal Pietro Parolin, Vatican secretary of state, called on leaders to work with a "renewed sense of hope" in confronting the current challenges facing the world, including the pandemic, polarization and threats to the environment. (CNS screenshot/Vatican Media)

"Hope keeps us motivated when problems and disagreements seem unsolvable; it facilitates forgiveness, conscious that, through reconciliation, there can be a better future," Cardinal Parolin said Sept. 25 in a video address to the U.N. General Assembly.

The U.N. General Assembly is the main policy-making organ of the organization; it has 193 member states. The Holy See is a permanent observer, meaning that while it cannot vote on resolutions, it can address the General Assembly as well as high-level meetings.

In his address, Cardinal Parolin said world leaders must work with a "renewed sense of hope" in confronting the current trials facing the world, including the pandemic, polarization and threats to the environment.

Reflecting on the assembly's theme, "Building resilience through hope," the cardinal said the pandemic revealed "how interconnected our world is" and insisted world leaders must do more to help vulnerable populations that have not had access to health care or vaccinations.

"Resilience," he said, "calls for an examination of the fragility and shortfalls of our economic systems, which have left many behind as a result of the severe economic downturn and made the poor even more vulnerable."

The pandemic, he continued, also delayed much-needed programs that would help the world reach the U.N. Sustainable Development Goals by 2030.

"Making sustainable development a reality by 2030, which two years ago appeared to be an uphill struggle with no certainty of success, has now become such a daunting challenge that tremendous efforts will be needed," the cardinal said.

Sustainable development, he said, "if truly at the service of the human person, must also incorporate the poor and their gifts and creativity as agents of their own integral development."

Cardinal Parolin said man-made threats, such as climate change and conflicts, also pose a threat to existence, as seen in many parts of the world today, including Afghanistan, Syria and Lebanon, and "entrap regions and countries in a downward spiral."

And, he said, "the damage to our fellow human beings and our planet is a special cause of concern with regard to nuclear arms and biological and chemical weapons."

"The threat of nuclear weapons, possessed under the guise of nuclear deterrence, creates an ethos of fear based on mutual annihilation and poisons relationships between peoples, obstructs dialogue and undermines hope," he said.

Nevertheless, the Vatican secretary of state said, "one of the most serious causes for concern" today is the "crisis of human relationships," which has allowed for a "culture of waste" and a disregard for basic human rights to persist.

"Our societies today are the theater of many injustices where human beings are maltreated, exploited, ignored, killed or left to languish in humanitarian emergencies." the cardinal said.

"We need to build resilience through hope and consensus in this noble institution, while defending human rights and fundamental freedoms, including the right to life, to freedom of thought, conscience and religion, and to freedom of opinion and expression, and not to undermine them," he said.

Cardinal Parolin encouraged the U.N. General Assembly to use hope to benefit everyone rather than yielding "to separatism or partisan interests."

"There will be no peace as long as our alliances are against others, for alliances of some against others only increase divisions," the cardinal said. "Peace does not demand winners or losers, but rather brothers and sisters who, for all the misunderstandings and hurts of the past, are journeying from conflict to unity."