by The Associated Press
Vatican 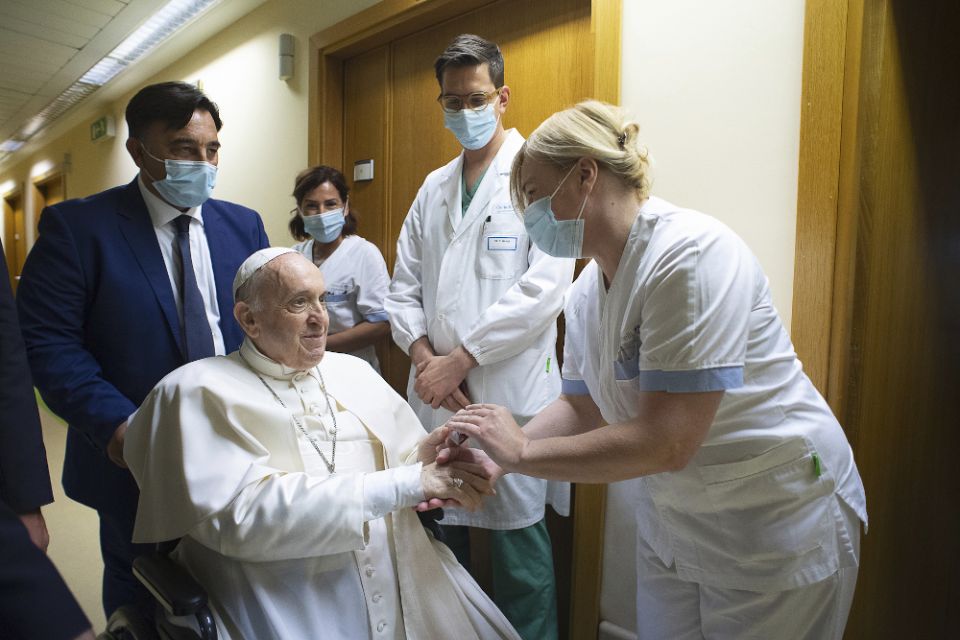 Pope Francis is greeted by hospital staff as he sits in a wheelchair inside the Agostino Gemelli Polyclinic in Rome, Sunday, July 11, 2021. (Vatican Media via AP)

Rome — Pope Francis is expected to return to the Vatican "as soon as possible" following his stay in hospital for rehabilitation from intestinal surgery that he underwent earlier this month, the Vatican said July 13.

The Vatican didn’t provide a target date in its daily medical update, repeating that the 84-year-old pope was continuing his planned course of treatment and rehabilitation.

Francis had half of his colon removed for a severe narrowing of his large intestine on July 4, his first major surgery since he became pope in 2013.

The Vatican had originally said Francis could be released from Rome’s Gemelli Polyclinic by the weekend, but said he would extend his stay to continue his planned treatment.

The 84-year-old appeared for the first time in public since the surgery on Sunday, looking in good form as he delivered his weekly prayer from the 10th floor hospital balcony. He used the occasion to call for free health care for all.

Francis was later seen greeting patients in the hospital corridor, using a wheelchair.

In its statement July 13, the Vatican said Francis was praying especially for people who are bedridden and cannot return home.

"May they live this time as an opportunity, even if experienced in pain, to open themselves with tenderness to their sick brother or sister in the next bed, with whom they share the same human frailty," the statement said.

The Argentine pope had part of one lung removed when he was a young man.

Pope: One act of pure love is greatest miracle Christians can perform