Iowan behind Globetrotters' meeting with pope says event was unforgettable 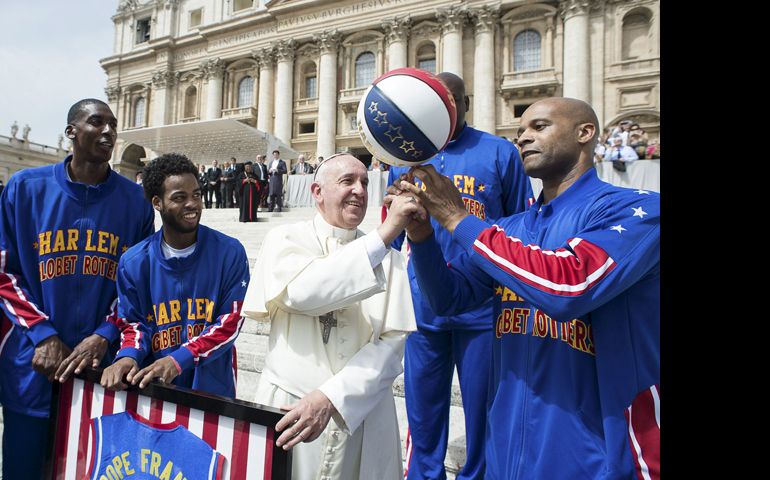 Pope Francis plays with a basketball with members of the Harlem Globetrotters basketball team during his weekly audience May 6 in St. Peter's Square at the Vatican. (CNS/Reuters/L'Osservatore Romano)

Sioux City, Iowa — In 2000, Briar Cliff University grad Brett Meister was given the opportunity to meet a future saint.

If circumstances play out, the Marcus native may claim to have met two.

As senior vice president of communications for the world-famous Harlem Globetrotters, Meister coordinated a meeting with Pope Francis and some of the players.

The team had just completed a record-setting tour of North America, before traveling to Vatican City where they met and named Pope Francis just the ninth honorary Harlem Globetrotter in team history.

May 6 marked the eighth time the Globetrotters have had an audience with a pope -- the most recent in 2000, when St. John Paul II was named the seventh honorary Harlem Globetrotter in team history at the Vatican.

"We are very humbled by the opportunity to bestow this honor upon Pope Francis," said Harlem Globetrotters CEO Kurt Schneider. "His tireless work for the well-being of the poor and elderly, his humanitarian efforts and his commitment to bridge gaps between people of various cultures are ways the Harlem Globetrotters also aspire to touch lives around the world. He embodies the Globetrotters' efforts to provide service, smiles and sportsmanship globally."

The now-49-year-old Meister coordinated the 2000 meeting with St. John Paul. The background on the two invitations to the Vatican were each unique.

"In 2000, I had an 'Iowa assist' from Fr. Patrick O'Kane and Msgr. Dennis Schnurr [now the archbishop of Cincinnati] to make the visit possible, providing guidance and direction," he said. "For the visit in May of 2015, I was able to coordinate with help from Msgr. Peter Dai Bui, who was a pastor at my parish in Arizona before accepting an assignment to work at the Vatican. I am very appreciative of the guidance I received from these gentlemen."

He added, "At the time, I thought it was a once-in-a-lifetime opportunity to meet Pope John Paul II at the Vatican. Little did I know that 15 years later I would get the chance to meet Pope Francis."

Meister confessed to his wonderment at meeting the Polish pope.

"I was completely in awe of Pope John Paul II and soaking in the rich history of the Vatican," he recalled in an interview with The Catholic Globe, newspaper of the Sioux City diocese. "The trip in November of 2000 was actually my first time overseas, but since then, I've been to about 30 countries with the Globetrotters."

At the time St. John Paul moved with difficulty and was less expressive -- symptoms of his Parkinson's disease.

"Pope John Paul was not very mobile at the time, but I remember him playfully grabbing the Globetrotter basketball and smiling," he said.

About the meeting with the current pope, Meister said, "Pope Francis was very energized, genuine and extremely humble. He joked about one of the Globetrotters [Anthony "Ant" Atkinson] being small and everyone laughed," he said.

"I will never forget shaking his hand, and when we said goodbye, he asked us to pray for him," Meister continued. "The two meetings were uniquely different and very special. I'm very fortunate to have two lifetime experiences at the Vatican."

The 1988 Briar Cliff alum was hired by the Globetrotters in November 1997. The team's headquarters are in Phoenix. Meister has family in Iowa, including his parents, Don and Linda Agostine, who live in Marcus and a brother, Corey, and his family, who live outside of Moville. Another brother, Dennis, and his family live in Tulsa, Okla.

Meister said Pope Francis' honorary Harlem Globetrotter accolade recognizes an individual of extraordinary character and achievement who has made an everlasting mark on the world.

Harlem Globetrotters stars Atkinson, Hi-Lite Bruton, Big Easy Lofton and Flight Time Lang met with the pope and presented him with a framed No. 90 Globetrotters jersey following the pope's weekly general audience, before a crowd of over 50,000 in St. Peter's Square.

"The four Globetrotters who met Pope Francis were very appreciative of the opportunity and enjoyed the experience," Meister said. "One of the players, Flight Time Lang, has been with the Globetrotters for 16 seasons, has traveled to over 80 countries with the team and has met a lot of celebrities and dignitaries. He said, 'Meeting Pope Francis was one of the most exciting things I've experienced as a Globetrotter. He was down-to-earth and a great man. Meeting the pope is certainly at the top of the list.' "

[Joanne Fox is managing editor of The Catholic Globe, newspaper of the diocese of Sioux City.]

Pope: Families need fathers who guide, love them through thick and thin