The latest on Vatican scandals 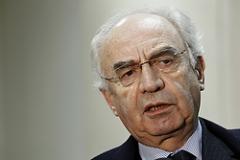 To say that the Vatican seems in turmoil would be putting things mildly, with two stunners in the arc of twenty-four hours last week: The announcement that the president of the Vatican Bank has been unceremoniously fired, and the revelation that a longtime personal servant of Benedict XVI has been identified as the alleged "deep throat" behind the torrid Vatican leaks scandal.

All Hell breaks loose in the Holy See

More from the news wires:

Vatican | The latest on Vatican scandals