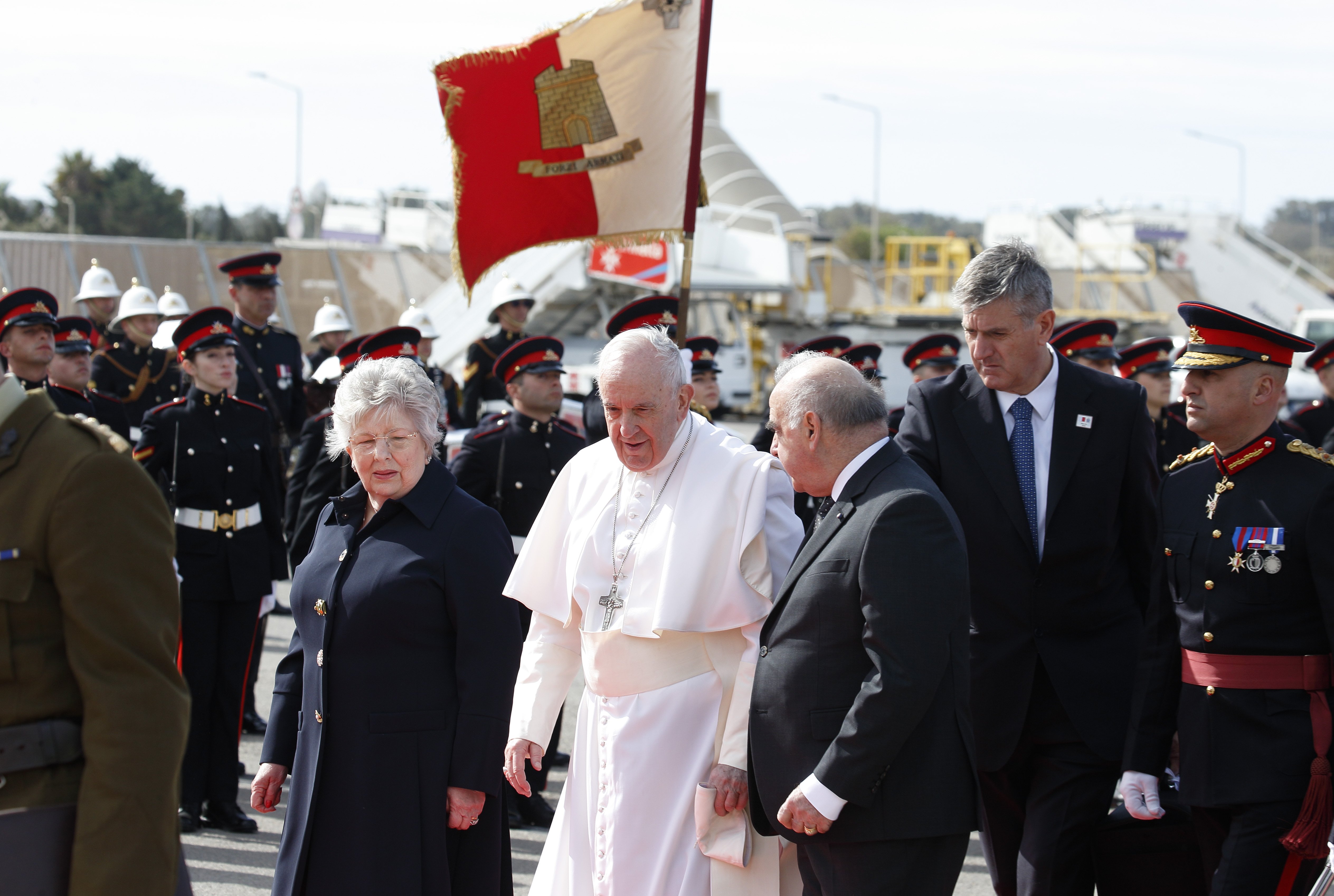 Pope Francis walks with Maltese President George Vella and his wife, Miriam, as he arrives at the international airport in Malta April 2, 2022. The pope was beginning a two-day trip to the Mediterranean archipelago. (CNS/Paul Haring)

VALLETTA, Malta — Pope Francis, while visiting an island rife with tensions over migration, delivered a blistering criticism on April 2 of the "infantile" and "nationalist interests" that have displaced over 10 million people in just over one month as a result of the war against Ukraine.

Without uttering the words Russia or directly naming President Vladimir Putin, the pope condemned those responsible for once more bringing war to Europe.

"Once again, some potentate, sadly caught up in anachronistic claims of nationalist interests, is provoking and fomenting conflicts," the pope said, warning of the risk of an "enlarged Cold War" that poses a threat to all of humanity.

For the last two years, Francis has sought to visit the Mediterranean island of Malta in an effort to spotlight his concerns over migration, one of the signature issues of his nearly decadelong papacy.

The April 2-3 trip, and its thematic focus — originally scheduled for May 2020, but postponed due to the COVID-19 pandemic — has now taken on a new sense of urgency in light of Russia's war against Ukraine, which has forced over 4 million people to flee the country and left another 6.5 million internally displaced.

"The icy winds of war, which bring only death, destruction and hatred in their wake, have swept down powerfully upon the lives of many people and affected us all," he said. "Now in the night of the war that has fallen upon humanity, let us not allow the dream of peace to fade!"

Francis' remarks came during his opening remarks at the country's presidential palace, nearly two hours after touching down in the Maltese capital of Valletta.

"We need compassion and care, not ideological and populist visions fueled by words of hatred and unconcerned for the concrete life of the people, ordinary people," Francis said.

Before departing for Malta on the morning of April 2, the pope met with a group of Ukrainian refugees who are being hosted by the Community of Sant'Egidio in Rome, and on the plane to Malta, Francis told a reporter that a potential visit to the Ukrainian capital of Kyiv is "on the table."

Yet despite his evident concern over the war in Ukraine, the pope also used his opening remarks in the country to address the local situation, where in recent years, ​​thousands of migrants attempting to cross from North Africa into Europe have been rescued at sea and disembarked in Malta.

While the pope acknowledged that some countries are unable to respond to the challenge of accepting new arrivals, he was adamant that a "broad-based and shared response" is needed to respond to the worsening emergency.

On an island that has long boasted of its hospitality and a willingness to welcome new arrivals, the mounting pressure over migration has led to a number of political divisions.

In 2020, Malta entered into a controversial agreement with the government of Libya, pledging to provide more European funding if the North African country would ramp up its efforts to stem the flow of migration.

Sara Zingariello of Jesuit Refugee Services Malta told NCR that in 2022, there have been no new arrivals in the country.

"From the perspective of government and authorities it seems to be a strategy that's working," she said of the Malta-Libya agreement, noting that many migrants intercepted by the Libyan coast guard "often end up in detention centers having their rights abused."

"It's a very complicated situation that we have here at the moment," Zingariello said. A day before the pope's arrival, the country refused to allow a ship with 106 rescued migrants to disembark.

In the presence of the country's top government officials, Francis seemed to concur with Zingariello's assessment.

"Civilized countries cannot approve for their own interest sordid agreements with criminals who enslave other human beings," he said. "The Mediterranean needs co-responsibility on the part of Europe, in order to become a new theater of solidarity and not the harbinger of a tragic shipwreck of civilization."

"Today, when those who cross the Mediterranean in search of salvation are met with fear and the narrative of 'invasion,' and safeguarding one's own security at any price seems to be the primary goal, let us help one another not to view the migrant as a threat and not to yield to the temptation of raising drawbridges and erecting walls," he continued. "Other people are not a virus from which we need to be protected, but persons to be accepted."

During his 20-minute remarks, the pope also touched on a number of other themes close to the heart of a country where over 90% of the population is Catholic.

While Francis praised the country's strong protections for unborn life — it remains the only country in the European Union with a total ban on abortion — he said that protection should extend to all those "cast aside and deprived of care and concern."

"I think especially of the rightful dignity of workers, the elderly and sick," he added.

On an island famous for its natural beauty, Francis also championed his concern for the environment, saying it should "be kept safe from rapacious greed, from avarice and from construction speculation, which compromises not only the landscape but the very future."

The pope also used the occasion to take the wealthy country to task for its reputation for widespread corruption, which has embroiled the island in scandal. In October 2017, journalist Daphne Caruana Galizia was killed in a car bomb after she reported on government ties to offshore companies.

"There is a need to shore up the foundations of life in society, which rests on law and legality," the pope told the civil authorities. "Honesty, justice, a sense of duty and transparency are the essential pillars of a mature civil society."

"May you always cultivate legality and transparency, which will enable the eradication of corruption and criminality, neither of which acts openly and in broad daylight," he pleaded.

Eric LeCompte, executive director of Jubilee USA Network, an interfaith organization advocating for debt relief for developing countries, said that Malta “has a long history of financial secrecy and has served as a tax haven and home of money laundering and facilitator of terrorist financing.”

“Knowing that secrecy and corruption harms the poor and society, he speaks explicitly about these problems," he said, adding that "the island has implemented many reforms and soon global authorities may remove it from the list of notorious countries that launder money.”

Following his meeting with the country’s leadership, the pope traveled by a ferry to the northwestern Maltese island of Gozo, where he led a prayer service for over 3,000 pilgrims at the Marian sanctuary of Ta' Pinu.

There, the pope returned to the theme of migration, saying the Christian nation of Malta should continue “developing the art of welcoming.”

“Welcome is also the litmus test for assessing to what extent the church is truly evangelical,” said the pope.

Against the sun-drenched backdrop of the Mediterranean Sea and in front of the country’s most famous Catholic pilgrimage site, Francis said it is necessary to not only accept people “in the shelter of our beautiful churches.”

Instead, the pope said it was necessary to embrace those “outside,” where people are “condemned and crucified as criminals.”

“Yours is a crucial geographical position,” he said. “You are like a magnet and port of salvation for people buffeted by the tempests of life who, for various reasons, land on your shores. It is Christ himself, who appears to you in the faces of these poor men and women.”

On Sunday, April 3, Francis will visit the grotto of the Apostle Paul, who was shipwrecked on the island about 60 A.D. and, according to the Scriptures, was provided “extraordinary hospitality.”

Prior to heading back to Rome on the evening of April 3, the pope is scheduled to meet with some 200 migrants, where he is expected to again reiterate his central plea for the country to not forget its reputation for welcoming new arrivals.

This story appears in the Pope Francis in Malta feature series. View the full series.
A version of this story appeared in the April 15-28, 2022 print issue under the headline: Francis spotlights concerns over migration. 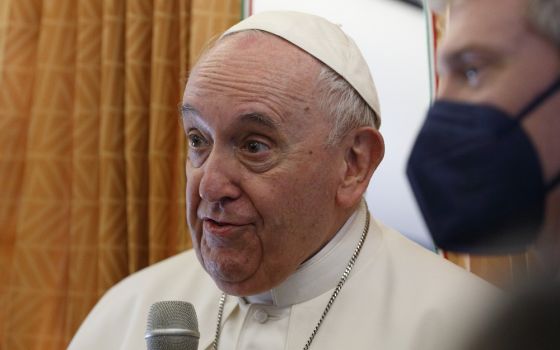 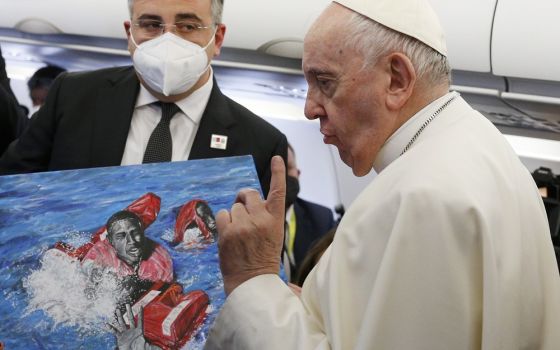 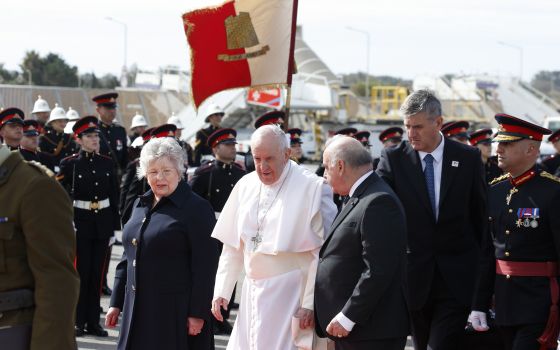 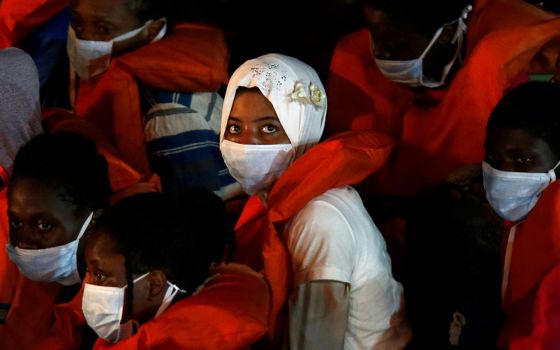