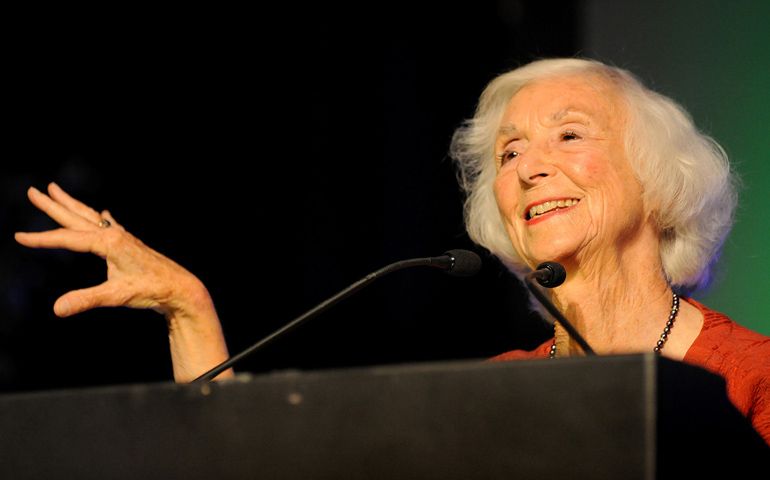 Barbara Marx Hubbard gives the keynote address to the assembly of the Leadership Conference of Women Religious on Aug. 8, 2012, in St. Louis. (CNS/Sid Hastings)
This article appears in the LCWR CDF 2014 feature series. View the full series.

Editor's note: Following is the response of Barbara Marx Hubbard to the comments on conscious evolution made by Cardinal Gerhard Müller during a meeting of officials of the Vatican's Congregation for the Doctrine of the Faith with the presidency of the Leadership Conference of Women Religious (LCWR) on April 30.

I am grateful to Cardinal Gerhard Müller for raising concerns about conscious evolution and its relationship to Catholic teaching. I hope his focus on this issue will stimulate many, both within the Catholic church and outside it, to deepen human understanding of conscious evolution and how we might advance our own evolutionary action for the good of the whole of Earth life.

I am not a Catholic nor a theologian, yet I have been deeply inspired to help develop the meaning of conscious evolution through my studies of Teilhard de Chardin, Ilia Delio, John Haught, Beatrice Bruteau, Fr. Thomas Berry, David Richo, Diarmuid O'Murchu, and others. And of course, from the New Testament itself.

Now, meeting with so many women religious through LCWR, I see conscious evolution in action. They have been evolving the church and the world for hundreds of years through deep gospel living, a mystical presencing, faithfulness in serving unmet needs, solidarity with Earth, building community as "whole-makers," risk-taking for the sake of the mission, genius for cooperative self-governance and decision making, and above all bringing love and hope for the future into the lives of millions.

For me, the most vital source of meaning of conscious evolution is the Catholic understanding of God and Christ as the source of evolution, as its driving force as well as its direction. As Ilia Delio puts it, we experience in evolution the Emergent Christ and God Ahead.

Through science, research, technology communications and virtually every other area of human activity, we are weaving a delicate membrane of consciousness, what Teilhard called the "noosphere" or the thinking layer of Earth that is embracing and drawing into itself the entire planet. It will infuse the whole of humanity with a feeling of relationship and resonance. He called this potential experience "the Christification of the Earth."

Many of us are becoming what Teilhard called "Homo progressivus," those attracted to the future of the world moving toward the unknown, toward ever higher consciousness, freedom, order, and love.

In this view, evolution itself becomes a spiritually motivated labor of love toward a Christ-inspired world, leading toward life ever-evolving beyond this current stage of Homo sapiens sapiens.

Of course the scientific basis for conscious evolution is coming from many fields, most importantly from an understanding of the new cosmology, of the 13.8 billion year "The Universe Story," as written by Brian Swimme and Fr. Thomas Berry, and from "Big Bang Cosmology," as Ilia Delio calls it. Recently, Big History: From the Big Bang to the Present by David Christian, Cynthia Stokes Brown and Craig Benjamin is changing the view of history itself to begin at the origin of creation.

Meanwhile, new technologies are giving us vast new powers we used to attribute to gods, to destroy this world or create new worlds on this Earth and in space, as described in Dr. Ted Chu's new book, Human Purpose and Transhuman Potential: A Cosmic Vision for Our Future Evolution.

The headlines every day make millions of us aware that the crises we face are requiring us to become conscious of our effects on our own evolution, to act out of choice for the good rather than mere chance, or face the destruction of our life support system.

Finally, a new field or meta-discipline is beginning to form around the themes of conscious evolution. Philosophical geniuses like Ken Wilber, originator of Integral Theory, have surfaced as major thinkers of our times. His book A Brief History of Everything has been helpful to me as a beginning text. The work of Sri Aurobindo of India in his masterwork, The Life Divine has revisioned Buddhism and Hinduism from an evolutionary perspective. His partner, the Mother, founded the first evolutionary community, Auroville in India. Hazel Henderson in her website Ethical Markets and recent books, and Elizabet Sahtouris in Earthdance: Living Systems in Evolution have illuminated conscious evolution in the field of economics. Jean Houston has called us to evolve in the field of creativity and human capacity in such books as Jump Time: Shaping Your Future in a World of Radical Change. Jan C. Smuts wrote Holism and Evolution calling us to understand the tendency in nature to form ever more comprehensive whole systems. Buckminster Fuller revealed to us the nature of synergy in evolution and foresaw a world that works for all. Duane Elgin in The Living Universe has illuminated a new vision of the universe.

A new book by Carter Phipps, The Evolutionaries: Unlocking the Spiritual and Cultural Potential of Science's Greatest Idea, reviews leading people in this new field. Steve McIntosh has written a beautiful book called Evolution's Purpose, probing the spiritual nature of evolution itself. Ervin Laszlo has illuminated the scientific and social basis of conscious evolution in over 50 books. An organization of 50 Evolutionary Leaders (evolutionaryleaders.net) has issued a "Global Call for Conscious Evolution" as a world focus.

Yet the meaning and direction of conscious evolution is, for me, coming to us most clearly from the great modern Catholic theologians and thinkers, And most fundamentally, of course, directly from the New Testament: "Behold I show you a mystery, we shall not all sleep, we shall all be changed, in a moment, at the last trump and the trumpet shall sound," as St. Paul told us. The trumpet is sounding upon this phase of human self-centered behavior and growth. We will either evolve more consciously in our lifetimes, or devolve and destroy much of Earth life.

The key question in our time is, I believe, conscious evolution -- that is, how to evolve consciously as a new whole planetary system. What is required now is many convenings of disciplines, faiths, and understandings to gain for the very first time, a sense of shared human responsibility for the destiny of Earth Life. Our new crises and opportunities require all of us to ask ourselves these questions: What is my unique contribution to the conscious evolution of humanity? What is my greater life purpose? What can I do, small or large to contribute toward a positive future for all? What are the purposes of the heart of Christ?

[Barbara Marx Hubbard is president of the Foundation for Conscious Evolution.]

Priests criticize head of doctrinal congregation for rebuke of LCWR

Book explains how Teilhard fit his faith with his experience

Letters to the Editor: Comments on the NCR website