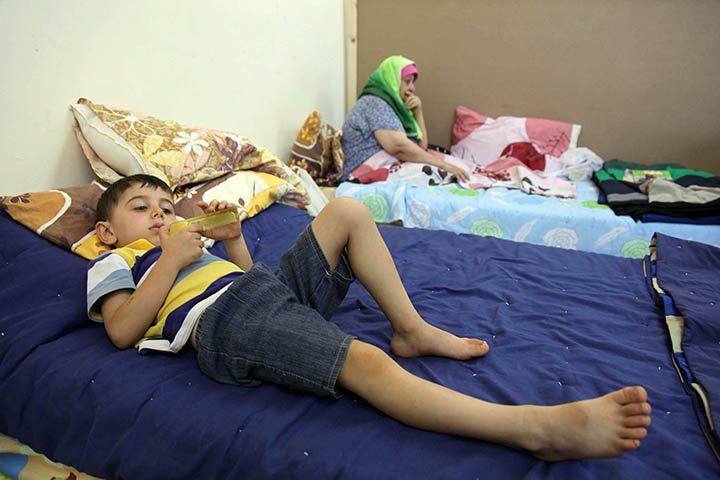 An Iraqi Christian child who fled from violence in Mosul, Iraq, lies on a bed in 2014 at a church in Amman, Jordan. The world continues to be silent in the face of widespread persecution of Christians and other religious minorities, Pope Francis said. (CNS photo/Jamal Nasrallah, EPA)

Share on FacebookShare on TwitterEmail to a friend
The world continues to be silent in the face of widespread persecution of Christians and other religious minorities, Pope Francis said.
One year after Islamic State militants drove thousands of Iraqi Christians and Yezidis out of the country, Francis prayed that people around the world would be more attentive and sensitive to the reality of religious persecution and that "the international community would not stand by mute and unresponsive before such unacceptable crimes."
The pope sent his message to Iraqi refugees who fled to Jordan after the Islamic State campaign in August 2014 sent tens of thousands of people fleeing their homes in the Ninevah Plain of northern Iraq.
According to the U.N. High Commissioner for Refugees, more than 57,000 Iraqis have been given refuge in Jordan.
In his letter, which was released Aug. 6 at the Vatican, Francis thanked those "who took on the care of these brothers and sisters, not turning their gaze away."
The Christian communities in Jordan who are assisting the refugees "proclaim the resurrection of Christ by sharing their suffering and giving them aid," he said. "You bow down to their suffering, which risks suffocating hope."
The pope's message of consolation and encouragement was sent with Bishop Nunzio Galantino, secretary-general of the Italian bishops' conference, who traveled to Amman, Jordan, Aug. 6 to visit Iraqi refugees there and to attend a prayer service Aug. 8 "to remember the first large exodus of persecuted Christians."
Francis said he wanted to take advantage of the bishop's trip to offer "a word of hope to those, oppressed by violence, who were forced to abandon their homes and their land."
Too many times, in too many parts of the world, he said, "atrocious, inhuman and inexplicable persecution" of Christians and other minorities takes place "under the eyes and with the silence of all."
The victims of "fanaticism and intolerance" are today's martyrs, he said, murdered only for their fidelity to Christ.
Francis said he hoped his words and his latest message would be "the sign of a church that does not forget and does not abandon its children who were exiled because of their faith."
The pope said he prays for the refugees each day and recognizes "the witness of faith they offer us."